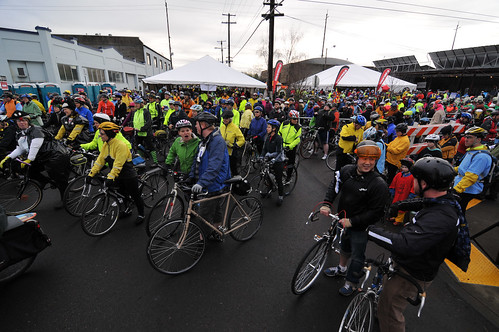 The company, which launched in 2013 when it earned the exclusive contract to manage the City of Portland’s Sunday Parkways events, is now in charge of putting on the Worst Day of the Year Ride, Petal Pedal, Tour de Lab, and the Portland Century. They’ll be operated by Events by Axiom, LLC.

Axiom Event Productions is owned by Brad Nelson and Neal Armstrong. In addition to Sunday Parkways and these four new rides, their company has contracts with an impressive list of organizations including: Bridge Pedal, the Portland Marathon, Bike MS, Mississippi Street Fair, and others.

Armstrong is a former employee of the nonprofit Community Cycling Center. One of the first moves he made after acquiring Good Sports’ rides was to reestablish the organization as the beneficiary of the Worst Day of the Year Ride.

“Worst Day of the Year Ride is a personal favorite of mine from my time at the Community Cycling Center,” said Armstrong in a company statement. He plans to make family and community the focus of the 2018 ride on February 11th that will feature a half-price Family Ride option.

Correction: This post originally stated that Axiom Event Productions managed Filmed by Bike. That is no longer the case. Sorry for any confusion.

I also wish they’d bring back the Night Ride. I did that one 5-6 times, and have great memories of bringing my first child along at least twice. It had a wonderful vibe, both family-friendly and playful partying at the same time. It was always my favorite organized ride.

I’ve heard rumors that the Night Ride was canceled due to liability concerns after someone missed a turn on a poorly lit path, went off the trail and got hurt. Anyone know the real story?

John B
Reply to  GlowBoy

I spoke with Porter about it once, and he mentioned that due to poachers the ride wasn’t breaking even. He mentioned you can’t really police wrist bands or bid numbers in the dark.
It was a fun ride, I also enjoyed the old route that left from Oaks park and looped through SE Portland back when the Bike Gallery sponsored it.

I will miss Porter Child but am happy to learn that these key Portlandesque events are in good hands with Neil+1.

Middle of the Road Guy
Reply to  Todd Boulanger

Neal is a Mensch!

Outstanding news, Brad and Neal. It’s been a pleasure watching you two rise to new levels of success over these years. Keep up the good work!