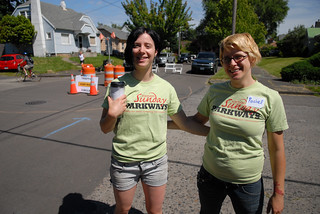 Two of the 870 Sunday Parkways volunteers in 2013.
(Photo by J. Maus/BikePortland)

There’s a new bike event promotion company in town: Axiom Event Productions. While their name isn’t familiar, you surely know about their biggest client so far — the City of Portland’s Sunday Parkways events.

Axiom was conceived last fall by a veteran of the local bike scene, Neal Armstrong. You might recall Armstrong for his work as event and volunteer manager at the non-profit Community Cycling Center that earned him the Skidmore Prize in 2007. After his stint at the CCC, Armstrong spent over four years with Good Sport Promotion, a well-known local company that puts on popular events like the Worst Day of the Year Ride, Tour de Lab, Portland Century, and others.

Back in November, when the City of Portland was looking to renew its volunteer and course management contract for the Sunday Parkways events, Armstrong decided it was time to launch his own company and Axiom was born. He has since teamed up with Brad Nelson, another regular in local bike circles who has worked on major events such as Bridge Pedal and the Portland Jazz Festival (not to mention more minor ones like his fun Bicycle Speed Dating event during the 2008 Pedalpalooza).

Of the many events Armstrong has worked on, he says the five open streets events are “easily my favorite events of the year.” 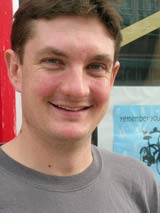 Fortunately for Armstrong, his strategy to build a foundation for his new company around Sunday Parkways worked. Last month the City of Portland Bureau of Transportation awarded Axiom a two-year contract to provide volunteer and course management services for all five Sunday Parkways events. In addition, the $100,000 per year contract calls on Axiom to assist in sponsorship management and communications around the events.

“We truly believe that Sunday Parkways is the pinnacle of community events,” Armstrong shared with us via email, “and this two-year opportunity is the foundation on which we can build our company.”

Armstrong and Nelson will have their hands full. In 2013, Sunday Parkways brought together 870 volunteers who donated 4,655 hours to make the events happen (and that’s for only four of the five events because one was cancelled).

Beyond Sunday Parkways, Axiom will also provide consulting services to other cities looking to jump on the open streets event bandwagon. With a focus on non-profit fundraising rides, Axiom will also be working with Reach the Beach, Bike MS, the Ride to Defeat ALS, and others.

“We know that Portland is full of bike events and bike event producers,” Armstrong says, “but we’re proud of the niche we’ve found ourselves in.”

I wish you the best in this new adventure! It is always great to see new endeavors like this get off the ground.

Guest
Middle of the road guy

I have volunteered with Sunday Parkways several years. Neal is a class act and very easy to work with.

Mazel Tov, Neal and Brad. Can’t wait for SP to get rolling again this year.

Thanks Scott, Paul and Ken. We appreciate it.

I’ve worked with Neal and Brad for many years – totally excited to see the launch of their new endeavor. No doubt it will be fantastic.

Best bike news I have heard in a while!

I hope their focus will be on the biking and not the beer. Too many of Portlands bike events always involve “free” beer. Let biking and the event be the highlight.

I thought he passed away? Truly a pioneer in space.

What a lovely photo of a dear friend and I! The year was 2010, though, judging by the shirt color and my haircut, ha ha! Congrats hugely to Neal, he does the best job prioritizing and managing than anyone I have ever worked with. Looking forward to Axiom’s first season!