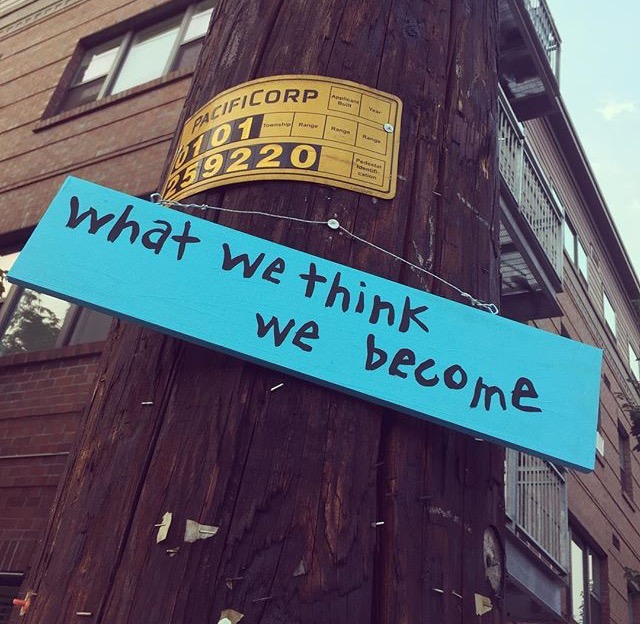 — This post is by our Gal by Bike columnist Kate Johnson.

As a wise film character once said, life moves pretty fast. If you don’t stop and look around once in awhile, you could miss it.

While you’ve been sleeping, guerrilla bikeway artist Dawn Furstenberg has been hard at work to remind you of that fact.

Perhaps you’ve ridden down Clinton or Tillamook a million times, your eyes looking straight ahead. Your mind is wandering — thinking about what you’re going to cook for dinner or which film Hollywood Theater should play in 70mm next. Then you start to wonder, “what does 70mm really mean anyway? And, “did I remember to marinate the tempeh?” And just like that, your commute is over.

I challenge you to look around and take in this beautiful city of ours because, once you do, you may just notice some inspirational artwork to keep you chugging along.

Studded along SE Clinton and NE Tillamook is Furstenberg’s art: messages like “spread love”, “happiness is an inside job”, “stay on your path”, and “be nowhere” written in her signature broadly spaced, artful handwriting. There’s plenty to ponder while pedaling.

Everything changed for Furstenberg after a difficult divorce. She went from driving a Lexus through the never-ending highways of Los Angeles, her home for many years, to trading it for her first bike — a $100 steed she adoringly named “George.” She vividly describes how riding a bike shrunk her world in a positive way. She got to know her north Hollywood neighborhood better — feeling more like a member of a community instead of someone who simply commutes out and back in every day. 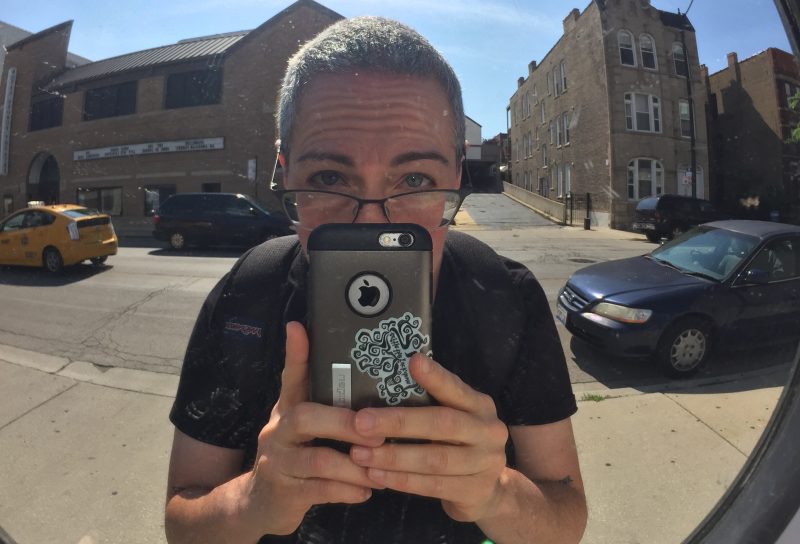 Portrait of the artist as a tourist in Chicago.

As so many of us may know from personal experience, sometimes, when life hands you lemons, you pack up all of the belongings that can fit in a small car and move to a new place. Start over. That’s what Dawn did in 2012 when she made the trek to Portland, following a good friend’s recommendation. She’s been making her mark here ever since.

Sometimes, though, life doesn’t hand you lemons. Sometimes it hands you a bunch of free wood. Cases like these are the times to consider becoming a street artist overnight.

Dawn’s first pieces were strategically placed on a fence related to the construction of the D Street Village Apartments on Southeast Division Street. They were positive words clouding out negativity for a project that caused a lot of stir in our little city. That’s the magic of Dawn’s art: it tries to replace the negative energy with positive.

When that construction came to an end, so did Furstenberg’s art gallery. It wasn’t until one rainy night after the 2016 presidential election that her art would make a comeback on our most beloved Portland bikeways.

For so many of us, negativity after the election was overwhelming. Searching for a way to take that power away from the POTUS, Furstenberg got to work doing the best therapy she knows: art.

Why bikeways? Furstenberg feels that people in cars don’t notice the world around them when they’re driving — her artwork is best seen where people roam more slowly and purposefully.

Like a true renegade, Furstenberg posts most of her work at night, when she can’t sleep. All of her art is up for grabs and for the people. If it moves you, feel free to take it home.

When I asked Furstenberg what she hoped people would get out of her artwork, she said that she hopes her words can help anyone that might be overcoming an inner struggle, having a bad day, or needing an encouraging word. She wants everyone to know that they’re never alone. Art keeps Furstenberg sane, and it can do the same for you.

While you can find Furstenberg’s “road signs to the soul” on Clinton and Tillamook, you can seek out her other artwork in the form of adult coloring books, stickers, and clothing at Wholesome Blend Coffee on 46th and NE Sandy. You can also follow her on Instagram @settledawn, where you can see her adventures as an artist, writer, caffeine goddess, bike rider, and human being.

And if you’re lucky, you might bump into her riding Pinky Tuscadero — George’s lighter, faster replacement. Having a positive attitude, after all, is the opposite of settling for the things you’re already comfortable with.

— Kate Johnson. Read more from her Gal By Bike column.

Made me smile…
…the one technical issue that has allowed for this and similar guerrilla art installations greater longevity is the change in maintenance practices by most PUDs/ phone / electric companies (the owners of the poles) from having “linesmen” climb poles to using lift buckets to access the upper hardware and lines…thus avoiding these signs.

As a regular Clinton commuter, these signs have brought me joy. I’ve speculated with other commuters about the artist and their motivations. Thanks, Dawn!

Ah, I’ve been wondering about those signs. Thank you, Kate, for covering this story, and thank you, Dawn, for enlivening Clinton!

I ride Tillamook regularly and will look for the signs — thanks, Dawn! As a side note, I’ve been driving our car more slowly (the few times I do) and noticed that I would take in much more of the environment that way; I also feel more relaxed. I wish other car driver’s would slow down. It really makes, paradoxically, your commute better.

Aw, I’ve also often wondered who was behind those lovely signs on Clinton:) Thanks for the happy thoughts, Dawn!

thanks for sharing this! i saw “rejection is projection” on clinton one day and just lost it. right place, right time.

I confess, I used to amuse myself as I walked late at night (when we were still living in the neighborhood) by imagining painting over key letters –i.e., this is all your creation/this is your rat; rejection is protection/eject poo; inhale exhale/ha ha; happiness is an inside job/has a nob. Etc., etc. 😉 My apologies. Signed, Sarcastic Local.

The “it’s all about you” one really bothered me. People don’t need any more encouragement to be selfish.

Thank you, Dawn! I was almost sad to have the mystery unveiled. I’ve enjoyed your mini masterpieces daily and they’ve really cheered me. I didn’t know it was okay to take them, but now that I do, you better believe I’ll find a favorite to take home. Renegade artist cyclist, you’ve inspired me.

ah, so happy to read this story, Thanks Kate and Dawn. I love these signs.

I rescued the “rejection is protection” from the trash bin outside the Clinton Market and its now in my backyard. Nice to hear the story behind the signs.