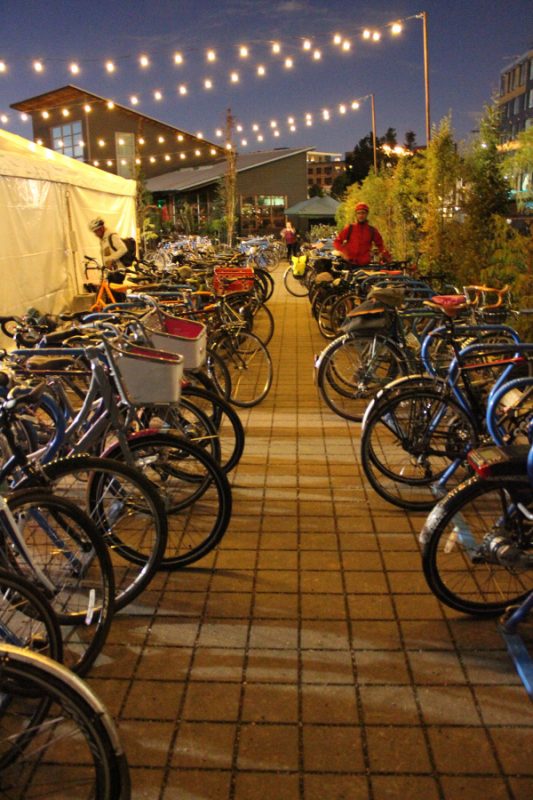 Editor’s note: Gal by Bike columnist Kate Johnson has been a local bike commuter and biking advocate for years, but had never been to The Street Trust’s annual Alice B. Toeclips awards gala until Friday. Here’s her take.

Have you ever been on a TriMet bus at around 3 p.m. on a weekday when, suddenly, you’re engulfed by a sea of teenagers? It’s no longer just a bus ride, it’s a party! All of those teens are likely getting to and from school, work, extracurriculars, and hang outs at no charge, and that’s thanks to the hard work and dedication of the Youth Environmental Justice Alliance. 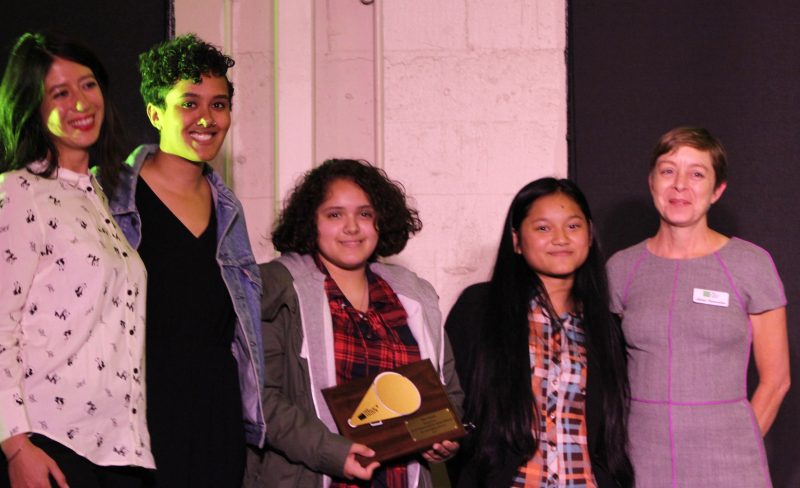 YEJA is a youth-run program, part of OPAL Environmental Justice Oregon, that creates and runs political and social justice campaigns, creating leaders in low-income communities and communities of color through weekly political education and skill-building. On Friday, Portland community members, active transportation advocates, and local leaders came together to honor and celebrate the advocacy and action going on in and around Portland at the annual Alice Awards. YEJA was honored this year for their activism — filling the audience with hope and reminding us all that the future can be very bright indeed. Learn more about the work of YEJA, see how you can help with their mission, or make a donation on their web site.

This year was the first Alice Awards with “The Street Trust” across the marquee. It was billed as the year of “the power of three”: biking, walking, and riding transit. Street Trust Executive Jillian Detweiler spoke with poise, thanking those around her who have inspired her and helped her through this new season. She graciously spoke to the knowledge and skills of those before her. Applause-worthy mentions included the $1 billion for public transit, $125 million in funding for Safe Routes to School programs, the five thousandth child to receive biking and walking education, the 12,445 people that participated in this year’s Bike More Challenge, and the growth of the Women Bike program – now over 1,000 women strong.

“Smart, fiery, and with heart,” Detweiler said. “That is the Street Trust.” 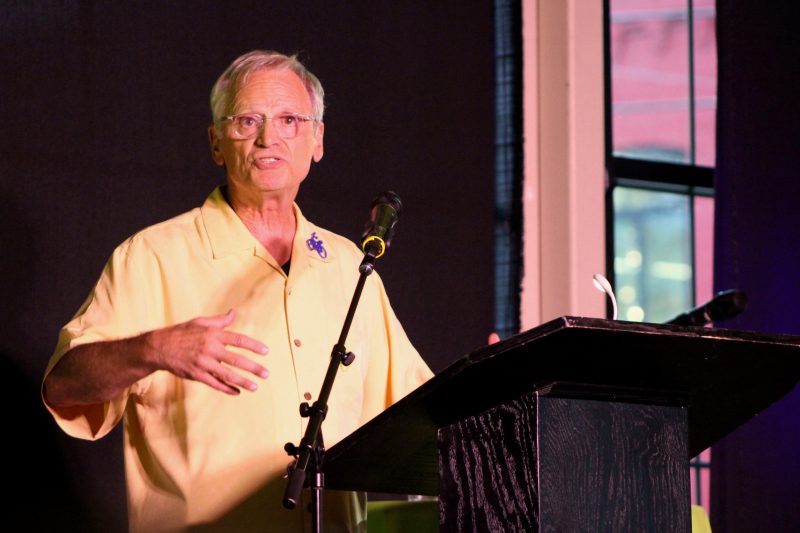 Congressman Earl Blumenauer made an appearance on stage, speaking to the group earnestly and honestly about the responsibility we all share in the future of Portland active transportation. He cited cities across our nation that have taken ideas and inspiration from Portland, but pointed to the challenge of where to go next.

“I don’t want Portland to be a place that, ten years from now, is looked at as a heritage site,” Blumenauer said, pausing to allow his words to sink in.

He finished by urging us all to not give up on our government. In a nod to our current political climate, he simply stated, “it will get better,” before making the first auction donation of the night and exiting the stage through a fog of applause. 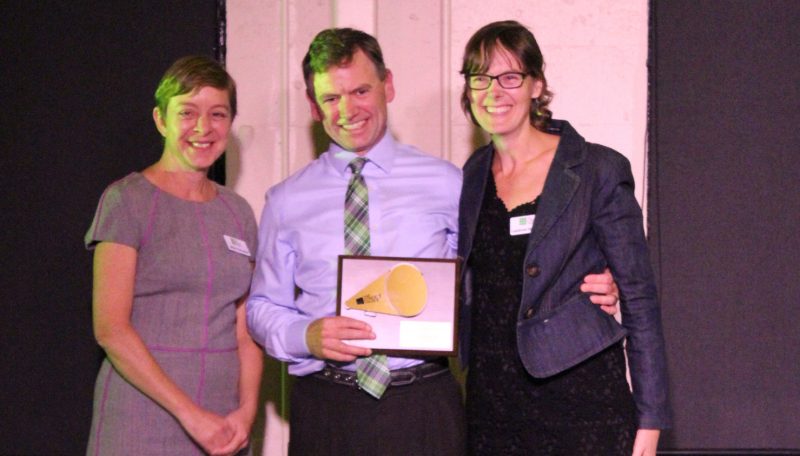 In addition to The Street Trust’s honor for YEJA, Eugene advocate Shane MacRhodes took home the Bud Clark Lifetime Achievement Award. Street Trust Deputy Director LeeAnne Fergason beamed as she introduced her friend and colleague to the stage. If you’ve ever had the pleasure of meeting Shane, you will understand her enthusiasm. Not only is Shane tirelessly dedicated to making streets safer in his community of Eugene and beyond, he is bright beacon of knowledge, help, and support for other advocates. Shane is a doer, consistently active in teaching new riders, kids, families, and adults. Though he was awarded with a lifetime achievement award, one can only assume that Shane is nowhere near done speaking up and showing up for safer streets. 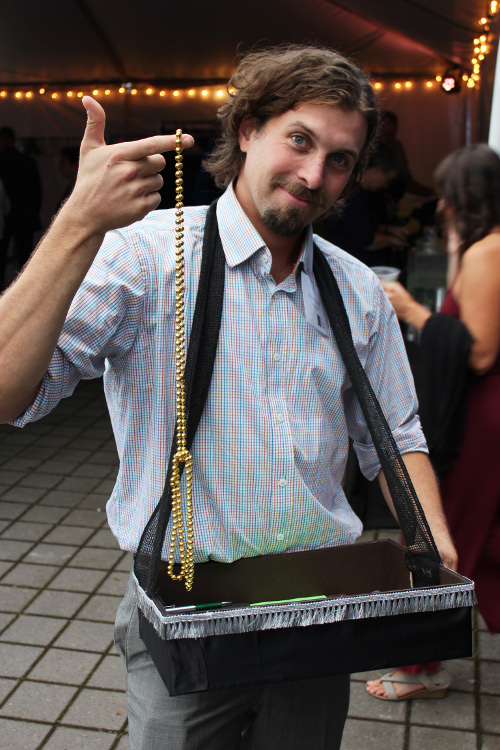 Golden tickets were purchased by hopeful attendees, bidding wars commenced, and auctioneer Dale Johannes brought the hype and a cadence of speech not heard since 90’s pop hit “Scatman.”

Some folks on the scene Friday

Guests enjoyed a new format with stadium seating and a cocktail hour with locally made tapas and free flowing libations. 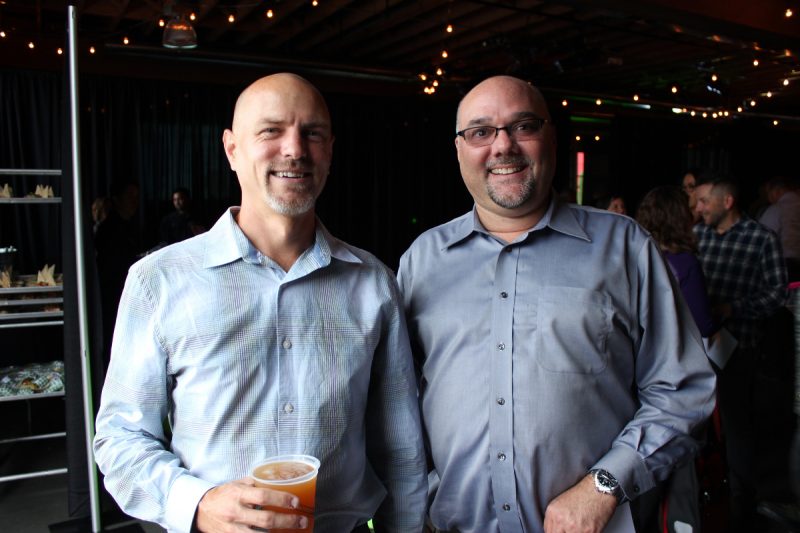 For Phil Richman (left) the active transportation triumph of 2017 has been riding a Biketown bike more than anyone he knows — mostly to and from food carts. 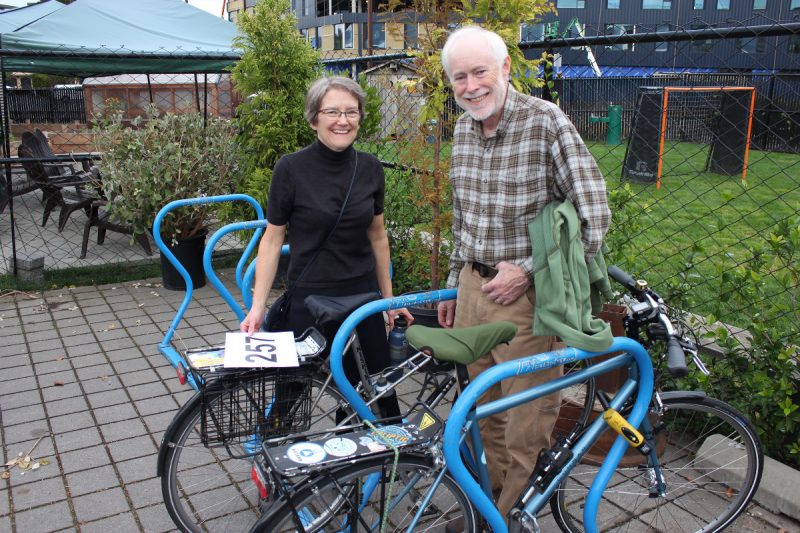 Cathy and Loran Lamb-Mullin have watched Portland’s bike infrastructure be built from the ground up. They’ve been volunteering with The Street Trust for over 18 years. 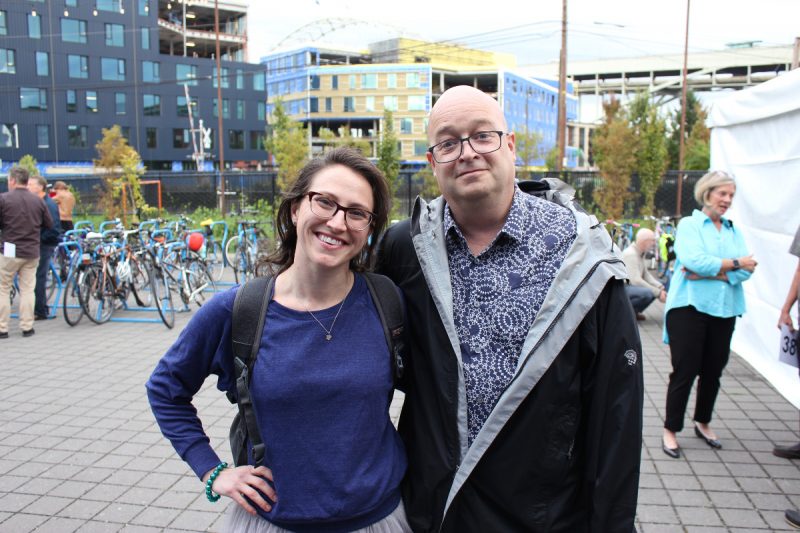 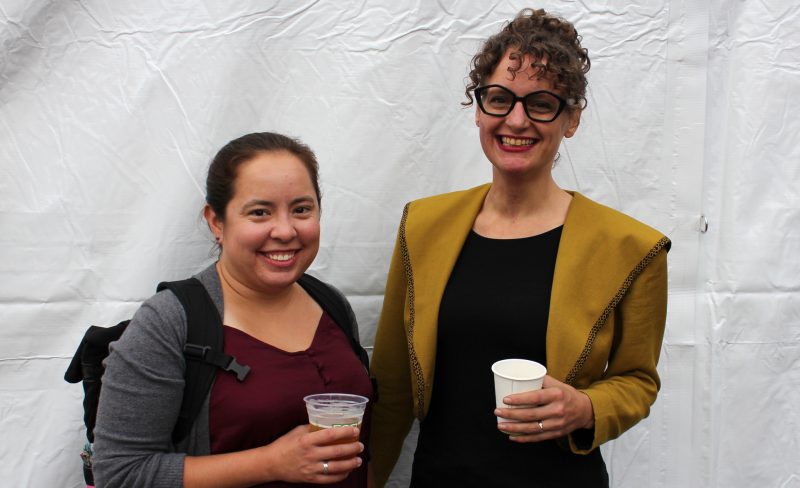 Community Cycling Center Assistant Bike Camp Manager Kelley Goodwin, left, recounted a day when her bike campers took shelter from the thickening smoke on TriMet, teaching her campers yet another way to travel about their city.

Leah Benson of Gladys Bikes, right, is a boss in myriad ways, as the jacket above so obviously denotes.

As another Alice Awards comes and goes, I welcome you to ponder what you, a member of this unique community, will do in the coming year to help advocate for and secure safer conditions for biking, walking, and public transportation in Portland. Look to the doers like the members of YEJA and Shane MacRhodes for inspiration. Come to the table armed with intelligence, fire, and heart. In the words of Congressman Blumenauer: what’s next?

— Kate Johnson. Read more from her Gal By Bike column.

I’ve got some bad news for Earl: Portland isn’t going to be considered a heritage site because it never got far enough along before it stopped. Six percent bike use isn’t going to make history, and there’s no sign that PDX is going to step up with the necessary changes to get any higher.

As far as the lifetime achievement award goes: oh my goodness. Shane is a big part of why Eugene has literally hemorrhaged cyclists over the past decade. We’ve lost 43% of our cyclists since 2009. That’s a lot of cars put on the road (the loss of cyclists, pedestrians and bus riders is slightly greater than the number of cars added). Our youth are not getting on bikes in large numbers and the few who do are abandoning them early.

I’ve watched major projects go in at Eugene School District 4J. For some reason, Shane has been either unable to get a seat at the table or has been ineffective. Car parking keeps being added for staff (free, of course). Door-zone bike lanes around the schools are the norm and stay in place when there are road projects that should have had them rethought and removed. He has been unable to even get regular traffic law enforcement near the schools, so parents refuse to let their children walk or ride to them.

Shane made statements in the local paper about getting a majority of the students at one middle school to ride or walk to school. I didn’t believe him, so I went to the school and counted the bikes myself over a two-week period. Fewer than 5% of the students brought bikes, so unless there were a whole lot of invisible student pedestrians, his statements were untrue. I think what he did was hold a contest with prizes for walking and riding, counted the number of participants, and claimed that was his sustained amount of active transportation.

Look, he’s a nice guy. He smiles and cheer-leads. However, the fact is that he is part of the official “leadership” in cycling advocacy in a small city. The proof of the pudding is in the eating, and there’s no denying that the pudding that is Eugene’s cycling participation is absolutely rotten. How could that be honored with an award? Are we doing so poorly that down really does look like up? Perhaps so.

The battle against a car-culture is real and it’s hard enough when we fight it from those entrenched in the system. Having to battle those that one would think an ally in the struggle is both demoralizing and ineffective.

That there are people liking his comment make me wonder. You think he’s right? The problem is those who have committed our lives to the cause of getting more people biking because we haven’t been able to shift the dominate paradigm fast enough or in the right way?! Shall we give up then?! We can’t move the needle so we’re ineffective and have to step aside. Shall we let those who complain the loudest on blogs give it a try? Let’s see how that works.

“Shane is a big part of why Eugene has literally hemorrhaged cyclists over the past decade. We’ve lost 43% of our cyclists since 2009.”

It’s hard to believe that such a slanderous and defamatory comment is going virtually unquestioned on BikePortland. Attributing one’s perceived view of a shift in mode-share, or purely just the # of cyclists in a city, to an individual who’s been responsible for significant growth in resources and new funding to Safe Routes to School programming is both laughable and asinine.

But, if you peer through B. Carfree’s trolling comments on BikePortland and in other publications (Eugene’s Register Guard for example), you will see a history of a guy (or gal?) who’s got a massive chip on their shoulder and is bent on demeaning folks that are in the spotlight trying to make positive change in a complicated world.

It’s easy (and lazy) to strike out at one individual on a comment board when you’re not getting your way. Our transportation issues are layered and complex and people’s day-to-day choices in how they get around are culturally ingrained and greatly influenced by our built environment. Change will come, but it’s going to take dedication, hard work, and frankly – the economic cost of driving will have to increase to change the masses’ behavior.

Thanks Shane for all the work you’ve done, the community is a better place because of it.

Is it in fact correct that cycling to school has substantially declined in Eugene? What is the actual data, how was it collected, how do we know it is accurate?

Does Eugene, for example, survey school kids about how they got to school last week, or count bikes in the school racks?

Biking to school has not declined in any school from any counts I have done or seen.
Data collection often happens as part of an action plan and isn’t as consistent as Portland has currently as we don’t collect data in the same way.
It really depends on the school and the champions we have at those schools.
However, we have seen increases in walking and biking at schools where we have implemented at least some of our SRTS programs. Those schools where we implement more we see higher increases in active Transportation.
In the above mentioned comment I beleieve Brad (B Carfree) was talking about Roosevelt middle school and we did see a major increase there to 50% walk and bike (with the majority of that an increase in walking but still a doubling of biking).

Thank you Kate for the great article! This was the best Alice ever!