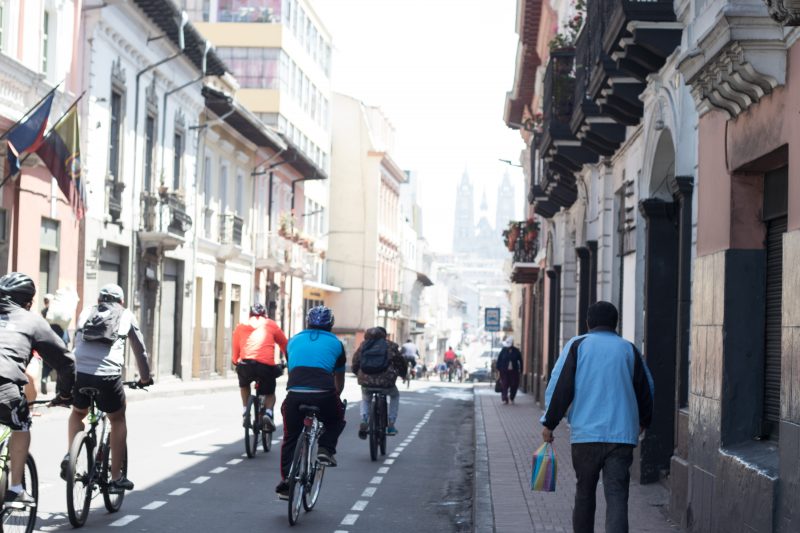 Ciclopaseo through Old Quito with Basílica del Voto Nacional in the background.

I had an interesting opportunity to visit Quito for a long weekend with my bike. I spent 6 weeks in Quito 10 years ago while finishing a motorcycle trip, so I was excited to go back and explore it from a bicycling point of view.

First, Quito has been running a Ciclovia event called Ciclopaseo since 2003. It’s now a weekly event using some of the largest roads through Quito.

Second, Quito has a long ways to go, but has some great bike lanes and other infrastructure. I noticed that there aren’t any lanes with just paint — they all have some sort of vertical delineator. The paving surface may be terrible, but it’s an actual protected bike lane.

Finally, Quito’s “old airport” has been closed in the past few years. It’s been a long time coming, and was necessary not only to move out of the city but also to get much longer runways. The old airport has been turned into a large park, Parque Bicentenario. There’s a long way to go with their plans for the park, but there’s some art between the runways and the runways themselves have been striped for those who want to exercise on foot or by wheel.

It’s heartening to see so many transit modes in Quito. Biking isn’t easy — the city is at 9200 feet — but it’s a fairly low-cost way of traversing the city. Plus, there’s an electric trolleybus line and a subway that is well under construction. Those are huge changes over the poorly-tuned turbo diesel buses.

I lived very close to that airport for 6 months, and close to the Parque Metripolitano. You know what else Quito has in spades, MOUNTAIN BIKING. In a city with wildlife, parks, and 2.5 million people. Its far more bike friendly (as in likely to not die in traffic), than Portland is. Awesome photos, I miss my time there.

I was in Quito in ’94- I liked it then and it looks like it is even better now! Thanks for the great, informative write-up!

I’m really enjoying all of these contributor posts!

Something I find interesting is that, even though I know those plastic wands wouldn’t do much to prevent a car from swerving into the bike lane, it still feels like a safer and more appealing bike lane (compared to paint-only) when I look at the photo.

I wear many hats
Reply to  Toadslick

No one wants to hit stuff, so when the wands are present it forces people driving to be vigilant every 5-10 feet, rather than intermittently when people are present. It definitely calms traffic.

I see these photos as a caution story of what we are likely to get, and in fact have been getting, if we don’t grow smarter. Substandardly narrow unmaintained channels with obstacles that can take down a cyclist but really provide only a visual impediment to motorists is no way to move cycling forward, imo.

Steve Scarich
Reply to  B. Carfree

You’re absolutely right. I have noticed that over here in Bend, that the City is re-paving streets like crazy. BUT, more often than not, they stop the new pavement at the bike lane line. It has gotten so bad, that there is now a 1 or 2″ berm at the edge of lane, added to the bumpier and bumpier bike lane pavement. And, when they do re-pave the bike lane, they do not raise the storm drain level, so now we have a 3-5″ sharp drop if you’re not paying attention. I even talked to the guy who ran the local bike advocacy blog a couple of years ago, and he said the City promised him they would stop doing this, but they lied to him.

One of the favorite things I did in Quito 7 years ago was mountain bike down from the 14,000 level of Cotapaxi. Highly recommended!

I wear many hats
Reply to  Greg

I managed to climb it. I would definitely go back and do more riding in Ecuador, its a fantastically warm culture, with a love of the environment, and a love of adventure. I didn’t here of any bike tours at the time I was there, but it would be worth it to do a tour down there ( MTB of course).

And after all that adventure high in the Andes, you can bus down to Banos de Ambato and soak in the hot baths under Tunguraua! (sp?), an active volcano.