As we predicted after last year’s inaugural edition, the Ladd’s 500 is back.

For the uninitiated, the event is a novel homage to one of Portland’s most beloved bike routes, neighborhoods and public spaces. Ladd Circle is a public park inside of a roundabout smack-dab in the middle of the historic Ladd’s Addition neighboorhood of inner southeast Portland. The idea behind the event — like many other events that make our local bike culture so interesting — is to simply have fun doing something silly on bikes with a bunch of other nice people.

With the 2017 edition coming this Saturday (4/15), we asked one of the event’s protagonists Eric Ivy to share more about it.

Here’s what he sent over: 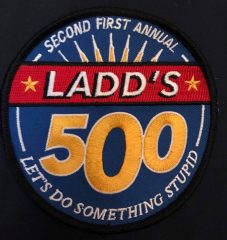 When explaining The Ladd’s 500 to friends or strangers who haven’t heard of it, I often start out by stating it’s the most fun I had last year, with exception to sky-diving in the Alvord Desert. And that’s because it’s true. What I love most about The Ladd’s—and I mean really love—is that it brings together like-minded people who want to do something truly stupid and have a very silly time on bikes. It takes a certain type of person who thinks that the Ladd’s is a fantastic idea, and these are my people. That being said, one simply cannot categorize “these people.” But let’s ignore that last statement for a minute, and I’ll attempt to put people in boxes by sharing that the first inaugural running brought out messengers, polo players, TNR’ers, unicyclists, fat-bikes, tall bikes, zoo-bomb minis, Schwinn Stingrays, clunkers, a keg bike, grill bikes, a father with an occasionally sleeping child on a longtail, fixies, a swing bike, and even some lycra!

Because of this way-too-Portland spectacle, the neighbors in the Ladd’s addition had little-to-no choice but to come outside, embrace the event, and enjoy the beautiful weather. Some grabbed lawn chairs and watched the festivities go down. Some youngsters saw the commercial opportunity and were selling snacks, and dolls, if I recall correctly. The Belligerantes generously grilled food for the hungry, before competing themselves, concurrently running laps together. (See new ‘Belligerantes Rule.’ Cheating is allowed if it’s funny)

For those who are still wondering what the Ladd’s 500 is, it is simply 500 laps around Ladd’s circle/roundabout. Based on some fuzzy math, (and debate about the diameter) it works out to about 100 miles, or a century, give or take. But remember, it’s not a race, it’s a relay. Teams must switch riders at least 10 times, or following the Nathan Jones rule, switch bikes 10 times.

Though it’s not a race, the fact that there are humans and wheels are involved means that times were kept and there is an unofficial record list:

Because this event happens in a residential area, Eric and event creator David Barstow Robinson want to make sure everyone reads the rules before showing up.

For more info check out the event on the BP Calendar or on Facebook.

It should probably be noted there will be a neighborhood easter egg hunt in the center circle that morning.

Thanks for the heads-up Shetha! Luckily there’s plenty of room for everyone in the circle!

BTW Jeff, there were no problems with traffic merging last year, or pedestrians crossing for that matter. It turns out roundabouts were very cleverly designed! PS – I’d love to see more slow riders there! Can you go slower than a unicycle?

I don’t have any immediate access to Facebook so I can’t tell the timing of the event. The egg hunt traditionally meets at Abernethy Elementary at 11 AM. A group of adults gathers all the brought eggs and hides them in the center circle. Then when they are finished, all the kids hike to the edge of the circle… ages 2-5 are allowed a head start, and then all kids are let loose. With the weather forecast being so nice I suspect it will be a well-attended event (it’s been happening for AT LEAST the last 12 years, rain or shine). Maybe the bike event participants want to help hide eggs? I have made the nextdoor list aware of the bike event.

I joined nextdoor to try and connect with the organizers of the egg hunt, but apparently it treats Ladd’s Addition as distinct from Hosford Abernathy (boo!)- so I’m not able to find anything. Relayists will begin lapping at 10:00, and we are excited to hear that the park will be doubly lively for a spell. Please reach out with any questions or concerns- and when the Hiding Committee heads to the park, have them find the idiot with a megaphone to coordinate. See you at the circle!

Sounds like a great way to piss people off. Said another way. I might just show up and interfere on my bike, slowing down other riders… Lolz.

Jeff is right, fun sucks! Trolling is awesome! Facebook is a bad way to publicize events!

Chris I
Reply to  Hello, Kitty

I typically use carrier pigeons.

“Lolz” Sure Jeff, I bet that will result in all sort of people laughing out loud. Z.

Is it wrong to presume a permit was taken out?

Permits are not needed to enjoy our city parks, or to ride a bicycle on the street.

I think what he’s saying is wouldn’t it be nice if the event weren’t supplemented with random cars and TriMet buses rolling through?

TriMet doesn’t use Ladd’s on the weekend. Traffic proved not to be a problem last year.

PP,
Oh contraire, any event that uses the public right of way requires a permit. this is not just ‘riding a bike’ or ‘enjoying a park’.

I see no clear line between an organized event and “Hey Facedork friends, let’s go on a bike ride around Ladd Circle”. Sure there are clear cases that are obviously one or the other, but there are plenty of muddy cases as well.

Of course you don’t. Not like you have a vested interest. I am sure Ladd’s addition folks really love this event.

I don’t. I am philosophically predisposed towards no permit, but I really have no stake in the event.

…nothing adds fun like government red tape does. As long as the neighborhood doesn’t feel unhappily overwhelmed by its presence, I don’t see any problem with a once a year, casually organized event like this one. Avoid any indication of conspicuous corporate sponsorship, and the event will likely go uneventfully on its nutty way to the general well being of all.

The guys who did 200 laps on a unicycle last year sustained permanent injuries/disfigurement. They will be returning this year, but on mobility scooters.

Thanks for the fake news…not.

Putin, is that you?

These types of injuries are no laughing matter

We loved the Ladd 500 last year! My kids were the entrepreneurial ones – selling cookies, cold laCroix and fairy beds (handmade by the 6 yo no less) – they have been hoping this would come back! I wanted to write here thought to help make sure that the organizers understand how beloved the annual neighborhood easter egg hunt is and make space and room for all the littles and families to create this memory… As mentioned above, everyone meets at Abernethy Elementary School then adults race over to circle and put out eggs – then a parade of neighborhood families walk down the middle of the street from abernethy to the circle where a large group of them wait in the street while the little kids cross and get a head start. Then the rest join and eggs are hunted until they are all found. Maybe there is some way for the bikers to sit out an “easter lap” or two while the street parade of kids happens? I know last years naked tall bike rider would be quite the easter scandal! 🙂

Team Fun Sucks 🙂 aka dark knights . love the awesomeness of this event!

Will someone be setting a new world record on a Biketown bike this year?

paikiala
PP,
Oh contraire, any event that uses the public right of way requires a permit. this is not just ‘riding a bike’ or ‘enjoying a park’.
https://www.portlandoregon.gov/transportation/?c=29979
Recommended 0

Good point. We hereby decree every Pedalpalooza event from here on out needs to take out a $25 permit for permission to use public space in the way it was intended.

paikiala
PP,
Oh contraire, any event that uses the public right of way requires a permit. this is not just ‘riding a bike’ or ‘enjoying a park’.
https://www.portlandoregon.gov/transportation/?c=29979
Recommended 0

Why not just start the race at noon? It would be a very considerate gesture to the families of the neighborhood with whom you’re sharing the park and streets. I’m sure it would be greatly appreciated.

Either the 500 laps isn’t really 160km, or the team that is purported to have accomplished this feat all have the combined talent of Sean Kelly !
I’m gonna call that b.s, out. It would seem ridiculous considering the event and how it is structured. 30.76 mph could not possibly be maintained under the conditions surrounding the course. I’ve done hundreds of time trials, and am only above average at best. Not buying it.

In fact I’ll ad, that the time stated would be greater than Merckx’s hour record for BOTH riders in the event. Horse sh*t.

Very few take the temporal vortex created by the spinning in circles into account. I’m not surprised you fell for that. Classic blunder.

It’s very similar to the science from the film Hot Tub Time Machine, I’m not surprised you don’t understand.

Yeah… I made that blunder shortly after starting a land war in Asia.

I was curious about this and took very imprecise measurements by asking Google how to find my way halfway around the circle. The distance all the way around ended up being about 840-ish feet, making 500 laps closer to 80 miles. Even at “only” 80 miles, some of the reported times are pretty impressive, requiring an average speed of almost 25 mph. I can only assume a multiple-person team benefits from significant rest in between periods of riding.

We won with a two person team this year. We rode the outside edge as far out as parked cars allowed, trying to make for the longest possible distance.
I believe we averaged 27.2 seconds a lap, I on a track bike and Maty on a road bike.

The measurement of the inside edge is like 80 miles.
The outer loops are much more.
it is a very wide circle.

Hi everybody! I just happened to walk by Ladd’s Circle today and saw this event. Looks like boatloads of fun! I had to run home and get my camera. Here are some of my pictures:
http://s102071551.onlinehome.us/2018-Ladds-500/
Thanks to all who put on the show!
PS. How did the Easter Egg Hunt go for the little ones?