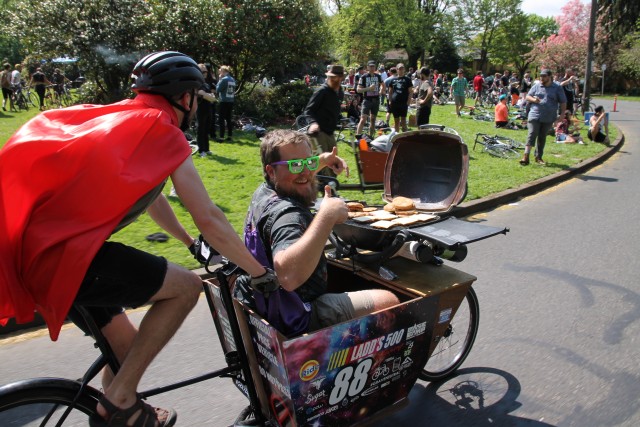 The Ladd’s 500 went off without a hitch on Saturday. And given the reactions we’ve seen so far, it appears the organizers have hatched a grand new Portland tradition.


For the uninitiated, Ladd Circle is a small traffic circle in the middle of the Ladd’s Addition neighborhood of inner southeast Portland. It sits along a very popular bike route and the inside of the circle is a city park. In the spirit of events like Zoobomb, Pedalpalooza, and the Thursday Night Ride, organizers of the Ladd’s 500 just wanted to have fun on their bikes in a creative, fun, and respectful way. Imagine a bunch of fun-loving people pedaling around the circle on all types of crazy bikes while a big group picnic and BBQ went on in the infield. It was like the Portland bike scene’s version of the Indy 500, complete with cheering fans, a pit lane, teams, and even a leaderboard to keep track of the lap counts.

Josh Roppo was there most of the day taking photos and hanging out. He said the event drew a diverse group of onlookers and participants. “Some riders really wanted to win, some just have fun, but by the end everyone wanted to finish!”

500 laps is roughly 75 miles so it wasn’t easy to finish — especially if you were like the team on the cargo bike that was grilling cheeseburgers while they went around.

There was some concern before the event about how the neighbors would respond (it’s a quiet residential area that has complained loudly about stop-sign running over the years). But Roppo said everything went smoothly. “The neighbors seemed really friendly,” he said. “Traffic really wasn’t a problem either. One nearby family came out and kids sold soda on the sidewalk.” Organizers made it clear that it wasn’t a race (it was a relay) and among the rules were: “Try not to fuck with cars. This is not a closed course, share the right of way,” and “Absolutely don’t fuck with pedestrians. Hitting a ped will result in a DQ.”

Here are a few more of Roppo’s photos: 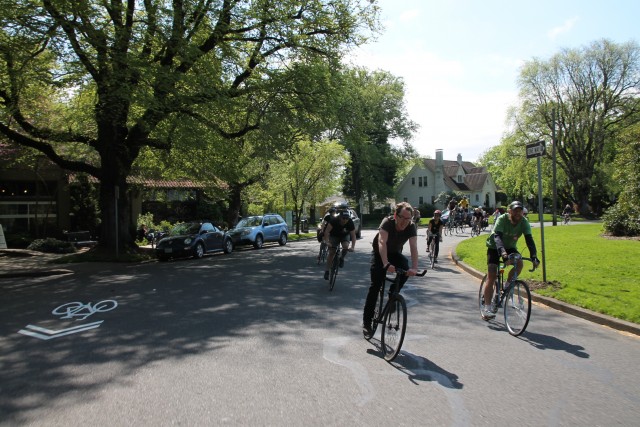 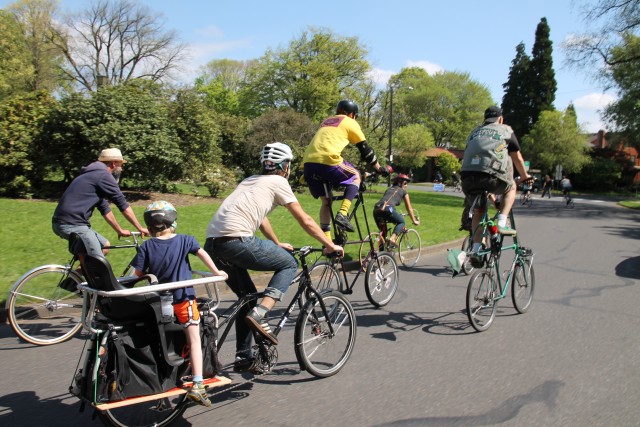 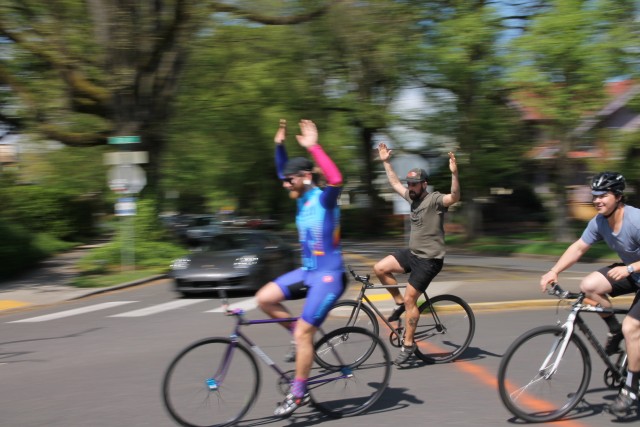 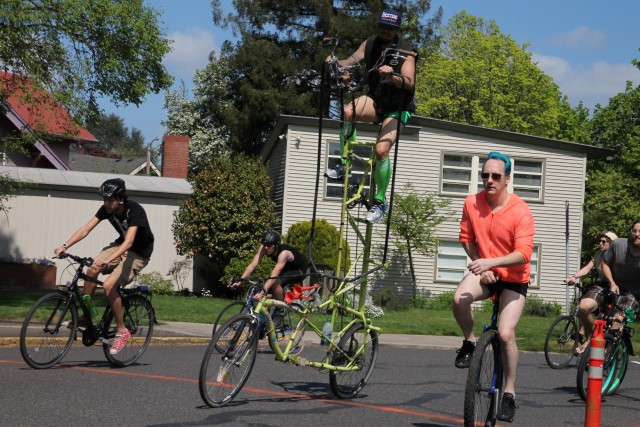 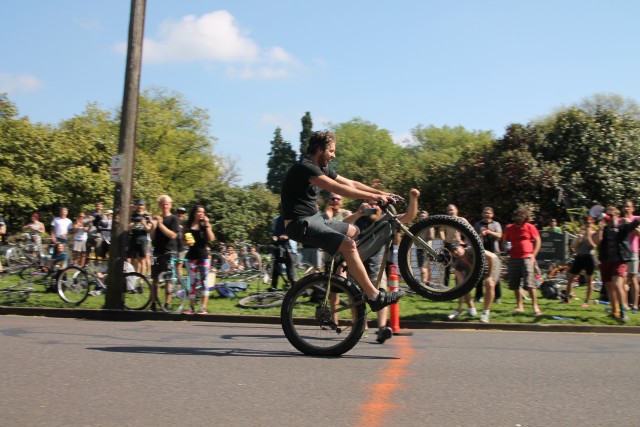 Solo winner Nathan Jones crossing the finish line after 500 laps (he switched between a fixie and a fat bike). 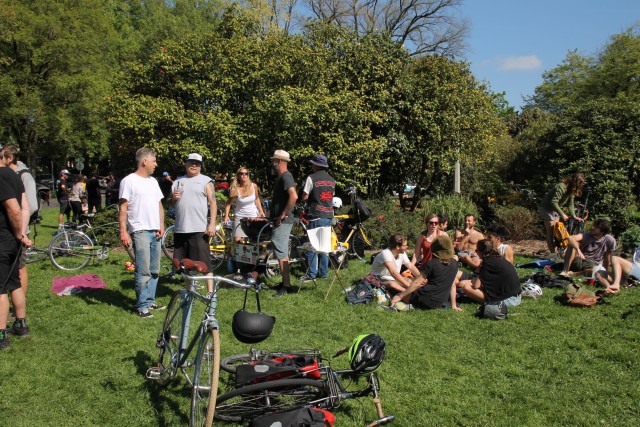 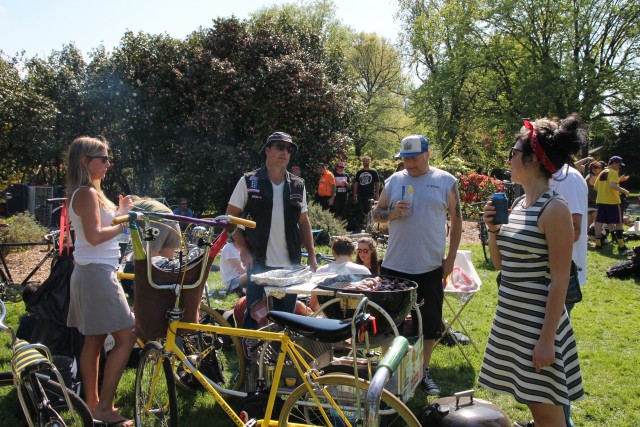 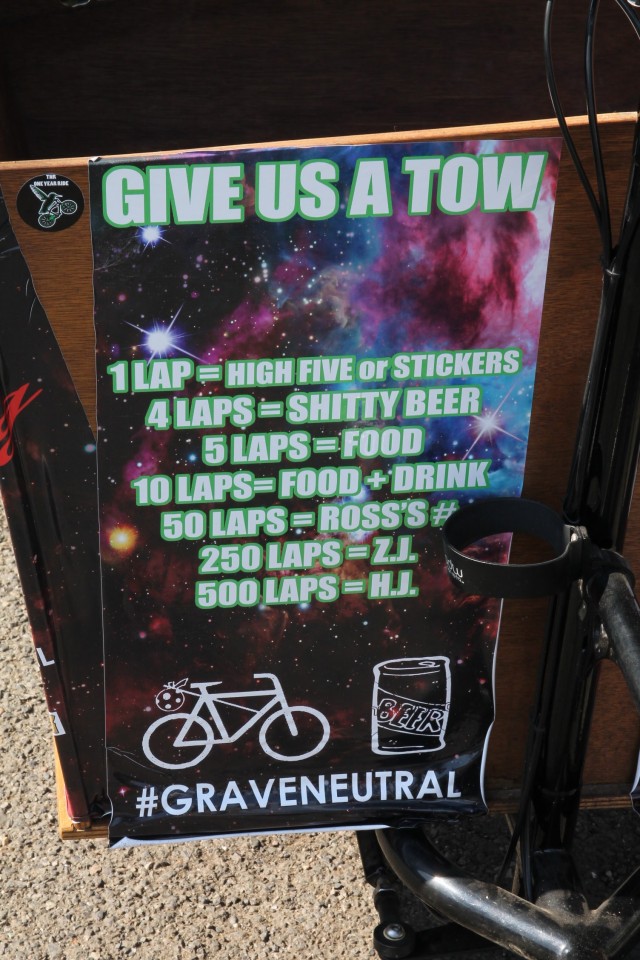 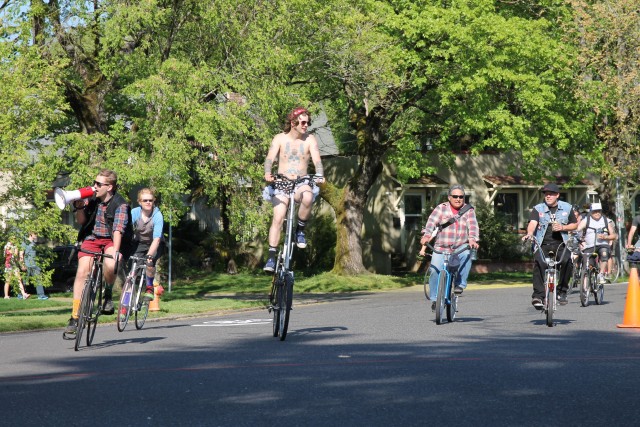 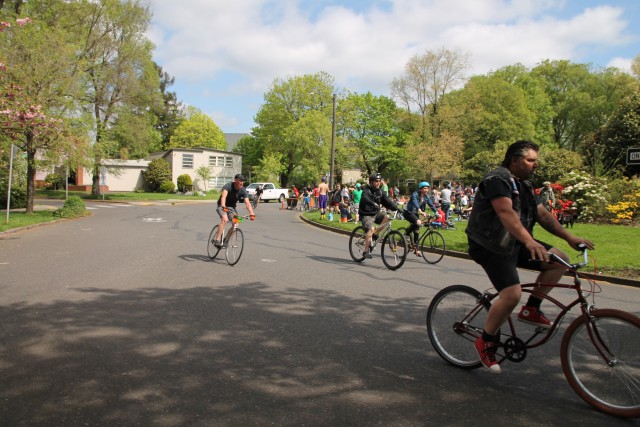 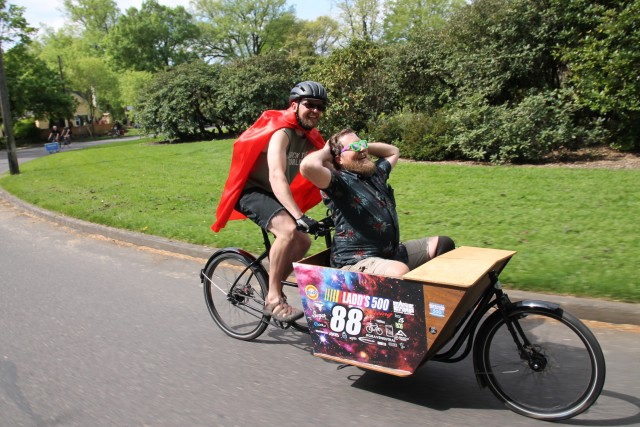 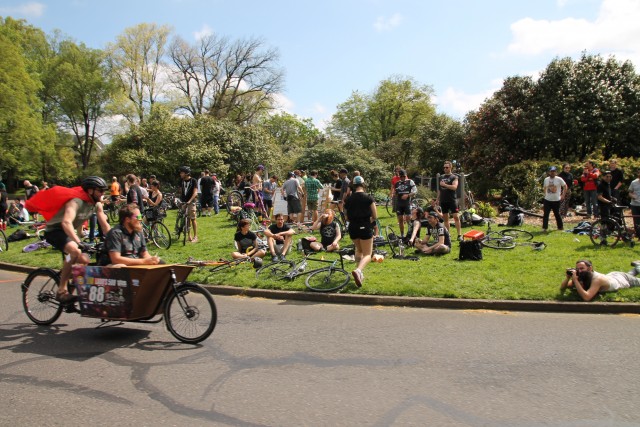 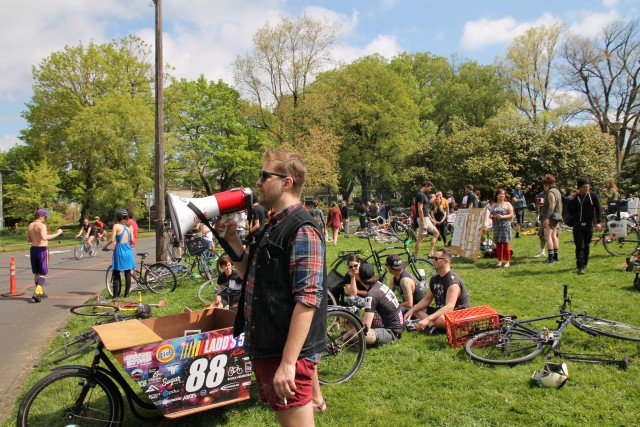 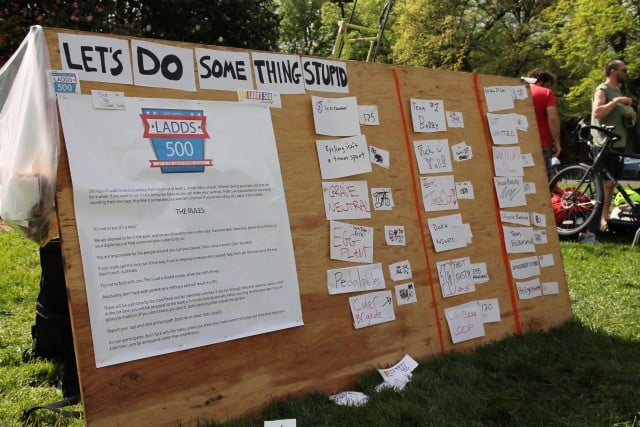 For more coverage check out the posts on the event’s Facebook page and read this writeup from Aixe Djelal on Medium.

As a Hosford-Abernethy resident, I’ve had some trouble getting city staff to recognize that Ladd’s Circle is the neighborhood’s only real park (between the river and SE 27th). It really makes a difference when it comes to things like choosing bike share stations and determining density. Thank you to everyone who made the park come alive and highlight the importance and potential it has for the neighborhood!

It’s east of SE 27th, right on the edge of the neighborhood boundary line.

I thought 29th was the border line?

Fine, if you’re going to split hairs, it’s ROUGHLY on the neighborhood boundary line. A whole two blocks away.

It is a nice park though. 🙂

This kind of repetitive idiocy is exactly my kind of thing & I cannot believe I missed it.

How the heck do they keep track of laps?

Someone sitting in the circle counted for them.

“Riders are responsible for accurately counting their own laps”, but teammates are pretty helpful in this regard.

Satellites and drones, I think.

I had a great time just being there, though I did do ten laps just out of fun. I wanted to be there not only socially, but to watch how the traffic dealt with this mobile party.

Conflicts were minimal, traffic flowed, and I see NO reason why the city can not set up yield signs tomorrow and make this a true round-about. If there is ever another bike sting here again, the Portland Police Department should be audited for miss-appropriation of funds.

We need more bike cultural events like this one.

That looked like it was tons of fun! I’ll have to watch for it next year.

The unicycling team had to drop at lap 200 due to several perineal injuries. They are currently convalescing in traction, and are heavily sedated. Recovery will be slow and painful. Please send them beer and nachos.

I know I was openly skeptical about this event being a good idea when it was first discussed here, but I’m glad to see that I was wrong about that. Looks like it was a pretty great time all around!

Great idea! How about an event at PIR each summer? That might be the closest thing we’ll have to a Tour de France type of event. With the Vanport / PIR Max station right next door, it would be an easy event for the public to attend. Make it a Rose Festival event. And it would be much quieter than the races and drags with cars that are usually held there! And so Portlandia-esque!

Already have weekly bike races at PIR on both Monday and Tuesday nights.

Made me smile…very BikeSummer/ Pedal Palooza esque…and happy that the cheese burger cook on the cargo bike did not do a face plant on the grill during an emergency stop.

Has anyone done a health and safety check on the griller and cargo bike captain…to make sure they were not mauled by packs of dogs or drunk hipsters thinking they were 200 lbs walking treats due to the burger scent?

I’m happy to report Eric Ivy the Chef didn’t get mauled last night on the way home, at least according to Facebook.

Some of his burgers looked a little sad, but I imagine it must have been difficult to get a good flip going whilst in motion.

I did see on the event’s Facebook page that the keg bike was out and there was a tragic incident where a solo cup went down on the course…. but everyone did a good job picking up after themselves and no trash was left behind.

This is great- SO bummed I missed it!! Reminds me of Merritt’s great short film in Ladd, ‘Circle Century’, which was something like 667 laps.. I so hope he was there this weekend, he lives very close! Take a peek: https://www.youtube.com/watch?v=akvlF5Xbwkc

We walked through Ladd’s just to check this out. Looks like a fun event, and I hope it continues for years. It may be a good idea to limit the total number of teams, though. If this grows significantly larger, it could create some issues with traffic.

Angel
Reply to  Chris I

See what happens when you let those zoobomb cretins out during daylight hours??!!! All kinds of weird ass fun hanging dong in public.
Limiting teams is definitely a good idea. Maybe make it an invite event? Like you win other things or build a cooler bike thing.

I was the griller in the Metrofiets. No emergency-stop-face-plants. No mauling by dogs, just hungry competitors. 99% chance this will be the most fun thing I did in 2016. Kind of depressing outlook on the rest of the year. Thanks for the coverage BikePortland!!

And thanks for the pictures Josh!

I had a blast riding a few laps for Team Babby until my Big Dummy got a flat. So much fun and I hope I can do this again!

1. I CAN’T BELIEVE I MISSED IT!!
2. The pessimist in me is worried that the neighbors will complain to the City and the event will never happen again.

I have thought for years that this would be a great place to do the Fat Cyclist’s 100 Miles of Nowhere ride, but have never had time to actually do it, glad to see some bike silliness taking place in this great location, albeit without me.

After hearing the initial announcement that began with the line “Let’s do something stupid”, I decided to make that my family’s official motto. We now have a dirt track with jumps and a teeter-totter ramp in the side yard for me and the youngins. Much stoopid fun is being had by all. We all need to be doing moar dumm things.