There’s something fishy going on with roofing nails in the bike lanes of north Portland — particularly along the Interstate Avenue corridor. 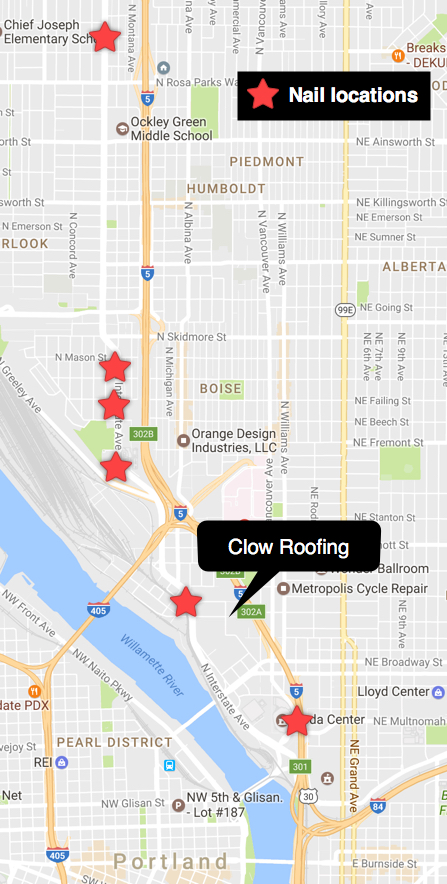 We don’t want to jump to conclusions here. The nails could very well be falling off trucks. Clow Roofing and Siding Company is located just one block off of Interstate on Tillamook — which means their trucks likely travel the same road where most of these nail reports have been made. As you can see in the map we’ve made, all the reports we’ve gotten so far — except for one — are from Interstate Avenue.

Is this all the result of nails accidentally falling off trucks? Or is someone deliberately messing with bicycle riders? Is it both? Without a full investigation — or someone being caught red-handed — it’s impossible to know.

I called Clow Roofing today to tell them about the issue and ask a few questions. The person I spoke with said they only have one flatbed truck that has exterior equipment boxes (all their other trucks are fully-enclosed pickups). The Clow employee also said they usually only use nails in a coil that would go into a nail gun. She hadn’t heard of any reports of nails falling off trucks but said she’d tell the manager about the issue just in case.

Here are some snippets from emails and Tweets we’ve received:

“Today is day 2 of nails in the northbound N Interstate bike lane. I came across 2 patches yesterday morning and picked up one in front of the Kaiser campus. This morning, I came across 2 fresh patches, one on the hill leading up to the Kaiser campus and another in front of the campus but further north than yesterday. These 2 patches weren’t there yesterday morning. It is interesting that in each patch, it is about a handful of nails and is mostly located in the bike lane with only a few nails out in the traffic lane. Not sure if this is an accident or intentional, but I thought I would put it out there.”

“I first picked up nails on Interstate Ave on Monday the 6th [of March]. They were between the Greely light and the top of the hill, north bound. The second pile was in front of the Alibi. A coworker had told me about them when he saw them on a lunch ride. He picked up another pile in front of Broder Norde on Wednesday the 8th, again at lunch time. Hope this helps.”

“I picked up the pile of roofing nails on the left today in the northbound N. Interstate bike lane between N Thunderbird and N Tillamook. The pile in the container on the right I picked up at the SW corner of the intersection of N Tillamook and N Interstate about a month ago, just after the big snow storm. I’m not sure anyone is deliberately targeting cyclists here, although that is one possible explanation.”

“I had a concerning incident, and I wasn’t sure if you’d heard of anything similar. I was biking south on Interstate Avenue just before the Max crossing on Bryant St. My back tire abruptly stopped and I had to put both my feet down. I got off the bike and looked at the tire. A piece of wood, which looked like lath, was stuck up under the rain flap. I pulled it off the tire. There were small nails sticking from the wood. Needless to say, my tire quickly went flat. I have a picture of the wood. I don’t know if it was an accident or purposeful, but it seems suspicious that it was in the middle of the bike lane with nails sticking up. Hopefully no one else has had a similar episode, but I thought I should make others aware of the potential.”

Accidental or not, we’d love to get to the bottom of this.

For historical reference, you might recall that in 2011 someone threw tacks in the bike lanes of N Vancouver and Williams. The incident seemed so deliberate that a man offered $500 for information leading to an arrest. In 2015 a tack incident on the Hawthorne Bridge got so bad that Multnomah County had to use a magnetic sweeper to pick them up.

If you come across nails in the bike lane, or if you’ve seen anything suspicious, please let us know. And be careful while riding in this area.

If this is intentional, the perpetrator isn’t terribly competent. Roofing nails are made in much shorter lengths than those shown, which would cause them to be much more likely to successfully penetrate a bike tire.

I do seem to recall that the military commissions act, aka PATRIOT 2, made interfering with transportation an act of terrorism. Of course bike transportation was not what they had in mind, but it would be an interesting use of a vile law.

K'Tesh
Reply to  B. Carfree

Don’t give haters any ideas.

Patrick
Reply to  B. Carfree

My thought exactly, there are more effective nails for producing flats (shorter or with a large washer head). I also see that the nails are all the same. My guess it is intentional and by someone who is too lazy to both leave their vehicle or buy other nails that they didn’t already have.

Chris I
Reply to  B. Carfree

Exactly. This is actually a bigger risk for car tires. It’s very unlikely that any of these would flat a bike tire. Lathe with nails on the other hand… ya, don’t run over pieces of lathe in the bike lane, unless you want a flat tire.

lop
Reply to  B. Carfree

>I do seem to recall that the military commissions act, aka PATRIOT 2, made interfering with transportation an act of terrorism.

Let’s not take that route please.

People dump so much stuff when driving or leave items loosely-attached to trucks and vans.

I spotted these same nails on the shoulder of 43 on the hill just north of Lake O.

If it’s deliberate, I hope that the perpetrator gets caught quick, and is swiftly brought to justice.

Ride Safe Out There Folks!

Someone ought to nail that bast*rd!

During last years WNBR, there were construction staples thrown down (or very coincidentally and accidentally dropped) along the route; I recall SE Woodstock was one of these places.

A fair portion of this bike route is used by houseless folks bringing ad-hock building supplies to the encampment on Greely. Could have slipped through the cracks on a shopping cart being pushed up the bike path.

This seems a likely explanation. Perhaps someone could pay a visit to the camp and help them rig up something that will keep them from dropping nails. Perhaps someone has an old tupperware container that would keep all the nails from falling out of a flimsy box?

yawn. Call me when bike lanes are littered with piles of kittens.

Roofing Co. is right, this has nothing to do with them, they use all strips. This looks very intentional.

I’d venture a guess that this is a two-person operation, you need to be leaning out the passenger window to get these nails into the bike lane.

I very much doubt the homeless have anything to do with this; they ride bikes too, and I don’t expect they relish flats any more than the rest of us do.

Finally, FWIW, PBOT did clean the northbound side of N Interstate between N Thunderbird Way and N Tillamook and maybe beyond overnight.

That last one sounds like a stray bit of carpet tack strip. Likely accidental.

I rode up Interstate from Rose Quarter to Overlook Blvd. I saw a couple nails left behind, but it looks like the bulk of them in that section have been cleaned up.

As has already been mentioned, this is an expensive and ineffective method for inconveniencing cyclists. I doubt these nails were dropped on purpose.

In the highly unlikely case this is intentional, we’re dealing with a seriously low watt bulb.

Autumn 2016, I picked up hundreds of these same nails in clackamas county. Usually appeared weekend mornings. Pattern shows deliberate handfuls tossed in bike lanes. After a little more than a month they stopped when winter set in. They are not accidentally falling off of trucks.

I encountered a large handful of them on N Interstate on Monday. It seemed to me too restricted to the bike lane to be a random spill. I rode through them before I could get stopped and as I picked them up, I thought the same – that a shorter tack would have been more effective if their intentions were what I suspected. I’m happy with the ignorance. Oh, and a co-worker at Kaiser ended up with a flat (car tire) from a nail that looked exactly like those.

I agree that they are likely not randomly falling off a truck. They are in patches with about a handful of nails in each patch. And they are (mostly) restricted to the bike lane. If it was an accident, it would be more random in the amount of nails and where they land. I agree, though, that they are too long to be a real threat to a bike tire which makes the whole situation baffling. Though even if this is an accident, it isn’t safe and something should be done about it.

Also, this morning riding up Interstate there was a fresh patch in the northbound bike lane on the hill leading up to the Kaiser campus. I stopped and picked them up, which is the fourth patch of nails I have picked up this week. Since 2 of the patches were in front of the Kaiser buildings, I talked to security at Kaiser who took the nails and is now aware of the situation if they weren’t before.

Another report of nails from Nextdoor Neighbor:

“My husband noticed a bunch of nails in the road at the intersection of NE 31st and Knott this morning. He picked up as many as he could see (they were spread out through the intersection and in the corners).”

Found a handful of the same nails this morning again on northbound Interstate just past the Broadway Bridge.

Did you pick them up? if yes, they came back! I picked them up & took a pick of them in my hand.