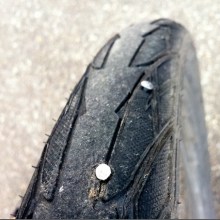 This tire and many others were
flatted last week due to two separate
tack incidents on the popular
Vancouver/Williams bikeways.
(Photo: @seniortrio/Twitter)

A Portland resident concerned about the recent incidents of tacks being thrown into bikeways on N Williams and Vancouver Avenues, has announced a $500 reward for information that leads to the arrest and conviction of the person responsible.

Mark Allyn, who works at Intel in Hillsboro and rides his bike each day from Southeast Portland, has retained local lawyer Ray Thomas of downtown Portland-based Swanson, Thomas and Coon to handle all the inquiries and to answer any questions about the reward.

Here’s a snip from an email Allyn just sent out: 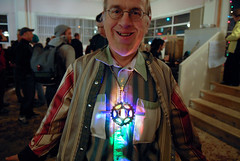 “I am offering a $500.00 reward to the person who furnishes the Portland Police Bureau with information that results in the arrest and conviction of the person or persons who have distributed tacks and nails on the bicycle lanes of N. Williams and N. Vancouver Avenues during the early part of September; actions that resulted in unsafe riding conditions for the many bicyclists who commute using that area”

I first reported that small tacks were causing flats on N Vancouver Avenue back on Friday, September 16th. Then I reported several flats from the same type of tacks on N. Williams Ave several days later.

So far I have been contacted by 21 people who have gotten one or more flats from tacks on these two streets.

“I am doing this,” reads the email from Allyn, “in support for our community of cyclists (and wheelchair users who can also get flats) who use that high non-motorized traffic route in the city.”

Thanks Allyn! What about an account where we could increase the reward through small donations fromt the community? I could throw in a few bucks.

Good idea Ron! I’d contribute to that as well.

Does anyone know what cross streets on Williams and Vancouver these incidents occurred at?

Get them to all file police reports. It won’t take long and will have a much larger impact.

Arrest AND Conviction? Nice thought but I doubt the idea of getting a few hundred dollars four years from now will get anyone to rat out his or her friend. I hope I am wrong.

Thanks for the daily dose of misplaced cynicsim. A case of criminal mischief like this would not take four years to resolve, more like six months after an arrest. I also encourage anyone who suffered damage to file a police report. There are several degrees of criminal mischief, with the severity of punishment increasing in accordance with the amount of damage caused.

Great gesture Mark! I too, would be interested in contributing to the reward fund.

Keep in mind that in order to charge someone with one or more of these instances, you will need a named person/people who are victims. Hopefully some of those people will also be willing to step forward and participate in prosecution if a suspect is found.

information sufficient to arrest and convict can only come from someone who actually saw the perpetrator doing it (very unlikely) or who heard him boast of it, which might not be enough to convict, and would require someone to snitch on a “friend” for only five hundred dollars (again, unlikely). so the reward offer is largely symbolic, at least at the five hundred level.

Awesome. The neighborhood thanks Mark.

Find out where you can buy exact same tacks. Ask for video of recent purchaser from store. Arrest him or her.

You watch to much crime drama.

Nice Job Mark! I hope the perpetrator gets caught soon!

Which law is being broken? What is the OR citation number?

I would think, in addition to reckless endangerment, this includes an element of intent to do damage to property.

(a) Damages or destroys property of another:

[…other “or” conditions skipped…]

(F) By intentionally interfering with, obstructing or adulterating in any manner the service of a […] PUBLIC TRANSPORTATION FACILITY …

There might be something more grave relating to intent to cause harm to persons.

Also, “Criminal mischief in the first degree is a Class C felony”. It’s punishable by up to 5 years in prison and fines of $125,000, according to http://www.myoregondefenselawyer.com/criminal-charges/criminal-mischief/

I don’t think you could make a case for reckless endangerment, when you had 21 people hit the tacks and get flat, but no one was injured. I think criminal mischief is a more likely charge:

164.345 Criminal mischief in the third degree. (1) A person commits the crime of criminal mischief in the third degree if, with intent to cause substantial inconvenience to the owner or to another person, and having no right to do so nor reasonable ground to believe that the person has such right, the person tampers or interferes with property of another.

@JRB, did yo see my ref to criminal mischief directly above, specifically as it relates to transportation facilities.

jeez, what a coincidence, in the williams/vancouver corridor? ha!

WHOOOOAAA ,WHOOOOAAA there Mr. jimbo!!
is that some kinda slant directed at the demograghic of the neigborhood? not nice.
Besides, I am sure it was the guys at Metropolis Bikes!! Now where is my reward, please.

no as sad as it sounds my first thought was all the tension surrounding that area lately. I hope that’s not the case but I would not be surprised if it was an angry resident of the area.

Over the past few years, what with the teen girls attacking folks,tacks in the road, residents and retailers fussing and planning issues still in progress, it seems it may be a while till things mellow. Perhaps the best way to deal with the tack vandal is to just plain ignore them,if in fact it is deliberate.

I’d be even less surprised if it’s some troll-gone-wild from outside the neighborhood who’s found his cause célèbre–his freddurstian outlet.

Great job Mark ! Back when I was working, I used that route regularly… Now I’d be tempted “to take the lane” due to the hazards in the bike lane… Wonder if anyone is doing that?
hmm

Hi Craig: I had only seen your post regarding reckless endangerment. It seems that we were posting regarding criminal mischief roughly simultaneously. I didn’t copy and paste the entire criminal mischief statute, but if you read it you will find that puboic transportation facilities are defined and do not include roads, but things like railroad infrastructure. Doesn’t matter though. It’s sufficient to make out a criminal mischief charge that whoever did the deed intended to spread tacks out on the bike path and that, as a result, peoples’ property was damaged. I’m not a prosecutor, but this is not a tough case to make legally. Getting sufficient evidence to convict the culprit or culprits, much more so.

Yea, I will contribute a few bucks. Imagine if every cyclist threw in $4. We would have so much money thet person’s own mother would bust the perpetrator and use the money for an extended Hawaii vacation. I would if it was my kid !!!