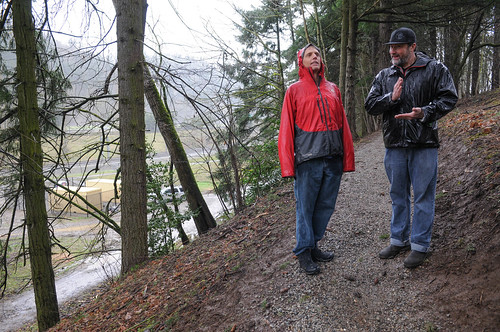 The bike trails at Gateway Green aren’t even ready for the public yet; but they’re already attracting major attention.

On Monday Dave Wiens, the newly hired executive director of the International Mountain Bicycling Association (IMBA), visited the park along with several other staffers from his organizations. Wiens and two senior planners from IMBA’s Trail Solutions crew were en route to Bend for the Sustainable Trails Conference. They spent a few hours in the rain with volunteers and city staff who are working on the Gateway Green project. They heard about the project’s background and challenges, and exchanged ideas about how lessons from other areas could be applied in Portland.

Wiens soaked up the information and seemed genuinely impressed with the progress so far. “It’s such an exciting project,” he said. “This is the type of project we could use an as example all over the country.” Wiens sees neighborhood bike parks like the 25-acre Gateway Green as a key to the future because of their potential to get more kids on bikes. After I shared a bit of background about how Gateway Green might influence trail access debates around Forest Park, he said, “Let the kids talk.” In his mind, these bike parks can help build a new constituency that will change the face of off-road cycling and offer a fresh — and more politically persuasive — perspective on access debates.

Asked what he thought of the trails at Gateway Green, Wiens — a resident of a small town in Colorado and respected mountain-bike racer who retired from competition in 2004 — said if he lived in Portland he’d definitely ride to the new park, “Do a couple of hot laps” and then ride home.

IMBA’s fingerprints are all over Gateway Green. They helped put together the original concept plan in 2007 and now their builders are making the trails. Locally based trail builder Jason Wells walked through some of the new singletrack with Wiens, pointing out how he carved a swooping line through what was once a tangle of ivy, brush, and a makeshift tent-camp.

The transformation of Gateway Green is testament to the work of IMBA, the City of Portland Parks & Recreation Bureau, nonprofit groups Friends of Gateway Green and the Northwest Trail Alliance, and others. The project is part of a national — and international — movement that’s bringing off-road trail riding to urban areas. I asked the Trail Solutions crew for other parks similar to Gateway Green. They mentioned the Sihl City Bike Park in Zurich, Switzerland; the Belle Isle Skills Park in Richmond, Virginia; and Wakefield Park in Fairfax County, Virginia.

As we approach the grand opening of Gateway Green on June 24th, the impact this park is likely to have on our region is coming into focus. Beyond the benefits for the Gateway District and everyone who visits the park, Gateway Green also represents a major step forward for cycling advocacy. Similar to how Vision Zero has helped coalesce a wide swath of interest groups to build political urgency for safer streets, Gateway Green could do something similar as an organizing principle for off-road cycling in the region. IMBA’s Vice President of Trail Solutions James Clark said on Monday that a project in Santa Cruz, California that brought together off-road advocates, land managers, and other trail user groups (even horse riders!), has had a major impact on the access discussion in that area.

“The mountain biking community is bringing all these people together and that’s the key to it all,” Clark said. “Showing that leadership is what gains you the credibility and that’s what allows you to get more access to different areas.”

With a draft of the City of Portland’s Off Road Cycling Master Plan due this spring (and a series of just-announced open houses starting next month), local off-road advocates should take Clark’s words to heart.

Uh, you have an epic typo in there around “tent-camp”. But from how that area was before, it is not that far off.

fixed it. Thanks Craig.

What is the best way to access this cool park without walking across I-205?

I-205 MUP from either Gateway or Maywood, but remember that it’s not officially open yet.

If you drive there … Park in the Gateway shopping center/transit center and then ride north on I-205.

Thank you all for the info though I plan to avoid biking on I-205 north. *wink*

Folks, if you like the kind of action you see here, consider supporting IMBA/NWTA by becoming a member.

Will the fence be around the park after it opens?

I’m not sure about that Jason. This is a new type of facility for City of Portland so they’re learning as they go. What I do know is that NW Trail Alliance and City Parks are currently hammering out a maintenance agreement… I’m sure the fence issue will be answered at that time. Stay tuned.

That sure looks like permanent fencing – it’s too ‘finished’ and solidly built to be temporary construction fencing.

“Let the kids talk” really captures what needs to happen, imo. More accessible cycling of all types for kids of all ages and some PR using those kids to create political pressure for ever more good things for all.

Holy moly. Jason Wells was a roommate of mine years ago in Bend. Random. Hi Jason!

Only have seen pics of GG. Hadn’t realized from them that there is some nice elevation included in the terrain, as the top picture shows.

Rode past Gateway Green this weekend, and it looks like it will be a nice facility for mountain biking. Too bad about the I-205 trail though, it is literally trashed from at least the Springwater to Marine Drive. I had the pleasure of riding past someone with a needle in their ankle as I approached Burnside, then got to skirt a few shopping carts filled with junk – perhaps this is “urban single track”? I used to ride this trail a lot more, and these developments have happened over the past year and half.. Hales’ camping code legacy?

Oh I just feel so bad for you that you had to cycle past people who are hitting their rock bottom and no one is helping them out.
Instead we get people like you just passing by, sticking your nose up in the air and complaining.
Do something positive about it rather than complain and do nothing.

Hey Jonathan, were you able to glean anything about his opinions on opening up cycling access on the pct and in wilderness areas where appropriate. Huge amount of trail mileage is at risk right now in oregon.

I am happy to see Portland making some positive gains in off-road cycling after so many years, thanks to the efforts of all of the dedicated volunteers on this project. I, for one, am hopeful that this project will demonstrate the many benefits of providing a variety of off-road cycling opportunities throughout the city (trails, dirtjumps, etc). Man, I would have liked to meet Dave Wiens. The man is a legend who beat that one guy (I think his name was Lance something or other) in the Leadville 100.

Looking forward to driving to this park with a bunch of the kids who can not ride to access off-road trails (ahem, Riverview) in SW Portland. Nice write-up!