On Tuesday night we learned from Portland Bureau of Transporation Maintenance Operations Group Manager Suzanne Kahn that the gravel, which is now about a month old, was put there by the Oregon Department of Transportation. “We didn’t actually put gravel on the St. Johns Bridge,” Kahn told the PBOT Bicycle Advisory Committee at their monthly meeting. “We know who did, but we’ll clean it up anyway.” (ODOT owns and manages the bridge, but PBOT has responsibility for the sidewalk.)

I also spoke to KATU for this story. I told Andrews that the confusing, overlapping jurisdicational issues add to the frustration because it slows agency response times and the public has no idea who to call to report the debris. I also said this much gravel in such a key bicycling artery one month after storm is unacceptable. One month after the storm we still hear reports from readers about serious issues with gravel and debris in bike lanes throughout the city. PBOT and ODOT need to step up and do a better job next time around.

Read and watch the story here.

UPDATE, 2/17: The City of Portland has swept the sidewalks! A reader shared this photo of the plow in action today: 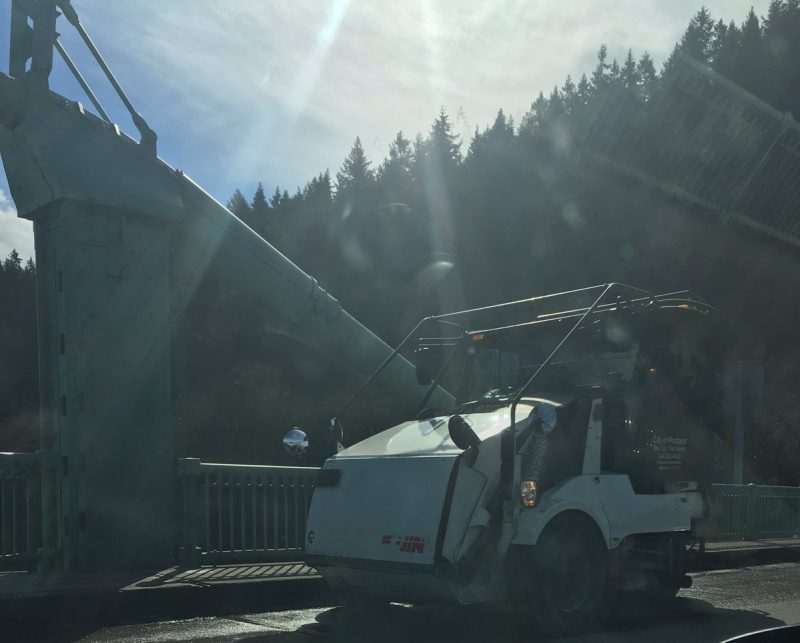 So many local creeks with so much gravel sediment.

The question I ask myself is whether I would rather have salted roads or studded snow tires. Neither are good options.

You don’t need either. Throughout the snow and ice of December and January, I drove whenever and wherever I wanted to, in Portland, with studless snow tires and 2WD.

Studless snow tires work better on ice than studded snow tires. That’s the conclusion of testing on ice skating rinks. The studless tires use a compound that remains soft at low temperatures, special tread patterns, and often abrasive particles in the rubber. They are extraordinarily effective. You can drive safely, albeit at a reduced speed, on a road that is too icy to even walk on. That situation was very common in my neighborhood.

The correct answer is studless snow tires and limited salt applications. If we have snow for one day and it melts out, we don’t need to salt. If we have another event similar to the last one, they need to salt certain roads to prevent the lingering ice that we saw. Even with snow tires and AWD, there were some very sketchy areas last time.

Ghost of Bill Clinton's Past

I think the most troubling thing, is that it seems to be their go-to excuse for inaction. Not my problem man.

Well listen, I weigh down my trash cans on windy days. My neighbors sometimes do not. Often, trash ends up blowing all over my yard. It’s NOT my responsibility, I DIDN’T put it there. However, I am responsible for my property and its residents (girlfriend and cat) enjoyment of the facilities. So, while I never am the source of litter. I have an old broom handle with a nail sticking out of it just in case.

Tim
Reply to  Ghost of Bill Clinton's Past

My favorite part is how PBOT manages just the sidewalks on the bridge. Similarly, at work when I email customers, I write the emails but make my coworkers walk to my desk and hit ‘send’.

ODOT swept Barbur yesterday however a short section of sidewalk MUP is a real mess still.
Probably the same thing where the sidewalk is PDOT’S problem.
John Brady should be fired.

I take that back. He is probably waiting for someone to call and tell him about it….

Matt Garrett and Rian Windshimer should be required to ride bikes through the gravel across the St. John’s Bridge and certify by stating in front of TV cameras that having the gravel is on the sidewalk is safe.

Plenty of gravel in the bike lane on NW 14th, too.

The discourse (or rather lack of it) between ODOT and PBOT and the rest of us reminds me of evasive parents– “Go ask your mother.” “Go ask your father.” And then a throwing up of hands.

Thanks, JM and bikeportland. And Andrews/KATU!

“highlighted the problem of gravel *in the bike lanes* on their news broadcast last night.”

Bike lanes are the sidewalks? Not sure if intentional or not, but well played, JM.

Leaves, tree limbs and gravel on Terwilliger bike lanes. I could not believe it when I went to VA yesterday. Power company bucket trucks cutting limbs, putting them in trucks and leaving the mess on the bike lane.

Its not just St. Johns bridge, this is a systemic problem on all roads. Furthermore, the longer it sits and washes back on the road and blows around, the more damage caused by the destructive grinding action between road and tire, hour by hour, day by day. Maybe this is a make-work project?<

I think at the very least if i was Pbot, I'd have a online map up for the public showing progress and planned sweeping activities.

And BTW pbot, no one cares who made the mess, with proper equipment, running over the st johns bridge would take what? an hour or two to clear the sidewalks. Standard shoulder sweeping takes minutes

The gravel from ODOT is so thick on one freeway ramp that it flows downhill and covers the Greeley Bike lane. Been that way 45 days. The city should do anything. I’ve tried the DIY method but Greeley is 2 miles of gravel and mud packed into pavement.

Meanwhile, PDX was running their street cleaner thru the short term INDOOR garage this week. Even went down the same aisle twice. The gravel free, already clean garage at PDX gets swept while bike lanes outside remain a mess. I know jurisdictions are different, but it’s quite a contrast.

Gravelgate? Gravelghazi? What are we calling this PBOT scandal please?

living in St Johns and bike commuting to downtown is also a nightmare taking Willamette Blvd these days. the “repaving” of potholes has simply made more of a mess in the bike lanes (not to mention roadways) because of the slap-job that was done. so for now, it’s a no-win-route in and out of St Johns on some of the most direct ways to downtown…

If something of this magnitude happened out in the country, 10 neighbors would have gotten together, grabbed their brooms, and cleaned the paths off in an hour or two. City people spend ten times as much energy pointing fingers and complaining.

Several people with push brooms, in a few hours, could have pushed the gravel from the sidewalk onto the roadway.

Actually if something like this happened in the country, they would have found the person who did it and make them clean up their mess…..

UPDATE, 2/17: The City of Portland has swept the sidewalks! A reader shared this photo of the plow in action today:

I found this archived on the PBOT site about 2014 clean up. It mentions that in 2008 it took them 6-8 weeks to clean up the gravel.

Can we assume they are still following the same protocol and sending sweepers to bike lanes throughout the city? Broadway, Weidler, Vancouver are pretty thick with gravel. I imagine someone trying to avoid a driver cutting them off and how easily the gravel will cause their wheels to slide out, crashing them to the pavement.

i emailed safe@portlandoregon.gov repeatedly to sweep NW Industrial, (Front, St Helens, Yeon) and they finally did it Friday. miracles do happen.

Hwy 30 is still a shit-hole tho