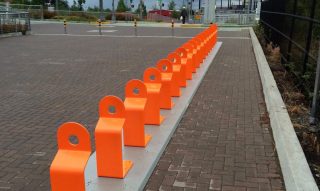 Its vessel: 100 rows of simple, sturdy metal tongues painted fluorescent orange, each with an oversize eyelet through which bike share users will thread the system’s built-in U-locks.

These rows (“stations”) will be spread around the 8.1-square-mile service area that opens for business July 19. Twenty of them will have solar-powered pillars with digital screens (“kiosks”) that let you purchase a one-time ride or a daily or annual membership on site with your credit card. 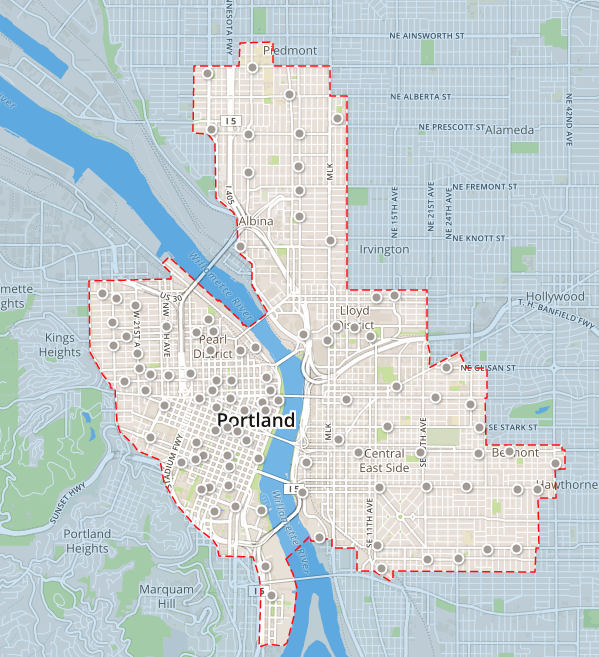 The station map and service area. Click here for the zoomable online map and here for a PDF version that has more details.

People who’ve used bike sharing in other U.S. cities may be surprised to see that these stations are different from many: instead of the wheel-grabbing “smart docks” developed for the widely used B-Cycle and PBSC systems, Biketown is the continent’s biggest launch for “smart bikes” and (therefore) for what you might call dumb docks. They don’t require wiring or even moving parts. They’re just bolted into the pavement.

The fact that all the necessary electronics are on the bikes themselves is what’s supposed to make Portland’s system cheaper than most on a per-bike and per-station basis. Smart-bike systems from the same manufacturer are in use in Phoenix, Santa Monica, Tampa, Topeka, Boise, Orlando, Ottawa, and Hamilton.

The stations will continue arriving around town over the next two weeks, Biketown manager Dorothy Mitchell said Tuesday. Then just before launch, the 1,000 bikes will be distributed for the first time.

For the moment, as the short promotional video below shows, the 1,000 bikes are stored together in an undisclosed location:

Mitchell said Tuesday that 550 annual members have registered via the Biketown website. That’s up from 428 on June 15. The first 1,000 who sign up before launch are receiving a free t-shirt and a special card identifying them as a “founding member.”

Seattle’s Pronto system had 1,154 members by the end of the month it launched, but its pricing model is very different.

Seattle’s Pronto system had 1,154 members by the end of the month it launched, October 2014, peaking at 3,186 a year later. Seattle has in the past projected that a 1,000-bike Pronto system would aim for 8,000 members to be healthy. But Pronto’s pricing model is very different than Biketown’s; among many differences, Seattle’s annual memberships cost $86 per year to Portland’s $144 (billed in $12 a month installments).

In any case, to succeed Biketown will need to do better as a business than the moderately troubled Pronto has so far. Motivate, the New York-based bike-share operator that has assumed all the risks and half the rewards of Biketown’s performance over the next three years, is counting on Portland’s advantages (flat terrain, no adult helmet law, a beginner-friendly pricing model, spillover bike parking, a bike-friendly culture, some of the nation’s best station density and a generally larger network of destinations) to make up for Portland’s challenges (lower density and lower transit commuting rates).

Some companies and institutions are likely to offer discounted or free memberships to their employees, students or members. Any memberships that result won’t start coming into the system for another month or two.

Considering that Tuesday was the second business day of the Biketown launch month, it’s anybody’s guess what’ll happen with memberships by the end of this month — especially as brightly colored objects continue to appear on 100 street corners around the city. Some of them will even take credit cards.

Update 7/8: We’ve removed the lead photo because it featured my bike leaning against a bike share station for scale. We didn’t want to set a subconscious bad example — people shouldn’t park their private bikes there.

I think (hope?) that memberships/signups will expand rapidly after launch. It’s a lot easier to consider buying something when you can actually interact with it.

What’s the legality of locking a non-bikeshare bike to the orange racks?

Is that picture the “final installation” or will the black curbs be added (like the ones that exist on bike corrals)?

Does anyone want to take bets on how long it will be before one of these “stations” is hit by a car? That one on 39th looks like it might be the first to go. I’m optimistically saying 2 months.

As I understand it, it’ll be legal to lock bikes to the Biketown racks, though IMO it’d be sorta jerky to do so. The city expects to rigorously enforce its abandoned-bike rules, but those don’t kick in for a few days.

Hopefully it’ll be more incentive for the city to keep up with providing enough standard bike parking in high-demand areas.

I believe you can only leave a bike in one location for 72 hours.

I imagine this rule is enforced equally as much as the same rule for parking a car on the street – i.e. not at all.

How long do personal cars parked in a reserved Zipcar spot last before being ticketed/towed?

Please, please do NOT park private bikes at BIKETOWN stations. Our operator Motivate will be removing them after providing warning.

As Michael states, our smart bike system provides a lot more flexibility – along with the aforementioned challenge. Please help us out by getting the word out.

Will there be any signage indicating that other bikes can’t be parked there?

What about places that have no other bike parking?

Above Michael says it will be legal to park a personal bike to these racks but you say they will be removed by Motivate.

Is it legal or illegal? If it is legal, how can Motivate be allowed to remove them?

Motivate is definitely trying to get the word out to stay off their, currently empty, racks.

That people are using them indicates that we have a shortage of racks in the area. I’m a little concerned that giving this public space to Motivate could actually hurt our chances of getting needed bike racks in place.

Motorists are much more respectful of anything that will damage their cars appreciably. These locking posts look like they would do a number on a car, and I suspect that collisions will be infrequent.

Slick system, having the electronics entirely on the bikes instead of the kiosks, as opposed to the Nice Ride system I’m used to. I got a close up look at this last week. There’s a decent sized solar panel built into each bike’s rack/lock/electronics module to provide power. And of course this also allows the bikes to be “returned” at non-kiosk locations.

I bet not having to wire them in must save on installation cost, not to mention allowing a lot more flexibility in relocating/adding stations in the future. Can’t wait to try this out when I’m there again next month.

For what it’s worth, most B-cycle stations don’t require any wiring either. I just moved to Philly and was super excited to find a new station installed close to our house, and it was installed and finished in only a few hours. They typically use solar panels on the kiosk, and have an antenna that I assume communicates over cellular connection, because I usually get a text about my rental within a few seconds of checking out a bike.

Saw one at 19th and Johnson this morning. Doesn’t seem to be on the map, what gives?

I just registered, and apparently customers have to memorize both a six digit account number and a four digit PIN to unlock bikes. That seems a bit user unfriendly. Will there be any way to get a card (like ZipCar and Car2Go) that will unlock a bike?

Yes, users also get a card that they tap on the bikes.

Great. That wasn’t at all clear from the registration pages or confirmation emails they sent.