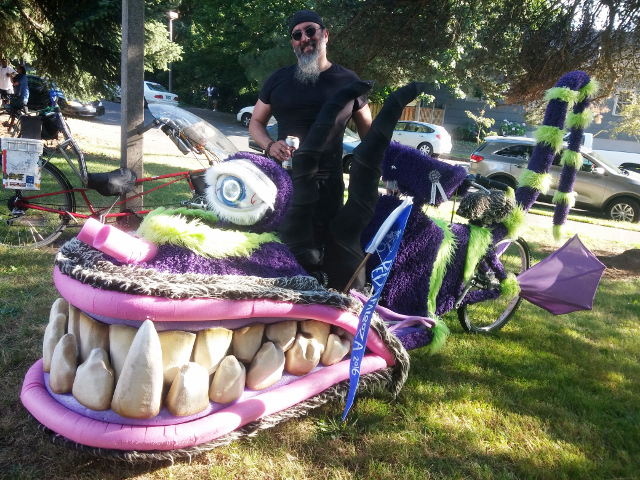 Dan S. with his creation, the democratically elected “best bike” of Pedalpalooza 2016. The jaw opens and the eye blinks.
(Photos: M.Andersen/BikePortland)

Portland’s annual open-source bike festival ended Monday with a cookout picnic in Woodlawn Park, complete with a vertical flamethrower rigged atop a huge bike-towed grill and a dozen handmade awards for the best rides and riders of the year. 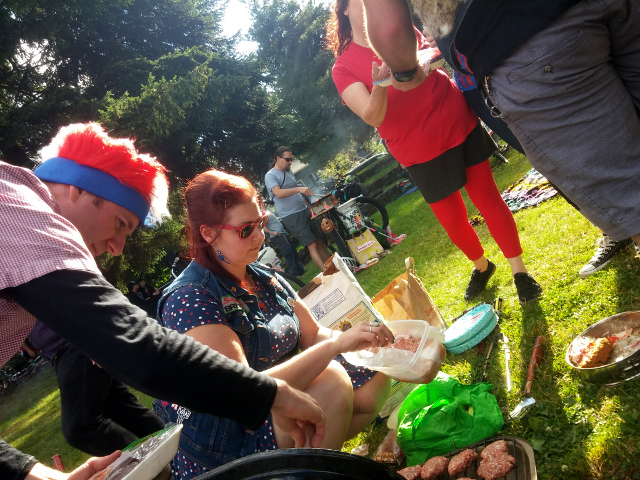 Gerald Fittipaldi, left, was named “Rookie of the Year.” He also enjoys hamburgers.

The awards had been chosen by an online ballot. The ballot, like the awards themselves, were created by volunteers for Shift, the nonprofit that organizes the festival each June. 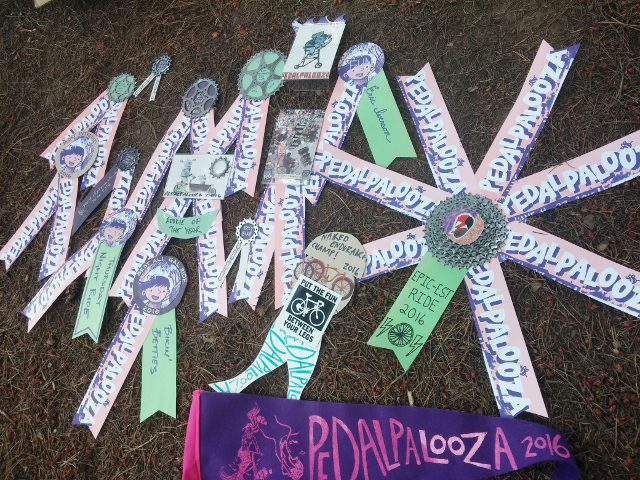 The Best Bike award went to the Fuzzy Monster Bike ridden by Splob, also known as Dan. Dan said Monday that he lives in Oakland, Calif., but visits Portland a few months each year for family reasons and always tries to make sure it’s in June.

“It’ll be back,” he said of his amazing bike.

This year’s massive edition of Bowie vs. Prince, the final one of the series, was named the Most Epic ride of 2016.

Tour de Hives, a ride to various beehives, was named the Most Informative ride of the year.

The massive Thursday Night Ride was honored as the Most Inviting ride of the year for drawing riders of all backgrounds. 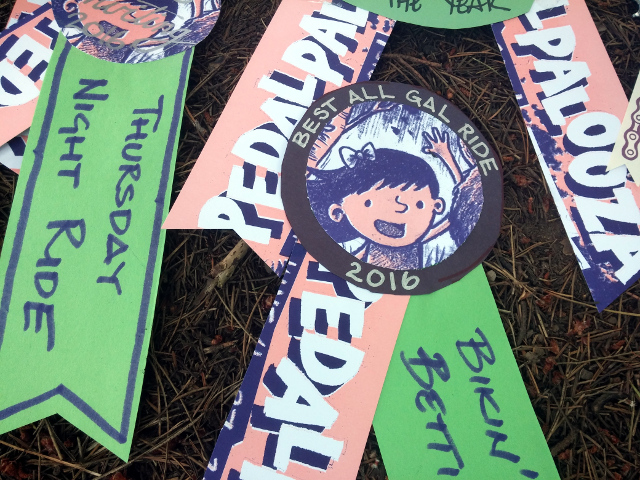 The Bikin’ Betties, who led all-ladies’ rides on Monday nights, won Best All-Gal Ride — one of several award categories created via the contest’s “Make Your Own Award” category.

The long beloved Dropout Bike Club won the award for being the Most Prepared.

Scott Batchelar took home the prize for the Most Prolific Pedalpalooza participant of 2016. “He led more rides than I rode,” emcee Carl Larson said in respect. 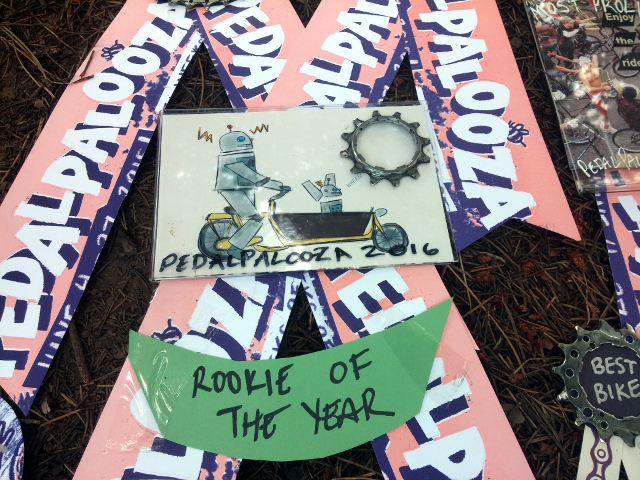 Gerald Fittipaldi was honored as Rookie of the Year, with a special citation for his work on local bike advocacy.

Dave McHappywheel won for Best Costumed rider of the year. 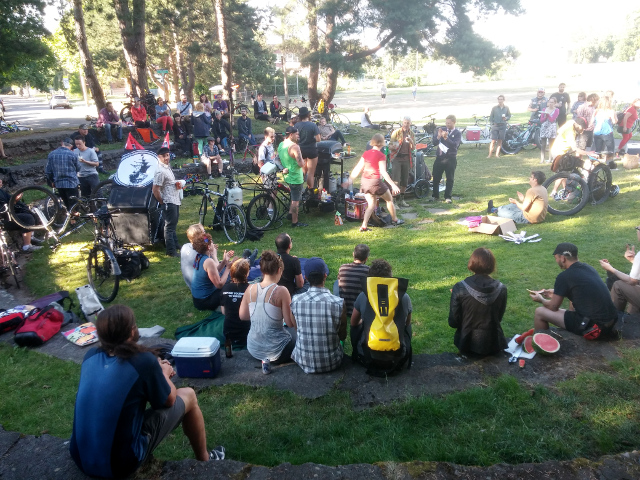 Maria Schur, center, leaps up to receive her award for leading the wettest ride of the year.

Swim Across Portland (which visited public outdoor pools) won for the Wettest ride of the year. 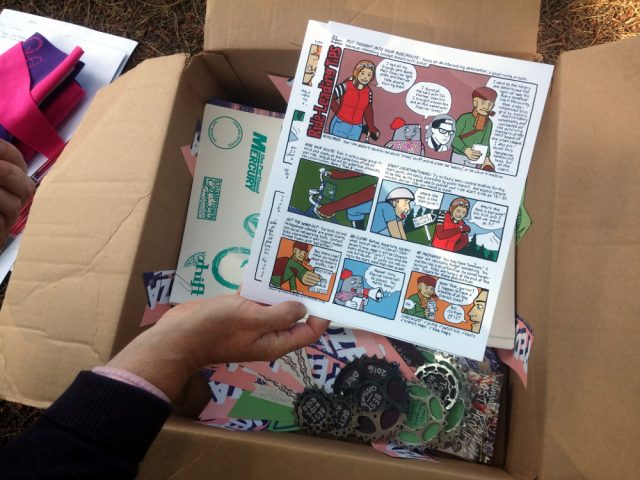 Some winners received a copy of the ride leading tips comic by Shawn Granton.

Eric Iverson of Grilled by Bike was named the festival’s Bringer of Fun.

And Michelle Z, who weathered a health challenge to join three group rides, was honored as the Most Intrepid rider of the year.

At the close of the ceremony, Ken Southerland took time to recognize Larson, who he said had been a fixture in Portland biking since he spent two weeks on someone’s front porch in 2006 and then the next 10 years claiming he was only visiting for a short while. Larson is moving to New York State next month.

“This is going to leave a hole,” Southerland said, choking back tears and giving Larson a customized plaque.

Monday’s event closed with a round of cheers and applause followed by, of course, a bike ride. 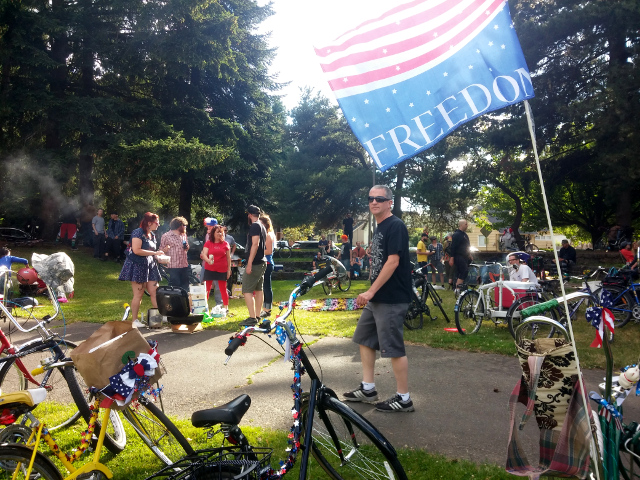 Liuba couldn’t stick around long enough to learn she had won an award (attagirl!) – how may she collect her trophy?

And because the mention above was relatively brief, let me expand a bit:

Liuba Vevesali, was the only fem-bodied person to complete the entire Saturday day-long cycle of naked rides (including naked metric century) cuminating in the WNBR, all on a wobbley-wheeled war-era single-speed balloon-tire coaster-brake rust-pile of a beautiful bike.

I didn’t have a notebook to write the details, and didn’t want to get them wrong! Thanks, Craig. I would contact Chris Fool McCraw in search of the trophy – he brought them Monday.

Sad I missed the awards……but we had to get kittens. This was an intense month, and catching up.on sleep is needed, but alas…..kittens.

The “Lemmy is God Ride” was the best ride.