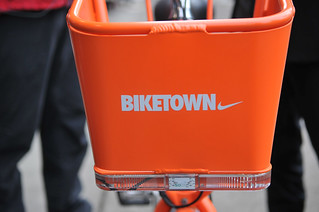 Coming soon. And cheaper for some.
(Photo: J. Maus/BikePortland)

When Portland made its first attempt at bike share in 2011, concerns about equity gave local leaders pause. So when the City rebooted the idea they made sure it would be accessible to as many Portlanders as possible; rich and poor.

Now the nonprofit Community Cycling Center will add to those efforts thanks to a $75,000 grant they just earned from the Better Bike Share Partnership, a collaboration between the City of Philadelphia, the Bicycle Coalition of Greater Philadelphia, People for Bikes, and the National Association of City Transportation Officials (NACTO). The program, “strives to increase the accessibility and use of bike share in underserved communities.” The CCC’s award is one of nine grants totaling $532,000 that were announced today.

The CCC’s grant funding will be put toward a grassroots outreach and education effort that will start when the BIKETOWN bikes hit the streets in mid-July. The marketing initiative will be aimed at Portlanders living on low incomes. “In addition to offering very low-cost memberships through workshops, they will also use community feedback to improve and guide the system through launch and its first year of implementation,” reads a press release about the grants. 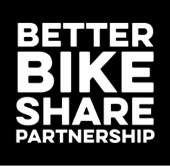 The Portland Bureau of Transportation has already set the cost of using bike share lower than any other major system in the U.S. It’ll be $2.50 for 30 minutes or 90 minutes free per day with an annual pass that costs $10-$15 a month. Because of the public blowback about equity the first time around, PBOT has made it a much higher priority for BIKETOWN. In addition to the system being relatively inexpensive to use, the City of Portland has committed to hiring BIKETOWN staff from underserved populations and paying them a “living wage.” PBOT also got a huge boost when Nike’s sponsorship came with a 60 percent larger service area which has allowed them to expand the program well beyond the central city (a key criticism in 2011).

CCC is a natural partner for this type of work. Through their adult bike safety education and earn-a-bike programs they already have strong relationships with social service agencies and affordable housing providers. Through their groundbreaking “Understanding Barriers to Bicycling” project they learned that the two biggest reasons people in underserved communities don’t bike is due to access and cost.

With this grant the CCC will offer lower cost BIKETOWN memberships after people have taken a class on bicycle safety and a workshop about how to use the system. The $75,000 will help fund the equivalent of 500 annual memberships.

Thank goodness for this grant – $2.50 for 30 minutes is a lot of money.
Although it’s important to address equity among residents, I think BIKETOWN will mainly be for tourists during the warmer months rather than daily commuters, so I prefer the pricing system for Seattle’s Pronto! bike share. $8 for a day pass or $16 for a 3-day pass, includes unlimited rides.

Not really. Compare it to Car2Go or transit.

Also I think the membership price has been settled at $12/month.

Is the free period for members really 90 minutes per day — not per trip?

Nice Ride MN is 30 minutes free per trip for non-members, or 60 minutes for members. You can dock the bike, check out another one immediately, and keep on riding. Theoretically you could ride all day for free, as long as you stay close to the service area.

Sorry, that was an aside. Back on topic: this is really excellent news, because even with 90 minutes free per day the membership fees would be onerous for many.

This pricing structure does confuse me a bit. I was a member of DC bikeshare for many years and annual memberships (daily, etc) gets you unlimited <30 minute trips. I'm not sure the pricing above 30 minutes.

Are you saying that under this pricing scheme, basically a member would be able to use the bike 3x per day for 30 minute or less trips- but would pay for each additional trip on top of that? Or are they actually measuring minutes and it's unlimited trips up to 90 total combined minutes?

My fear is that it's the first and that would be a bummer. I'd like to think you can make at least two round-trip, less than 30 min rides per day on the system with an annual membership. Makes it hard to run errands on a saturday if you can only check out 3 bikes before paying extra per trip.

Sorry for the confusion about the pricing. Here’s the PBOT FAQ blurb about it:

How much will it cost to use a bike share bike?

The City and Motivate have agreed that the cost will be an average of $2.50 for 30 minutes of use. Most bike share trips are under 20 minutes. The $2.50 average cost for 30 minutes will be the most accessible fare pricing of any major U.S. system. This low-cost fare product is designed to encourage a wide range of Portlanders to bicycle.

BIKETOWN’s annual membership will offer up to 90 minutes of bike share use per day. The annual membership price has yet to be finalized, but will cost between $10- $15 per month for a twelve-month contract. In addition, the City and Motivate are also exploring a pay per minute to pay as you go pricing structure.

Will credit cards be required for the memberships, including the discounted memberships?

Actually, BIKETOWN will not be the cheapest 30 minute ride out there. Pittsburgh’s Healthy Ride (50 stations, 500 bikes) costs $2.00 for a 30 minute trip (https://healthyridepgh.com/pricing/).