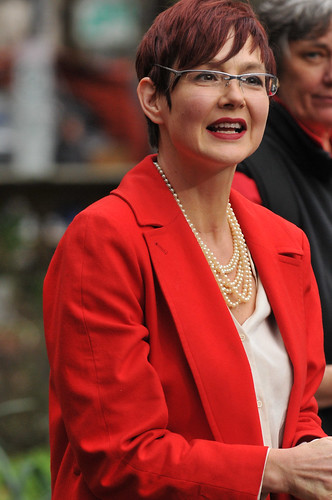 A political action committee that bills itself as “the political voice for Oregonians who bike, walk, or take transit,” has thrown their weight behind Sarah Iannarone in the Portland mayoral race.

That’s one of eight endorsements Bike Walk Vote PAC has just released for the 2016 election cycle. After laying low following the 2012 election, Bike Walk Vote has rebuilt its board and hopes to become a significant player in the education and influence of regional voters who care about transportation reform.

In choosing Sarah Iannarone over the other 15 candidates — including the much more well-known Ted Wheeler and Jules Bailey — Bike Walk Vote credited her “depth of knowledge about the intersection between the built environment and public policy.” Iannarone has learned about this subject over the past eight years as assistant director of First Stop Portland, a program at Portland State University that shows off Portland’s transportation innovations (among other things) to officials from around the world.

“Sarah Iannarone has a depth of knowledge about the intersection between the built environment and public policy and how they influence transportation system design, safety outcomes, equity, and personal transportation choices. Additionally, she has the bold vision to move the city from it’s current state of resting on laurels to re-emerging as a model city for active transportation. As the only citywide candidate who lives, works and rides in east Portland her perspective is needed at city hall.”

Unlike Bailey and Wheeler, Iannarone is making transportation reform the main platform of her campaign. During a recent appearance on OPB’s Think Out Loud radio show, Iannarone was asked to share what’s next for Portland. “There’s not anyone talking about, are we going to continue to build for the automobile? Or are we going to double-down on making sure that we have good transit that’s accessible and affordable for all Portlanders?” She has also repeatedly stumped for a “carfree central city.”

Bike Walk Vote gave a “green light” to both Bailey and Wheeler, saying they have strong records on active transportation and “have the skills to represent the transportation needs of the city.”

Bike Walk Vote has also endorsed incumbent City Commissioner Steve Novick. “One thing that set Novick apart from the other candidates that we interviewed was his clear understanding of parking policy and induced transportation demand.” They also felt that all three leading mayoral candidates will be more progressive on transportation than current Mayor Charlie Hales and Novick is well suited, “to take full advantage of this new political landscape.”

In the state legislature, Bike Walk Vote has endorsed Tawna Sanchez for House District 43, citing her, “clear commitment to safety including a desire to end the disastrous nature of ODOT’s management of their orphan highways.”

PDF has bad pagination. Can it be reformatted?

The lack of any endorsement for City Commissioner Seat 1 speaks volumes.

I am really hoping for an interview with her. Well, not for me to interview her of course 🙂

From what I can tell, she seems like a very good candidate.

We’ve already interviewed her and will publish the piece early next week if not sooner.

That’s great to hear! I’m really looking forward to it.

Dan A
Reply to  ethan

Your support (wink wink) makes this kind of journalism possible.

ethan
Reply to  Dan A

Thanks Dan! I should support this site since I read it so frequently.

Let’s hope the zest for untraditional candidates carries through to the local. Big fan of Sarah

Tactical politics: Probably she will take votes from Bailey, but not Wheeler, making it likely Ted will win outright in the primary.

Wheeler has to get over 50% of the vote to win outright. If he doesn’t receive a majority the top two candidates head to the November election. If Iannarone picks up votes from people that might otherwise be inclined to vote for Bailey it makes no difference to Wheeler’s chance of winning outright.

And, if she picks up even one vote from Wheeler, it decreases Wheeler’s chance of winning outright, which is good for Bailey.

I think tactically Sarah will take votes from both Jules and Ted, plus shore up independants. Having helped code Bike Walk Vote’s questionaire and listening to the responses of all three Candidates in our interview she has the boldest and most comprehensive vision. She understands the needs east of Ceasar Chavez where there is no representation at city hall.

We need a leader. She was the only one to talk about how important bike culture is to Portland during the Bike Walk Vote interviews. She is in tune with the city.

Anyone need a Vote Sarah for Mayor button? I made a bunch of them today. Vote Sarah!

Dan A
Reply to  Terry D-M

Well now I’d like to know if any of the candidates plan to get Fritz off of parks.

* Voted against Bike Share…
* …because she sees people riding on sidewalks…
* …and evidently made sure there are no bike share stations in any of our parks
* Voted against the entire West Quadrant Plan, because no one supported her amendment to stop height increases on select sites in Downtown
* Voted no on a series of code amendments that would make it easier to build small ADUs
* Halted consideration of an off road trail in Forest Park
* Amended the NW Parking Plan to slow down the installation of meters
* Voted to add parking minimums for apartments along Frequent Service transit lines
* Banned mountain biking in River View Natural Area
* Concerned about cost of Flanders Greenway
* Does not like driving on Williams in rush hour because of all the cyclists on it

(And there ends the maccoinnich airing of grievances)

I wonder how Sarah would do against Fritz

Thank you for taking the time to outline why we could not issue an endorsement “based in Her record.”

This is a puzzling endorsement. Why endorse someone that has no chance of being elected? This endorsement seems like a good plan if you want to have less influence over the person that ultimately wins the election. I can understand principles but this is just bad politics. Iannarone has zero chance of becoming mayor. Do you think any big labor union would have endorsed Martin O’Malley for the Democratic nomination? They did not because they knew he would not win and they would have strained their relationship with the eventually winner.

We did green Light Ted and Jules. Since there has been no polling, and there is a lot of exciting talk about her, I’m not sure how you can discount her so fast. They each have a different angle and approach. All three understood the Miss-messaging of the Adam’s administration, but embraced the policies.

In any case, the new Mayor will be much more bike friendly than the current administration.

She absolutely has a fighting chance of getting into the general election if a few breaks go her way and she can get the word out.

Wheeler encouraged Bailey to run against Novick because of Novick’s intolerable actions in the UBER business. Bailey is running a strong campaign, so Wheeler’s action seems self self-serving, but a strong candidate in the Position 4 race would indeed have been useful.

“Go By Bike’s” conjecture is right on: Iannarone would have been a pretty strong candidate against Fritz, with a real chance of winning.

Bailey against Novick and Innarone against Fritz with Wheeler for mayor could have changed Council radically.

It is sad that we appear to have 3 capable candidates for mayor but none of the worthless city councilors will have any competition. Basically a city council position in Portland is a position for life regardless of how badly the city mishandles city management. Screwed up water bureau – no problem. Streets falling apart – no problem. Homeless mess – no problem. 3rd world type heavy metal pollution – no problem. While all these big issues come up the city is busy spending money to create an office of equity, using water money to buy parkland, spending big bucks on a gold plated new building for BES, arguing for two years about where to put right to dream too, ignoring pedestrian and bicycle safety unless a pedestrian gets killed trying to get across the street, etc.

I have run for city council in Portland. Having a 9-5 job that you cannot afford to go on leave from made it very difficult to attend election related events and do much campaigning. Unless you are retired, a professional politician, independently wealthy, or in a job that you can take a 9 month leave from without getting fired you cannot run for a major office.

Everyone wants to be Mayor even though the position basically doesn’t have any more power than any other council seat. Maybe you get some more bully pulpit & you get to assign bureaus.

I was part of a group that elected it’s officers in order of ranking position, so somebody who wasn’t elected as president could then run for VP if they lost out, or for the next position available below that. It was a good way of getting the best people for each job.

Very tall order for Iannarone to beat out either Bailey or Wheeler in the primary.