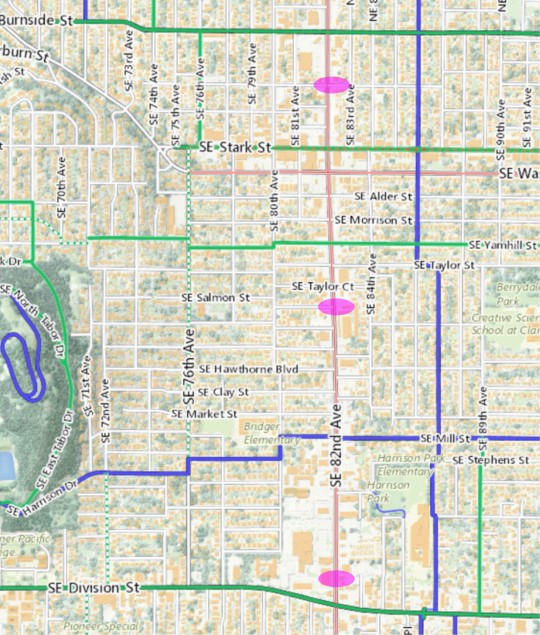 Location of three intersections that will get “enhanced pedestrian crossings”.
(Base map is Metro’s Bike There map to show location of nearby bikeways.)

The Oregon Department of Transportation wants you to learn more about their plans to make several changes to SE 82nd Avenue. They’ll hold an open house for their 82nd Avenue Intersection Improvements project next Tuesday, January 26th.

The project will impact nine intersections. At six of them — Burnside, Stark, Washington, Yamhill, Mill and Division — ODOT will upgrade traffic signals, add curb ramps to meet ADA standards, and add more reflective street signs. Of particular note is that five of those intersections rank among the top five percent of high-crash sites in the region. And SE Mill is currently part of a neighborhood greenway route. At three other intersections – Ash, Salmon, and just north of Division — ODOT will build “enhanced pedestrian crossings.”

Here’s more from ODOT about those crossings:

The enhanced pedestrian crossings will each include signage and a pedestrian refuge “island” between the northbound and southbound lanes on SE 82nd Avenue. In addition, crosswalk striping and Rapid Flash Beacons will be installed at the crossing north of SE Division Street, where there are more pedestrians crossing SE 82nd Avenue to get to and from Portland Community College (PCC).

The project will cost $5.4 million dollars and it comes ODOT’s Transportation Safety Programs budget. $400,000 of that total cost is being spent on the three intersections getting enhanced crossing infrastructure. The project is part of ODOT’s long-range focus on making updates to 82nd.

Next week’s open house is set for 5:00 to 7:00 pm in the cafeteria of Harris Park Elementary School (2225 SE 87th Ave). Construction is scheduled to begin in early February and be completed by this fall.

Do they plan to cut down street trees?

Have you ever seen an ODOT project that did not include tree removal?

I tried to explain to an ODOT engineer that removing trees to “improve sight lines” actually made the street less safe because now drivers will be able to see further and naturally drive faster because it feels safer to do so. He was stubborn to consider that as a possibility, to say the least.

Oh, I had one grudgingly admit it at the Powell open house this summer, but then he mumbled something about there being lots of considerations.

Ah yes. The old “we need to consider all modes” defence.

Drivers will ignore the signs and zebra crossings. What needs to be done is a narrowing of the roadway and a timing of signals to limit drivers to a maximum of 20 MPH. At a minimum, the refuge islands should feature a leading and trailing median that protrudes into the travel lane, similar to this installation at NE 33rd and Klickitat.

Speed is the number one factor in determining if a crash will be fatal and so far, nothing ODOT is presenting actually aims to slow down drivers to a safe speed. Placing additional responsibility on people walking to push buttons is a band-aid and not a long-term solution.

I’m with you on the danger of speed.

I have seen no evidence, however, that employing reduced sight lines to reduce speed makes the road safer for anyone. I’m thinking specifically about on-street parking though. Maybe that’s my personal preference. As a ped, I like not having to step eight feet into a street to see if a car is coming.

The cutting down of trees is simply absurd.

I’m referring specifically to the removal of street trees to improve sight lines. ODOT has stated they planned to do this on Powell.

I completely agree on the parked cars blocking sight lines for people walking, though. There should be parking removal before and after all crossings and intersections. It’s technically already illegal to park within 20 feet of an intersection or crosswalk per state law, but this is not enforced in Portland.

I have to disagree about the median that protrudes into the travel lane and the trees.

In addition, the pedestrian ‘refuge’ forces all traffic to veer toward the sidewalk as they pass through. I feel uncomfortable trying to pop my head out from behind all the obstructions to see if there is any traffic coming because, if there is a car coming, it will be veering directly toward me.

Perhaps these things work in other places but, on this stretch of Stark, the lack of visibility, speed humps and, pedestrian island in the middle of the road don’t do anything to slow down traffic.

Compare this to the intersection at SE 57th and Stark which I also cross frequently. (also, with dogs in tow) I can see traffic in both directions. Drivers can see me, even if I’m far from the lane of travel. In both directions, I can actually put a foot out onto the road (thus, legally obliging vehicles to stop) without being directly in the path of an oncoming car.

At 57th, the traffic is probably somewhat faster but, that traffic is well removed from the sidewalk.

You just have to have your front wheel in the road and they are legally required to stop.

The narrowing of the travel lanes is designed to slow drivers down. If they are not slowing down enough to be able to stop for you, perhaps more treatments could be done, such as a lengthening the median so drivers slow down earlier, installing a raised crosswalk, putting in bollards on the sidewalk, etc.

In this location, I would prefer removing the pedestrian island and extending the curb out into the ‘parking’ lane. This would narrow the lanes of travel, it would also make the total distance to cross smaller. In addition, a crossing pedestrian is able to step out beyond any sight barriers (parked vehicles, trees, signs, utility poles) without actually having to step into the path of a vehicle. Somewhat like at SE Hawthorne and 29th though I’ve seen better examples around town, I just don’t remember where they are.

Agreed on the curb bump-outs. I’m actually not sure why the refuge island treatment was done here instead of the bump-outs, since Stark is only two lanes. Probably because of the bike boulevard crossing? Typically, refuge islands are used on wider streets to break up the crossing distance.

Curb extensions are less safe than median refuge islands. Curb extensions that only shorten the crossing of two lanes still require those crossing the street to find two gaps in opposing directions of traffic that are moving and will align at the same time at their crossing point. This is a difficult task for our youngest and oldest pedestrians.
Median refuge islands permit those crossing the street to concentrate on one direction of traffic at a time, a much easier task. The island provides a point of refuge a centerline stripe will never provide, and once in the middle there is no doubt of a pedestrian’s intent to cross the road, so drivers on the other half are required to stop.
The other benefit of median islands is that traffic on the other side of the island does not have to stop until the pedestrian gets to the island, so there is less delay to auto traffic associated with refuge islands.

As Adam said, this may make sense on a 4 lane road with a turning lane in the middle but, on a 2 lane road with poor visibility to begin with, it is a design that is worse than just painting a striped crosswalk.

Mike,
my opinion is based on actual data.

Studies have shown 54%-60% of the pedestrian crashes at median crossings compared to crossings without them.
http://www.cmfclearinghouse.org/results.cfm

curb extensions have not been studied much. the only study so far is of low reliability, but found a 12% increase in pedestrian crashes.
http://www.cmfclearinghouse.org/results.cfm

How dare you bring data that refutes what my gut tells me? 😉

The links appear to be generic “results” links that don’t show anything. However, I believe you know your stats. The problem with statistics is they only show what the statistic measures. Perhaps median crossings are safer ‘in general’ but, at this specific intersection, it is a poor choice.

Think of it this way, statistics may show that the Generic100 bicycle is the best bike value available today. And, perhaps that is true and 80% of riders would get more/better bike for their money if they purchased a Generic100 bike. However, if I’m 7 feet tall or, weigh 300lbs or, have a peg-leg there may be better bike values for my unique set of circumstances.

So, my opinion is based on crossing this intersection literally 100’s of times every year and observing this particular design, while perhaps safer in many cases, is a hot mess at this unique location.

I have yet to see anyone propose removing utility poles for better sightlines. Yet trees with trunks no bigger than utility poles are often slated for removal. (or signal poles, or streetlight poles)

The difference being that utility poles need to replaced, not just removed. Sadly, with trees it’s often that they just are removed.

A $5 million “safety” project on one of the most dangerous roads in PDX and we get only one rapid flash beacon.

So…most of the money is being spent on motorvehicle level of service.

Based on their approach with 26th/Powell, will ODOT be requiring removal of existing bike lanes on Burnside, Division and Woodstock in exchange for the three new “enhanced” crossings?

They already have removed the bike lane for a block on each side of 82nd on Burnside!

When did they remove it? I think you are mis-remembering, since the current layout of bike lanes is the same as what was there in 1996. I doubt the last half to full block was ever striped, since the space was already in use for the left turn lanes on Burnside.

Well, they are all sub-par facilities, so no one’s gonna miss them anyway. Why take Division with Mill St right up the road? You only ever need a single bike route for any given area. Plus greenways and bike lanes are completely interchangeable. And if they remove the bike lanes on Burnside, Division, and Woodstock, no one will ever try to ride on these streets again, ever. No cyclists, no collisions involving cyclists, Vision Zero!

Are you practicing for a job interview at ODOT? 🙂

paikiala
Reply to  B. Carfree

either trying to be funny (failing) or misunderstood the initial post as a jab at ODOT over the 26th compromise.

Jeff Snavely
I’m with you on the danger of speed.I have seen no evidence, however, that employing reduced sight lines to reduce speed makes the road safer for anyone. I’m thinking specifically about on-street parking though. Maybe that’s my personal preference. As a ped, I like not having to step eight feet into a street to see if a car is coming.The cutting down of trees is simply absurd.Recommended 5

At the Library crossing on se122nd, they’ve planted new trees blocking the view of oncoming traffic on the East side of street , within 15 feet. It’s like they want peds hurt (or their brains were turned OFF the day they chose that location)