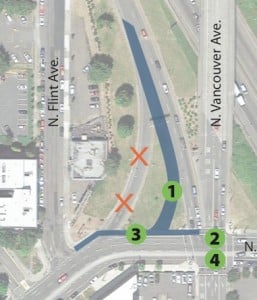 The extra “slip ramp” from
I-5 onto Broadway would close.

Here’s some good news about one of the most dangerous spots on one of Portland’s most popular bike routes.

The Oregon Department of Transportation and City of Portland are planning to break ground this spring on much-anticipated changes to the area where a southbound Interstate 5 offramp drops people fresh off the freeway into a slip lane that curves across the North Broadway bike lane.

This project had previously been scheduled to start next summer.

The changes planned will mean that when someone exits I-5 to head across the Broadway Bridge, instead of seeing this (a “slip lane” that is all but begging people to roll through it, right into a bike lane)… 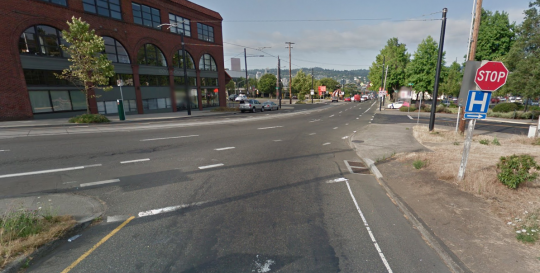 ODOT will close the existing slip lane and the exit will land further from the confusingly aligned intersections of Flint and Wheeler that have been the site of repeated bike-related collisions over the years.

According to Betsy Reese, a biking and walking advocate who previously owned the nearby Paramount Apartments and has continued to track the issue, the changes “should markedly reduce the chaotic cluster of crossing movements between motor vehicles, bicycles, and pedestrians at this location.” 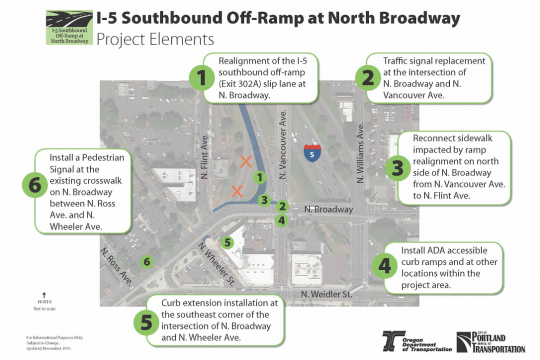 The good news continues. Thanks to increases in the number of people walking in the area (possibly related to new developments and economic activity nearby), Reese said the new pedestrian signal to be added between N. Ross and N. Wheeler (marked with a 6 in the ODOT graphic above) “will be a standard ‘Red-Amber-Green’ signal, just like the signals at Vancouver, Benton and Larrabee.”

Reese writes that this is an upgrade from earlier plans, which had called for a hybrid beacon that has only red and amber lights and goes dark when not in use.

As noted in the graphic above, the project will also add a new curb extension on the southeast corner of Broadway and Wheeler. This should calm traffic and make crossing easier.

This project is a major victory for Reese and other advocates who’ve spent years persuading the state and city that fast-moving traffic off the freeway should not be the top priority in this important corridor just outside downtown. Broadway has a long way to go before it’ll be the comfortable biking route from Hollywood to downtown that it’s destined to eventually become. But this is a significant step toward making that possible.

awesome! and now ODOT will provide more greenspace in the central city in which to camp and chop bikes on. a win for road safety and our housing shortage all in one fell swoop.

Have the new trees been confirmed?

It certainly looks like an improvement, but it would be even better if the new off-ramp intersected Broadway at a 90 degree angle, as the second photo suggests. As drawn, drivers will still have to look behindish to see a cyclist approaching in the bike lane.

Gary B
Reply to  Hello, Kitty

Yeah, that’s a major shortcoming. Exactly how the offramp by my house is (I5 N onto Corbett), and drivers treat it like a yield, completely blowing through the crosswalk. I’ve been nearly hit on foot repeatedly. And of course far more peds and bikes at this location, and it’s being newly built! Come on ODOT, the poor cars can navigate a hard 90 turn.

Gary B
Reply to  Hello, Kitty

I just emailed the project leader. I think they’re still doing final design, so maybe it’s not too late.

The next baby step is to separate the bike lane on Bway starting at Williams Westbound. It’s pretty clear 4 lanes is overkill when only two make it onto the Broadway Br.

I’ll be happy if they improve the drainage on N Vancouver as it bridges over I5, where they indicate the sidewalk will be restored. Every time we get above average rain, that bridge gets a 9 inch deep puddle.

Will the asphalt be replaced with trees and shrubs? A cap over I5 is needed between North Flint and NE Weidler to activate lost land.

Cool….close it and rezone it commercial. Let a Starbucks or something move in.

Why are they building a new ramp at all? Just close the slip turn ramp and add a right turn light from the existing ramp.

Why is ODOT spending money rebuilding something unnecessary like this when there are safety issues with their existing infrastructure?

Because you’ll have stopped traffic on 1-5.

We’ll have stopped traffic on I-5 as long as there’s somewhere for them to park at the destination.

There’s always going to be stopped traffic on I-5 at some times during the day.

Another option would be to close the Broadway / Weidler I-5 exits. 99E and 99W both will take drivers to that area as well. This would make the area safer and would keep I-5 moving.

Hmm, no. Closing that exit is definitely not an option. There is a pretty big gap in local access if you close Broadway/Weidler.

There’s no gap in access since people can still get there pretty easily.

True. I know because when I drive downtown I’m dodging it between Greeley and the Broadway exit. But that’s through-traffic. There isn’t traffic stopped on the freeway because they’re isn’t enough throughput for them to get off the freeway at the exit.

I believe that since right turns onto Wheeler were banned, that the collision problem has largely disappeared. I’d like to see a re-examining of the data because I think this is chasing a problem that no longer exists.

I’d like to see drivers aggressively ticketed for encroaching on the bike lane because that’s a problem that doesn’t come close to being addressed by making drivers queue longer on the off-ramp before turning onto Broadway.

Because they are saving money by not fixing real problems like Lombard.

So they can say “we are spending x million on this intersection”.

This looks like a great potential project for a parnership with the folks at depave. Safer streets and a greener city! Win/Win. http://depave.org/

Yes! Just what I was thinking. See my comment below.

But don’t make volunteers do it all. We the public (ODOT) should pay for green improvements to our highways!

That happens no matter what.

It would be nice if this improvement also included a pedestrian crosswalk at Williams and Broadway on the north side.

I suggest they depave the lane, plant trees and/or put in a greenstreet bioswale. If ODOT doesn’t get in the way, this would be very a small mitigation for all the untreated air and water pollution from our public highways. It would also help traffic calm Broadway and provide a noise and pollution buffer to the children in the daycare center right next door. It is heartbreaking to see them in their tiny paved, de-natured outdoor play area right next to the freeway.

Maybe even cut down on some I5 flooding.

I will probably be the lone voice here to point this out but I just can’t imagine how this is going to function come game/concert time. This area is already a giant cluster F when an event is happening. All that exiting traffic will just back up onto the freeway and cause a cascading series of traffic jams.

Not the most pressing matter for most bike Portland readers but almost all of us also drive a car once in a while right?!

Well that’s always one of our big arguments about not being licensed and insured right? (and paying the mythical road tax) That the vast majority of us are also drivers?

Perhaps if the city, the venues, the garage owners, et al, charged an appropriate price for parking, all those event-going cluster F-ers might start to think about smarter ways to get there.

“is all but begging people to roll through it”

because stop signs are optional to 99% of drivers…

“because stop signs are optional to 99% of drivers…”

What? No, no, no—only bicyclists run STOP signs, ‘member?

Will they replace the asphalt with trees?

The best solution here would be the close the offramps and cover the Interstate. That’d actually help street safety in the area, help pedestrian access to the area, clean up the roads, and help flow on the interstate AND local roads.

Then if we could cover the interstate blight through Lloyd District that area of the city would absolutely boom! It would be a thriving, accessible, bikable, and could be absolutely beautiful.

Maybe, but won’t happen. Access to the Rose Quarter during Blazers games and big concerts and either arena is already awful.

Now we need to fix the intersection of Broadway and Vancouver (one block east of the afore mentioned intersection). Threading between 2 lanes of freeway entrance with lights is no fun.

Perhaps this is the time for Portland to drop the Broadway lanes from 3 to 1 going into downtown. Seems like the platinum bike city would want to give bikes more than a breakdown shoulder when cars have THREE lanes.