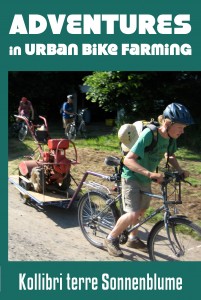 If you’ve lived in Portland long enough you’ve probably caught site of someone on a bike hauling yard and home improvement tools around. We have organizations that plant trees by bike, businesses that do landscaping and carpentry by bike, and we even have farmers who’ve replaced the iconic work-truck with a work-bike.

One of those farmers, Kollibri terre Sonnenblume, has now written a book about it. Adventures in Urban Bike Farming from Macska Moksha Press is what Sonnenblume calls, “Equal parts historical document, confessional memoir and social critique.”

Don’t let the title of the book fool you, based on an excerpt made available by the publisher Sonnenblume has just as many insights to share about Portland’s cultural upheaval in the past decade as he does about how to increase potato yields. “If you’re looking for a message of ‘rah rah, look how sustainable we are!’,” he says, “you won’t find it here.”

Sonnenblume moved to Portland in 2001 as an activist drawn to our town’s indy vibe, affordable housing, and reputation as “Little Beirut.” It was several years later that he found his place as an urban farmer. By the time he started Sunroot Gardens in 2007, Sonnenblume had already seen Portland change dramatically. But even so, his community supported agriculture business thrived. At its peak he and his crew cultivated 50 plots across three acres of urban land that provided food for over 24 households.

Sonnenblume and his bike were the toast of the local media — even as their coverage was a hint of what was to come: Portland Monthly magazine called him an “ecofreak” and “slightly insane.”

Then things started to change. In a very familiar story to those following Portland’s urban evolution. Here’s how Sonnenblume describes it in his introduction:

“The Portland that emerged next was “Portlandia,” a caricature of itself, a destination no longer for scrappy activists—or starving artist, their sometimes partners-in-crime—but for the app-driven digerati, with their oh-so-refined tastes and non-confrontational blue-state politics. Rents skyrocketed, hipsters pushed out hippies, and by 2015, Portland was the most quickly gentrifying city in the U.S.A. In short, no longer a hospitable place for unconventional experiments.”

Sonnenblume shut down Sunroot Gardens in 2010. By that time, he writes, “Urban farming as a meme had lost its luster and the practice itself had been relegated to the role of one more quirky thing that existed to ‘keep Portland weird.'”

Beyond the social critiques the book should serve as a great resource for anyone interested in urban, collective agriculture and its role in cities.

The book is available in paperback from Amazon or as a digital download (featuring 100 color photos) from Macska Moksha Press.

Having known Kollibri since summar of 2002 (but having lost track of him about the time he closed Sunroot Gardens), I look forward to reading this book.

Yes, that *is* Aaron’s trailer! I had forgotten that until another reader pointed it out to me yesterday. BTW, the Troybilt Tiller on the trailer weighed over 250 pounds. It was a real beast to haul by bicycle. We traded off that “honor” amongst ourselves. I only did it twice myself and needed a whole day to recover each time. On the cover, it is Tom Knaust doing the deed.

I look forward to reading the book Kollibri. I really enjoyed your article on gentrification and the photo collection from Olallie Lake. Cheers

Thanks, Patrick! Let me know what you think of it when you’ve read it!

Tom!!!! I was so sure that was him. For those interested, Tom is still living the dream, but over in Charleston, SC.

Most Portlanders I’ve talked to say Portland peaked in about 2006 or so. Some claim the hipsters ruined it, some say it was higher rents, smart-phones, over population, traffic, or gentrification. I even heard one guy claim that BSNY ruined it for him. Regardless, everbody seems to have become cynical and full of disdain and pretend the best times are behind the city. I haven’t even seen any high bikes the last few times I was there.

I’m not sure if I agree completely with the judgement that Portland is done as a Co-Op city, I think a good economic collapse could bring back the ideals that many Portlanders love about it. And at least it will always be a much better area than Beavertron for biking and living. But for a variety of reasons I moved to the Sandy area, bought a mountain bike(love Sandy Ridge!), started an organic garden, and will never move back. But look forward to checking out this book.

I agree that an economic collapse could certainly bring back many of the ideals that have been swept under the rug lately. As for Sandy, I spent a year farming out there and enjoyed things about the area for sure, especially compared to being in the city. Enjoy yourself and let me know what you think about the book!

When people say that Portland “peaked” in 2006 what do they mean?

Could it be that that was when they personally peaked, and now they’re more complacent and less likely to create things themselves?

I’ve been around since 1992 and I’ve always just seen it as a kick ass city with tons of good people, lots of bikes and tons of trees. And characters like Kollibri keepin it real.

And I think it will always be like that.