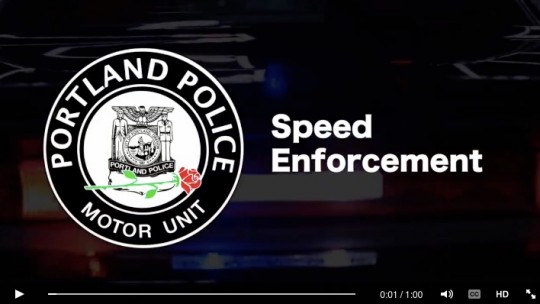 The Portland Police Bureau has released a new video that aims to explain why they do speed enforcement. Put simply, the video’s narrator Officer Ron Hoesly says, it’s because “speed kills.”

“We don’t do it to write tickets we don’t have a quota,” Officer Hoesly says in the short video just posted to the PPB’s Facebook page. “I’ve seen the results of speed and crashes. I’ve seen the destruction, I’ve seen the carnage from speed-involved crashes. They’re horrific events. I’ve seen bodies ripped apart.”

Hoesly is a veteran member of the bureau’s Traffic Division. Back in 2006 I joined him on a regular patrol and we did a speed enforcement mission on Highway 26 up by the Oregon Zoo. It was like shooting fish in a barrel the way he pulled over speeders one after another.

Of note with this video is that it’s clearly part of the Bureau of Transportation’s Vision Zero efforts. Back in August we reported how the PPB has also added language about their commitment to Vision Zero to all outgoing press releases.

Speed does not kill. Poor driving, recklessness, distraction, and poor decision making do.
If speed kills, everyone on the freeway would be dead.
Not sure what the point of this video is.

I suppose they could have said “excessive speed combined with poor driving, recklessness and poor decision making kills,” but it wouldn’t quite have the same punch.

A freeway is a totally different context. They’re designed to avoid any conflicts between motor vehicles and other modes, plus the speeds are so similar that unless you have a crossover head-on collision, there’s not much chance of fatality. On urban streets and highways, speed does kill, and it doesn’t need any such caveats.

If people drove slowly on freeways many of the thousands of deaths on freeways would be prevented.

Speed does kill, this is obvious – and even applies to being on a bicycle.

Look at the VZ map put out by PDOT and don’t have to look too hard to see that intersections at the bottom of hills are the biggest collectors of collisions in Portland. Though the map doesn’t show direction of travel by the cyclists, I’d bet dollars to donuts that at least 2/3 of those incidents are with riders coming down the hills. Pay particular attention to the one way traffic bridge collector streets and you’ll see exactly what I mean (Particularly NE Broadway/Weidler and SE Hawthorne/Madison and even SW Madison/Main).

Notice on Ankeny on the flats it’s relatively quiet, until you hit the hill at 13th west, CLinton 26th and 51st are the worst intersections. With few exceptions, bicycle collisions occur at the bottom of hills.

See for yourself, click the bicycle tab for bike only incidents.
http://map.visionzeroportland.com/

Speed kills, be it in a car or on a bike.

Unfortunately, I think the Portland biking community will always consider their right to bomb down hills to be a birthright…maybe we can convince ODOT to install bike ramps at the bottom of hills, so they can jump over traffic? E.P.I.C.

Um…you are clearly missing the point. Speed does kill.

Time to truly enforce the speed limit. No more gentlemens 10.

Unfortunately the Gentlemens 10 is interpreted as what ever the speed limit is +10 MPH. It should be what ever the speed limit is + 10%. This would mean a ticket for 27.5 in a 25 not 35.
As a motorist and a cyclist I have seen it first hand many times where speed killed. Fortunately I have always avoided the speeding suicidal motorist either as a motorist or a cyclist. In a few cases speeders have zeroed in on me as a target bit I was able to divert them from hitting me.

Even if they just pulled speeders over for 28 in a 25 and said “please slow down”, it would be an improvement. Police and other city vehicles operating at the posted speed would be nice too. But the Trimet bus… I know, I’m asking too much. What became of the mayor’s safety pledge?

This is pretty good. I would like to see more information about stopping distances. I feel they could use the neighborhood kid with a soccer ball example. Show how much further it takes a car to stop when it is going 30mph vs. 20mph. So many people in this city seem to think it is totally okay to go 30mph on neighborhood streets.

PNP
Reply to  Chris I

Great idea. I think most people have no idea what stopping distances really are, especially with so many people driving massive SUVs. I drive a sedan, but it’s one that’s heavy for its size, so distance between my car and whoever is ahead of me is always important. And of course, stopping distances is greater with higher speeds.

If you are speeding and you crash, it’s not an accident.

Koin: “Multnomah County Deputy District Attorney Laura Rowan wrote in a memo…the posted speed limited is 25 miles per hour. Friedow was traveling at 10 miles per hour and Angeles at 28 miles per hour, according to her memo.”

Dan A
Reply to  tnash

Interesting, I wonder how they determined that.

I wish they would focus their efforts not on the freeways and on the places where cars will interact with vulnerable users.

I got the impression from the video that collisions at speeds that tear apart bodies that were inside cars is very upsetting to the cops. Speeds that tear apart human bodies that were not inside the cars doesn’t hit them as hard. I suspect we’re looking at “us vs them”. Dismembered motorists are seen as “could have been me” by our local (car-bound) police. Dismembered pedestrians and cyclists, not so much.

We have a very long ways to go with our police if we are ever going to head in the general direction of vision zero, let alone get within a stone’s throw of it.