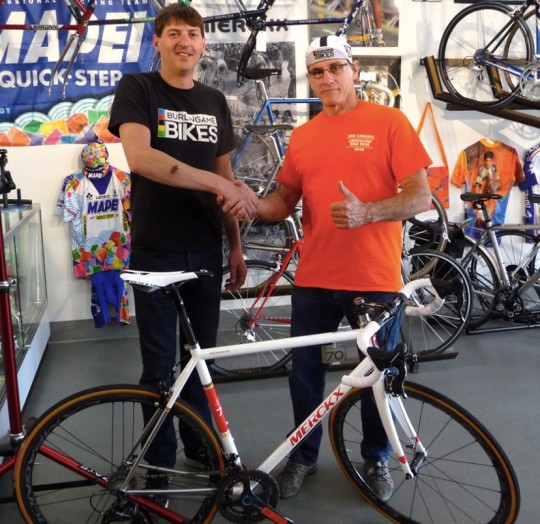 Road racing legend Eddy “The Cannibal” Merckx turned 70 this year. To mark the occasion he had 70 very special bikes made and offered them to his worldwide fan base at the cool price of $17,500 a piece.

Only 10 “Eddy 70” bikes have been sold in the United States and two of them ended up at Burlingame Bikes in southwest Portland. 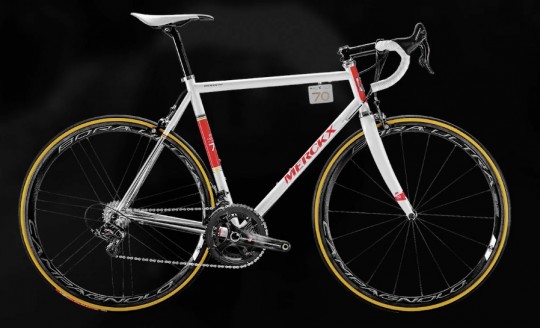 The shop was selected to assemble and deliver the bikes because they’re an Eddy Merckx Cycles dealer.

We heard the news from Glenn Vanselow, who owns Burlingame Bikes with his son Marc.

“We are proud to have these two fantastic bikes come through our shop,” Vanselow said. One of the two bikes, No. 31, was delivered to Jim Dillard of Sequim Washington last week. Dillard’s wife bought it for him as a birthday present. The other one, which is in the shop this week, is going to a cycling enthusiast and bike collector who lives in the Columbia River Gorge.

The bikes draw inspiration from ones used by Merckx during his heyday on the Faema team. They’re hand-built and painted in Belgium by Johan Vranckx, the man who has been Merckx’s personal builder since 1980. The frame material is Columbus XCr stainless steel with a carbon fork. The special edition drivetrain components are Campagnolo Super Record 11-speed adorned with the “Eddy 70” logo. Each bike is numbered and personally autographed by The Cannibal himself.

“This a cool tribute to Eddy Merckx,” Vanselow said, “and a pretty darn nice bike, too.”

How about a cool tribute to Eddy Merckx that is relevant to the other 99% of people?

How long before at least one of the two ends up next to Vera’s statue?

I’d rather have ten really nice bikes instead.

not even half the bike or half the price of the best bike ever!

If it’s fast enough to our run Twisted Sister you know you’re golden.

Better for the world and the user than a Ferrari.

Counting down to the first “no bike is worth that much” comment.

Also, Merckx and, yes, Campagnolo (fewer than 500 employees world wide) are small companies in countries (Belgium, Italy) that treat their employees better than many US majors. This bike is the sum of two family-owned companies–a long way from Apple, Nike, etc.

Yes it is a collector bike. I would bet it rides like a dream. The stainless alloy will give it a nice flex. I see the workmanship is up to par with my Mazi with Columbus tubing. Cannot see any welds either. It is worth it if you can afford it.

I wonder how he came up with that price? Seems kind of arbitrary.

I can get an Ahearne locally for what <$6K? And those have integrated racks and lights and stuff so you take care of business.

Who? Eddy Merckx?
Yeah, what does that guy know about bikes? Or selling bikes?

You are missing my point, davemess. I’m not disagreeing that he will (obviously) have no trouble selling all of those special edition bikes for that price (there is clearly no shortage of people with too much money). What I was hoping to explore was his choice of price point, because, as I was trying to suggest, skilled hand labor and good materials, not to mention useful product come in packages at ~1/3 that. The economics of this bike are, perhaps, more in the realm of artwork you hang on the wall, where the artist, assuming he is famous enough, can charge whatever the hell he wishes. For all I care, Eddy Merckx can charge $100,000 or $4,734.75 for his bikes, as long as we recognize that we’re in the realm of arbitrary price points.

I will say that although I think this kind of stunt is entertaining in the prurient way that certain categories of youtube videos of people performing incredible feats are amusing, the degree to which this bike reifies extreme (obscene?) wealth in our society I find troubling.

You guys are so right. I’ll bet Mr. DIllard’s wife is kicking herself right now for not buying him six fat bikes, one no-nonsense serious person’s commuter, a bakfiets and a sweet off road unicycle but I guess that what you get for not consulting internet comments first. Maybe next year, Jim!