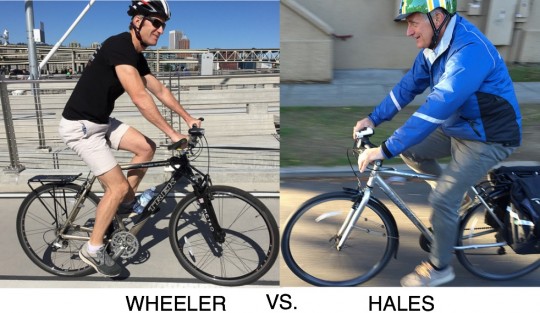 “If my presence in the race lights a fire under the mayor, how can that be anything but a good thing?”
— Ted Wheeler, candidate for mayor

Since Wheeler entered the mayoral race earlier this month Mayor Charlie Hales has been on a tear. From climate change to homelessness to bicycling, Hales has become more animated and action-oriented.

In a letter to Hales today, Wheeler all but accused the incumbent of copying his stance on issues and then challenged him to 12 “in-depth” debates.

“When I announced my candidacy for mayor,” Wheeler states in the letter, “I noted that our city had a homelessness crisis; last week, you declared it an emergency. Two weeks ago, I voiced my support for a gas tax; last Friday, you decided to agree.”

Wheeler has a point. And he could add bicycling to that list. Just a day after he announced his candidacy, Wheeler had an invite-only, sit-down meeting with a handful of bike advocates and experts to learn more about cycling in Portland. Meanwhile, Hales has upped his cycling and active transportation game significantly in the past month or so. Since he and Wheeler had that secret meeting on August 20th, Hales has shepherded major plans through city council and yesterday completed his fourth consecutive Monday morning commute by bike.

I met up with Wheeler before Sunday Parkways and asked him what he thought about all of Hales’ headline-grabbing actions since he jumped into the race. “I think democracy is a good thing and a healthy thing,” he said carefully, “and I think competition is good and healthy thing. If my presence in the race lights a fire under the mayor, how can that be anything but a good thing?”

With this letter (that the local media has quickly gobbled up), Wheeler wants to re-focus the city’s attention back on him. In his letter he says, “This campaign shouldn’t become a game of political tit for tat.” Instead, he wants to give voters, “an honest comparison” of he Hales’ ideas about 12 major issues with a separate debate for each. Here’s the list of issues:

When I see that list the first thing I think is how they are almost all connected. Seems like it’d be impossible to talk in-depth about one of them without four or five others coming up. For instance, how can you have a debate about “roads and infrastructure” and then a separate debate about “transportation and transit”? And isn’t transit just a form of transportation?

So far we haven’t heard a response from the Hales camp.

Stay tuned. This race is going to be very fun to watch.

Ted Wheeler doesn’t automatically get my vote just because he’s not Charlie Hales. I want to hear him convince me that he’s going to enact positive change, and not just talk about it. Part of that means lining up funding to pay for the things he wants, because that’s always what breaks down when people say good things—they say they can’t actually do those things because it’s not in the budget.

Lining up funding is nice, but having your priorities straight is just as good or better in my book.

We don’t need another red cent. All we need to do is stop spending it on cars-only nonsense (and I realize that I’m talking to some extent about funds that are collected and spent outside the jurisdiction we’re talking about here w/r/t the mayor’s race.

Looking at the choice of photos and the tone of the article, it appears that Jonathan has already endorsed Wheeler.

“And isn’t transit just a form of transportation?”

It’s as much a shaper of land use as it is a transportation mode. All of those lovely inner East Portland neighborhoods that are so great for cycling? They were built around Streetcar lines. If Ted wants to have a conversation with Charlie about the development potential of transit investments, I’ll be there with a big bowl of popcorn.

Transportation and land use are inseparable. That’s not exclusive to transit.

Can’t wait to watch these debates.

Remember when Hales hadn’t mentioned the word “bike?” Or remember years back when Clinton wasn’t even considered for diverters? It’s still quite vivid in my mind.

The potential for losing one’s job is motivating. We should periodically remind ourselves the person Hales was. Where would Portland be if he had done something all these years? I don’t know Wheeler well, but I also don’t know if I could bring myself to vote for Hales despite his new bike helmet. Best of luck to them both.

I am a Ted supporter at this point and definitely not a fan of Charlie but 12 is too many by about 8. Debates every two weeks for a sitting mayor is not realistic. But maybe Ted knows that and is starting his negotiation with a high #.

I’ll vote for whichever candidate says he’s going to close down streets to cars so that we can bike and walk without fear of bodily harm.

Which is just another way of saying I won’t be voting, because neither of these guys cares enough about the carnage on our streets to do something meaningful about it.

Bam! I am very much looking forward to these candidates articulating their respective visions for the PDX. The comparison will be interesting.

While it will be interesting to keep an eye on this campaign, I wouldn’t classify anything about electoral politics as “fun” anymore. Sorry.

Steve Duin is pretty ruthless on the subject today.

Thanks for the link…I went ahead and read Duin’s piece. I think his point that Hales hasn’t been a ‘strong’ type mayor is fair, though he puts it a different way that doesn’t seem quite fair. Can Wheeler be a stronger mayor? Hard to say at this point. Can Hales become a stronger and shrewder, more leadership oriented mayor than he’s been?

Interesting and a bit a transparently in favor of Wheeler, that bikeportland, in accompanying its story here with pictures of the two mayors facing head to head…clever gimmick that…uses a picture that shows Wheeler to be younger, or at least fitter (light clothes, bare legs, likely thinner waist.).

Wheeler being a challenger, means at this point, that he has no day to day responsibilities or decisions to make in terms of leading the city. All he’s got to do is talk convincingly about what he would do if he were in office; in other words, campaign. Wait until he gets into office, if he should happen to. Maybe debates are his game, and they aren’t Hales. Sometimes debates are good, sometimes they’re just wispy bits of dreams and promises presented to build enthusiasm, but unlikely to become reality.

So far, Wheeler hasn’t shown much indication that he could be a particularly strong type mayor. He can’t indicate promise of being a strong mayor, in presenting his ideas for what he thinks are important, only to turn around and complain when Hales takes action to demonstrate that similar things are important to him as well. Wheeler’s going to have to do something to set his skills and potential apart from Hale’s. Maybe he thinks a big series of debates is his ace.

“So far, Wheeler hasn’t shown much indication that he could be a particularly strong type mayor.”

Well Wheeler had no trouble coming out strongly against the CRC. Remember that?
http://www.oregonlive.com/news/oregonian/steve_duin/index.ssf/2013/03/ted_wheeler_weighs_in_on_the_c.html

Wheeler’s campaign website, in the “priorities” list, makes no mention of bicycles. It does mention fixing potholes and traffic congestion.

There is no “fixing” congestion. There is only adding lanes, increasing pollution, traffic, fatalities…etc. The only solution is less cars on the road. Period.

If there are alternative modes available, congestion will self-regulate.

Would you say Sweden has pretty awesome transport options? Until they introduced congestion pricing, cars clogged the highways.Jonas Eliasson: How to solve traffic jams | TED …
http://www.ted.com/talks/hans_rosling_shows_the_best_stats_you_ve_ever_seen?language=en

As long as cars are the cheapest, easiest and most subsidized mode, they will continue to clog and damage highways.

While Wheeler has plenty of his own dough, I noticed he’s getting financial support from the likes of the Portland Spirit owner…what’s his name?? Not a big supporter of trails or transportation options from what I’ve seen.
Watch out!

The same Portland spririt which attempted to mow down flugtag attenders because it was their “right”?

Learn about maritime law and ship piloting before you talk about what you do not understand.