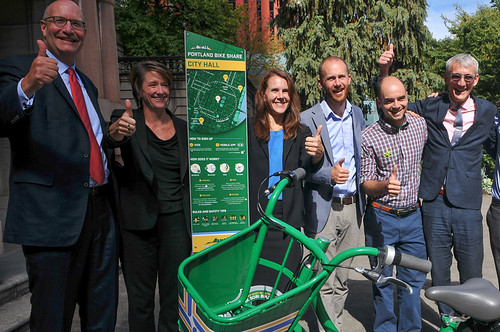 Portland’s remarkable (unprecedented?) streak of good biking news continued today with a press conference in front of City Hall to mark the passage of a plan to finally make Portland Bike Share a reality.

Four of our five City Council members were on hand (Amanda Fritz was not there) as well as a Metro Councilor, the president and CEO of the company that will run the system, the CEO of the company supplying the bikes, and lots of Bureau of Transportation staff. 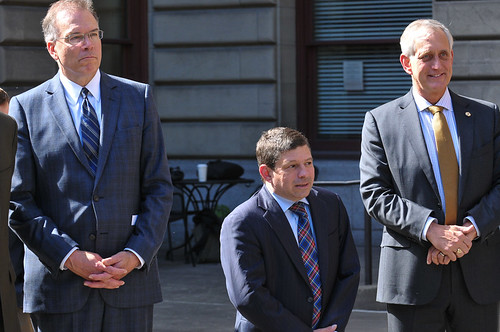 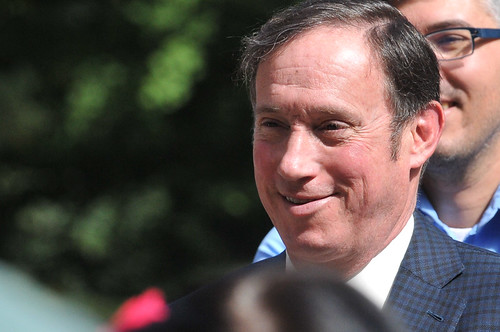 For Commissioner Dan Saltzman, who missed yesterday’s vote at council, this (huge for him) smile looked a lot like support. 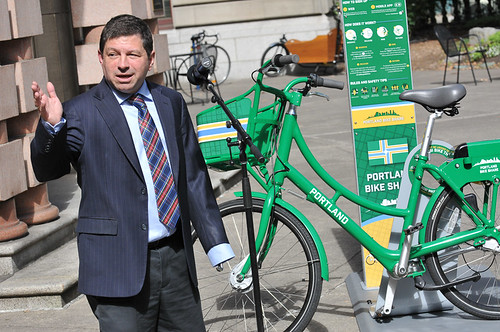 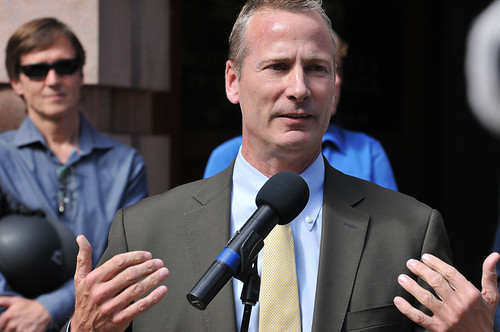 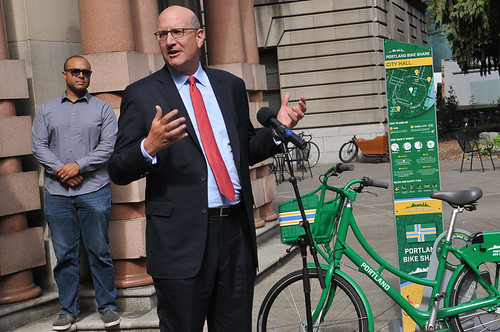 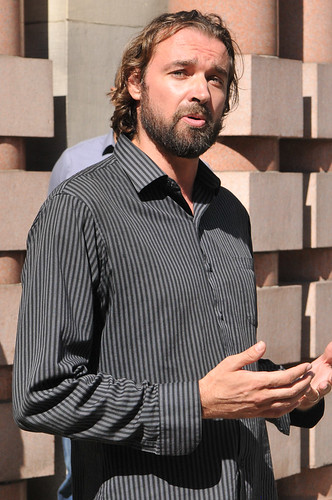 Social Bicycles CEO Ryan Rzepecki said his company felt a responsibility to deliver, “The best
bike share system for the best biking city in the country.”

Mayor Charlie Hales kicked off the event by recalling the days when streetcar, the Aerial Tram, and the Airport MAX line opened.

“When you think about the incredible bike culture that’s already here, I think will take bike share to a whole other level.”
— Jay Walder, CEO of Motivate

Portland first started planning for bike share in 2006 and began the quest in earnest in 2009. Suffice it to say it has been a long haul. The grueling march toward today’s celebration started with a completely different team at the helm. The first push for bike share began with the previous City Hall administration and the PBOT leadership who carried it across the finish line today were not around at all when the idea first gained steam.

But those memories are fading fast in light of the large upswell of political support Portland Bike Share now enjoys just a day after it sailed through City Council by a vote of 4-0 (Commissioner Dan Saltzman’s absence prevented the clean 5-0 vote but he was there today in what felt like an implicit sign of support). While just the 65th city to get such a system, Portland has managed to do it in a way that feels like it just might have been worth the wait. 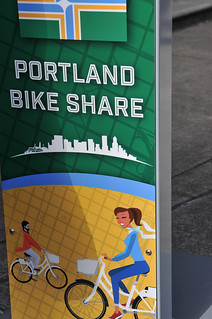 PBOT Commissioner Steve Novick, who seemed happier and even more jocular than usual during his remarks, said he’s bullish on bike share because more cycling will help Portland combat “climate disruption and rising health care costs” which he characterized as “two of the greatest threats we face as a city, as a state, and as a nation.”

We might be the top biking city in the country, Novick added, but, “We haven’t had a major weapon in our arsenal. We haven’t had bike share.”

The “smart bike” system that will be deployed in Portland by next summer is a perfect fit for our existing bicycling culture and infrastructure, said Jay Walder, president and CEO of Motivate. “When you think about the incredible bike culture that’s already here,” he said, “I think will take bike share to a whole other level.” Walder also spoke of how PBOT has his “full support” to make our system the greenest and most accessible system in the nation. He told the crowd Motivate will ensure there are “no barriers” for anyone who wants to use Portland Bike Share or who wants to be employed by it.

Following the short speeches Mayor Hales snapped on a Nutcase helmet and spun one of the bikes around the block. 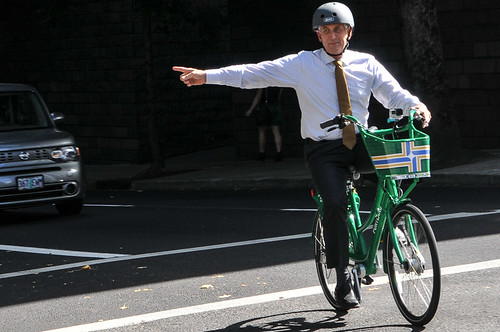 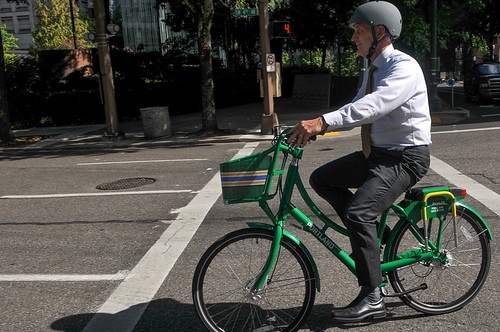 When he got back I asked how he plans to use the bike share. Here’s what he said…

I can only assume this will increase mode share for bikes even higher than our current 7%. Great job everyone, and I look forward to becoming a member and rider!

Hopefully with this, the bike counts on the tilikum bridge, and some diverters on Clinton, new greenways and other diverters, etc, we can get the mode share above 10%. That would be a huge milestone, and would help build momentum even faster!

Call me the Grinch, but I’m not excited about this. Once the honeymoon is over, I don’t think this is going to increase trips by bicycle. It will probably that business away from businesses that rent bike to tourists. It seems the latest big budget gimmick in hopes of making Portland sexy again. You know what would help move people around downtown? Bringing back Fareless Square.

A couple square miles of free bus routes isn’t going to help our transportation system. A bike share probably will. Go and visit some other cities that have a well established bike share system and you’ll see first hand that it works wonders when combined with public transportation.

I think your optimism is misguided, but I could be wrong.

It will be used by more than just tourists. I live and work in the city. I would love to ride a bike, but have nowhere at my house to securely store one, so I won’t buy one. When bike share is implemented I see myself, and others like me, using it to run errands or get to work.

It could also be the easy solution to people that think they might like commuting via bike, but that aren’t ready to invest in a bike. It really lowers the barriers to trying it out.

If you have never used bike share or been to a city with it, it may seem like its waste. Use it or see it in use and you get it. Seriously, light bulb moment.

As to the big budget part, I find people VASTLY under-estimate the cost of things they like or accept VASTLY over-estimate the cost of things things don’t like or accept. The $1.5 million for bike share is about 5/8 a mile of new road construction (2 lane with curb/gutter)or 1.3 miles of mill & overlay with curb & gutter repairs. Recently I designed a 95 lot parking lot that had an estimated cost of $765,000. So $1.5 million for bike share… pretty dang cheap.

Yep. Well, the feds are mostly paying for it…so it’s a no brainer. Portland has little disposable income left..and is sort of stuck begging the feds and the state for cash. They would have never funded this themselves.

It’ll be an interesting experiment, bike share. A couple million bucks for system like what’s proposed, isn’t a lot of money. It’s a decent gamble.

The range of physical condition of different types of people that may be regularly riding the bikes in cities that already have a system, doesn’t seem to be something that’s known with any certainty. Should the bikes turn out to be used mainly by fit, regularly bike riding people that don’t want to bring their own bikes downtown, and by tourists, that doesn’t seem like a great need.

For people of a wide range of physical types and condition for bike riding, that find themselves obliged to drive regularly, bike share for them, somehow reducing their need to drive, may be one of if not the greatest success bike share in Portland could hope for.

I used the DC bikeshare, and found it quite useful.

Went to DC recently for a conference. Managed to convince a number of distinctly non-cycling coworkers to give it a go. It was amazing. They were going on their own as it was so much easier than transit for quick trips. And then we biked to all the monuments together…something you couldn’t really do on foot.

Everybody had a great time, and it was cheaper than day-passes on public transit. Everybody wins!

The only concern I have about Bikeshare PDX is the question: Who is responsible during times the bike is locked up? The vendor? The customer who last used the bike? Their credit card?
What is considered satisfactory as far as relieving me of responsibility for securing the bike? PDX constructed bike racks? A sign post? A tree?
The attraction for bicyclists who currently own bikes is the following:
Bike is unlocked, ridden, re-locked and forgotten.
I can feel comfortable doing that at a station (as in Washington D.C.) but any other arrangement, not so much.

I’ll consider bike share to be a reality when I see bikes at bike stations. I’ll consider it to be successful once I start seeing the bikes regularly in use.

So…where’s Mia Birk in all this?

Well, as CEO of Alta Planning and Design – a company that has zero ties to this project – she no longer has any official role.

Oh yeah, I forgot Alta failed in this whole endeavor. Still thought it was her work that lead to this, but you’re right. Ultimately, she had nothing to do with it.

The real proof is when the rain comes. Nobody carries a towel in their daily life and doesn’t want to show up with a wet posterior to a meeting. Will the main stations feature a nice canopy to keep the bikes dry? Hmmm…..

I am a huge supporter…and it’s surprising the city never offered a share program to let people buy into it in a meaningful way other than a disposable pass system.

Let’s hope people use this…even in the rain.