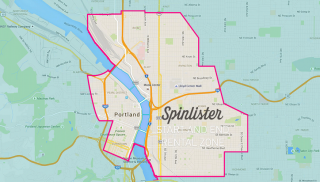 A possible initial service area for Spinlister, included in
its new web survey. The company added that it expects
the zone to grow.

The company planning to bring a private, free-floating bike sharing service to Portland is asking for input.

In a short web survey launched this month, Spinlister asks Portland residents how often they’d expect to rent bikes using the proposed Smart Bikes service, what they’d pay, how far they’d walk to reach the closest bike and what service area they’d like to see.

“We’re not doing this for fun or verification of a system already created to make them feel good,” Spinlister chief marketing officer Andrew Batey said in an email about the survey. “We’re building the platform to allow for variable business rules – which allows us to make fast and systemwide changes to various inputs (price, geo-fence, payment structures, support, etc.).”

In other words, Portland wouldn’t just be Spinlister’s test market for the launch. The company will keep being able to experiment with its business model after its launch.

“For instance, we expect the zone to grow, but we need to understand the market and usage dynamics before scaling it entirely across Portland at once,” Batey said.

Spinlister’s business model, currently backed by venture capital, is unique. It has said it expects to ship branded bikes to selected Portlanders who would then essentially become owners of their own fleets of smart bikes, with a share of the revenue going back to Spinlister.

Last week, Batey told us that Spinlister could launch in Portland immediately but hasn’t fully staffed up yet as it gathers market information like this. It’s happening as the city simultaneously considers a public bike share system that would use both smart bikes (of a different brand) and fixed stations. Portland City Council will decide tomorrow whether to sign a contract for its system to launch next July.

Spinlister’s survey took me about 10 minutes; after completing it, you can choose to enter in a prize drawing.

When I think fleet of rental bikes, I think tourists blocking up bike paths worse than weekend warriors in lycra at the first good weather weekend of the year.

Doesn’t seem like something residents would often use. Does smart bikes mean e-bikes? I might pay for one if I was sick or injured? Wanted to travel across the hill to Justin Bieberton?

They’re not e-bikes, just bikes that can talk to nearby smartphones using Bluetooth. You’d use them the same way you’d use any bike sharing system, presumably: as part of a multimodal trip where you didn’t bring your own bike, or for recreation when you don’t have a bike of your own on hand.

Oh I like to see them using it, less enthused to see groups of confused people with their bikes angled sideways across the path, trying to reach consensus about where to go next. It’s okay though I’ll ride on the grass

As someone who’s 6’4″ and travels a bunch, I’ve used spinlister in a few cities to find a bike that fits me, is well cared for by its private owner, and it’s even come with some advice on what to see and to avoid. I’m planning to list one of my bikes, and I hope to see this model/service scale widely!

Splinsters is going to provide the bikes for this program so it’s different from what they have done elsewhere.

This is an interesting concept and a great example of the “sharing economy”. Here are some of my thoughts:

It seems like Spinlister is asking for a heavy lift from it’s listers. Listers have to essentially pay for the bike (over time), and take care of coordinating, relocating, and repairing the bikes as well.

The proposed service area is a great.

The survey seems to suggest they are leaning towards a $5/hour price point. This is higher than the proposed price for Portland’s other potential bike share system, and twice the cost of a 2.5 hr TriMet ticket.

How would Spinlister deal with bike theft? What about liability issues (say a wheel falls off a bike and the user gets hurt and sues, is the lister liable?)

I’ll be interested to see if the competition makes the program(s) stronger, or if they split the market such that neither can achieve critical mass.

Worthless. Everyone in that zone drives BMWs.

So untrue, what about the Teslas, Outbacks, and Prii?

Me
Reply to  WAR

No BMWs on my block/ or anywhere near my house and I live in this zone.

I’m in this zone. My building has 8 parking spaces for 60 units, and street parking is not free. While 2 of the cars *are* BMWs, The vast majority of us are car free.

I’m extremely disappointed in the types of bikes they apparently plan on using for this service. Bike share programs in other cities almost exclusively use upright, step-through bikes (usually with a basket in front) because this is the type of bike frame most easily and comfortably ridden by all demographics. Little old lady with weak hips? Young adult male with neck problems? College kid who’s never ridden a bike that wasn’t an upright Huffy from Walmart? Woman with heavy purse who doesn’t want to ride with it dangling from her shoulder? Middle-aged man who’s admittedly overweight, in poor shape, and not very flexible? Tourist family with older children who want an easy way to hop around downtown and inner NE/SE without renting a car or waiting on public transit? These are whom the traditional “shopping bike” is made for: everyone and anyone, regardless of physical condition or cycling experience.

And yet, according to the video in the survey and the post on BP a few months back, Spinlister plans on using a more “traditional” diamond-frame lean-over type model with–at best–a tiny, shallow pan for a “basket.” Bike share is a great way to bring the “interested but concerned” crowd into cycling for transportation by overcoming the big hurdle of having to shop for and purchase a personal bike (that’s how a lot of people I knew in Chicago got into cycling). Providing them with bicycles that are NOT universally easy and comfortable to ride is not the way to do this. If Spinlister can’t get this basic point of bike share right, I’m wondering what else they’re going to overlook.

Yeah I has a similar thought, wondering how they were going to get enough variation in bike size out there. The other bikes you described don’t have that much problem. You simply adjust the seat and go.

Looking at the map, it seems they are excluding portions of PSU and areas right up against 405. That’s kind of interesting.

Souh waterfront and the new Tillikum bridge (why did they name it after the whale that Sea World tortured and drove to kill humans?) also notably absent.

My only question is why did I have to turn the volume up for that video??

I usually get around this just by directly telling the renter they can return the next day at no extra charge, and just make the reservation for one day. Spinlister thinks the bike is returned on time but both the renter and I know the truth. Haven’t had any issues yet.

Their zone is pretty close to the same zone as the cities proposed zones.

Problem is the city has the upper hand, since they could legally pull the rug out from under Spinlister at anytime -(and sorta has hinted at it).

A few weeks ago I would have given Spinster the advantage with the bluetooth flexibility advantage, but the city system with the political backing will make it almost impossible for there to be any real competition – especially since the cities system is (or could be) just as flexible.

Portland has sure taken care of that last-mile problem. That first mile needs some work.