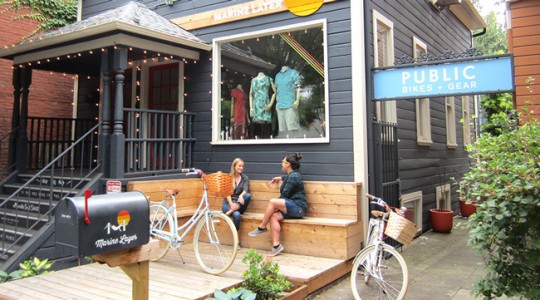 PUBLIC Bikes, a San Francisco-based brand launched in 2010 by Rob Forbes (of Design Within Reach fame), will open a showroom in Portland tomorrow. Their new space (shared with an apparel company) is tucked inside an old commercially-zoned Victorian on the hot retail strip of NW 23rd street.

This is the company’s first retail space to open outside of the Bay Area and it’s another example that — despite our stagnation on the political and infrastructure front — Portland remains an epicenter of bicycle industry talent and bike-related economic development.

Check out PUBLIC’s announcement below for more info on the space and what to expect:


We’re elated to announce that we’re coming to Portland. The first-ever PUBLIC Showroom is opening Friday, June 12 in Northwest Portland inside a beautiful old Victorian building at 828 NW 23rd Ave, shared with our friends, Marine Layer.

Marine Layer is an apparel company known for impeccable style. With their absurdly soft shirts and our ridiculously smooth riding bikes, laid back Portland just got even more comfortable.

Our PUBLIC Portland Showroom (entrance above) will feature our entire collection of PUBLIC bikes for test riding where we can place an order for you to ship directly to your home or work. Plus, our friendly staff will help you customize your dream bike with their expert knowledge of our bike accessories. During the summer months we’ll be open 11am-7pm everyday.

With the opening of our PUBLIC Portland Showroom there are now two options for purchasing a PUBLIC bike in Portland. You can still purchase a PUBLIC bike from Crank, our excellent bicycle shop dealer across the river in Southeast Portland. Crank carries many PUBLIC bikes in stock and offers PUBLIC bikes at the same price as us. We recommend Crank to service your PUBLIC bike and you can rent a bike from them as well. 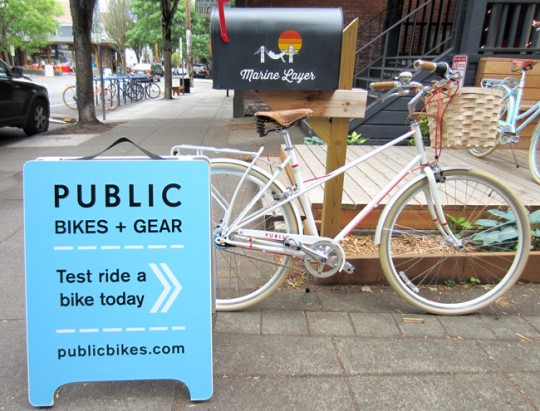 The number one reason we want to be in Portland is simple, we want to be part of the city that consistently ranks #1 or near the top of every list of top bicycle-friendly cities. These days, 6% of Portland residents regularly bike.

More reasons why we are pumped to be in Portland include the personal and professional connections we have to the city. Several PUBLIC staff members hail from Portland. We’ve juried at the Oregon Manifest (shot above) where the country’s best custom bicycle builders team up with top-notch design firms to collaborate on envisioning and designing the ultimate “utility bike.” Many of our vendor partners and friends are based in Portland, including Nutcase and Portland Design Works. And local groups and blogs, including Bicycle Transportation Alliance, BikePortland, and SHIFT serve as effective advocates, organizers, and resources about livable streets and celebrating bicycle culture.

Also, Portland’s indie bike building community leads the US and the world. The leading industry technical school, Urban Bicycle Institute, has a campus in Portland and has trained some of the best people in the industry. There are 40+ amazing custom bicycle builders based in Portland, including the well-known and well-loved Tony Pereira, Sweetpea and Vanilla. Chris King Precision Components (shot above from our 2014 tour of Chris King) hails from Portland and has an international reputation for their locally manufactured gear.

Portland has made us believe that American cities can become just as bike and pedestrian friendly as our favorite cities in Europe. We look forward to joining Portland’s diverse community to inspire new people to think differently about how they can use a bike more in their everyday life.e commute to work, making it the leader out of all major US cities. Interestingly, the 2000 Census found only 1.8% of the city rode a bike to work, so Portland’s huge growth in bike commuting is inspiring. Another fun fact is the percentage of bike commuters per capita in Portland is twice as high as San Francisco’s and 10x the national average.

Good luck! And Welcome to town.

They call it a temporary showroom in their craigslist job ad. I’d be curious what they’re thinking in that respect, if you get the chance to ask.

May become permanent:
“Depending on the success of our showroom, we may choose to extend the length of our presence in Portland,”

Their permanent one will be wheelchair accessible?

No it isn’t, there’s been a shop in Seattle for several months.

Nice! I’ve always recommended Public bikes to people who ask me what to get as their first bike. They have some nice, simple and affordable designs. And they’re one of the few companies that will sell you a 1×7 drivetrain, which I’m a big fan of for cost and simplicity reasons.

Oh, they must have us confused with a different city…

Are you being sarcastic? I’ve found Portland to be a very cyclist-friendly city.

For a moment I thought you were going to demand Public to build protected bike lanes leading to all their shops.

So. They don’t stock the bikes in Portland, but their local dealer, Crank, does. Why then have an order shipped in a box, partly assembled, when they could refer the sale to Crank, where it’s already assembled and tuned? The only logical reason is to cut the local shop out of the sale. The customer is better served by buying from Crank or by buying a brand that supports rather than competes with its dealers.

Good grief NW 23rd? That street blows. But good luck to the shop.

I concur that Crank is the right place to buy a Public. http://www.crankpdx.com

I bought a Public to serve as my limited use townie. I loved it so much that I commute with it almost everyday from St Johns. Never had a problem. I got it at Crank who were fantastic!

I was thinking the same thing. What’s the point in sticking a bike shop on a street where biking is dangerous (doesn’t even include a bike lane) and an overwhelming majority of those who frequent that street or location do it via a car.

Are you sure? As a work destination, NW 23rd actually has the highest bike-commuting rate in the city, higher than the Pearl or downtown or the central east side. I’d be surprised if customer ratios were that different. I’m certain it also has one of the highest walking mode shares of any commercial area in the city.

The curbs of the area are crowded with cars, but that’s because it’s very dense, parking is free and most of the buildings were built without parking of their own. (Which is, of course, why so much density is possible.)