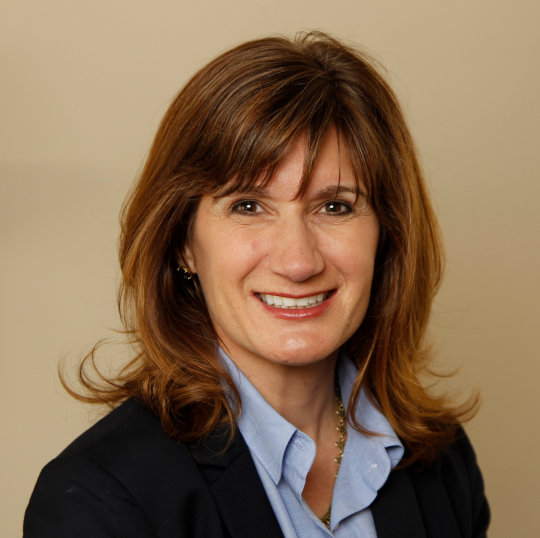 Lininger says she had “a number of conversations”
with ODOT’s new regional manager about safety
improvements on Barbur.
(Photo via Oregon Legislature)

When the Oregon Department of Transportation announced on Tuesday that it had decided to change course and formally consider a road diet on Southwest Barbur, its news release included two words that hadn’t been associated with the issue before:

The state representative appointed last year to represent much of Southwest Portland and her hometown of Lake Oswego, Lininger was quoted by ODOT itself as favoring “improving safety for all users on this crucial roadway.”

Though she’s only one of many people who’ve contacted ODOT in support of low-cost, short-term improvements to Southwest Barbur — multiple sources said that U.S. Rep. Earl Blumenauer has expressed his opinion, not to mention Portland Transportation Commissioner Steve Novick and hundreds of local residents and organizations — Lininger is one of a few who’ve done so from a position few people have: direct authority over ODOT, thanks to her seat in the state legislature.

“People in the Portland part of the district have expressed a lot of interest in improving safety for bikes and pedestrians. I think it’s really important for us to do this.”
— Ann Lininger, Oregon State Representative

Lininger and others, in turn, credited ODOT regional manager Rian Windsheimer with both the suggestion and the final decision to conduct a road safety audit of Barbur that would include consideration of a road diet. Windsheimer, like Lininger, came into his current job last year — in his case being promoted to replace the departed Region 1 Manager Jason Tell.

Previously a Clackamas County Commissioner for four years, the Lininger, a Democrat, was appointed to the legislature in January 2014 to replace resigning legislator Chris Garrett. Last November, she was elected without opposition to a full second term.

And somewhere along the way, Lininger said in an interview this week, she developed a clear sense of the transportational desires of Southwest Portlanders.

“People in the Portland part of the district have expressed a lot of interest in improving safety for bikes and pedestrians,” Lininger said. “I think it’s really important for us to do this, and part of the community where people walk and bike a lot.”

After Windsheimer became ODOT’s Portland interim regional manager last August, Lininger (who had previously served with him a Metro policy committee) called him up to discuss active transportation improvements in Southwest Portland.

“I’m going to have to hand it to Rian — his team did a great job of identifying the project. They came up with this suggestion.”
— state Rep. Ann Lininger on ODOT regional manager Rian Windsheimer

It was the first of “a number of conversations,” Lininger said. Those culminated in a sit-down meeting in Salem on April 22 between Lininger and Windsheimer, also including staffers from the offices of state Sen. Richard Devlin and state Rep. Margaret Doherty, whose districts sit just southwest on Barbur.

The idea of a Barbur road safety audit came in part out of those conversations, ODOT spokesman Don Hamilton said this week.

“Certainly we always listen when legislators start describing things that they hear that are wrong on the roads,” Hamilton said.

Lininger praised Windsheimer and his colleagues for trying to find “a cost-efficient way we can get to making bike and pedestrian improvements.” 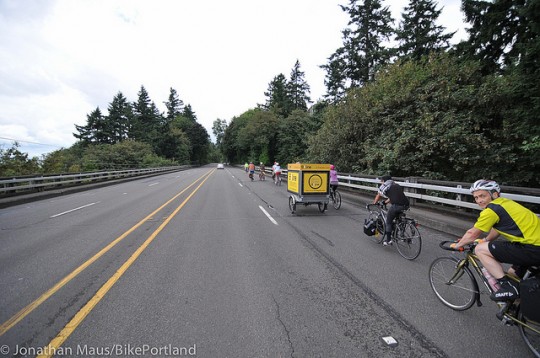 An organized ride on Barbur in 2013.
(Photo: J.Maus/BikePortland)

“I’m going to have to hand it to Rian — his team did a great job of identifying the project,” she said. “Short of doing something that requires hundreds of millions of dollars today, what are the things we could do today, this year, to start improving safety? … They came up with this suggestion.”

The safety audit will open the door to possible safety improvements not just on the much-discussed wooded section of Barbur just south of downtown Portland but on the commercial section to its south as far southeast as its intersection with Capitol Highway.

“I’m hoping that it will be a conversation about a huge chunk of Barbur and not just limited to a part that has received a lot of attention in the past,” Lininger said.

I believe the vast majority of lives lost on Barbur have been people in cars or on motorcycles. This is not just about improvements for pedestrians or improvements for bikes. Barbur is a detriment to the entire community as it stands, and all it needs is paint and signage.

I hope Ann understands that.

“a position few people have: direct authority over ODOT, thanks to her seat in the state legislature.”

Funny, I always imagined that we as taxpayers and citizens had direct authority over ODOT. Guess not.
But very glad to see Ms. Lininger stepping into this fracas with authority apparently ODOT recognizes.

Well, everyone knows those damn bikers don’t pay any taxes…

all it needs is paint and signage

Wrong. We need fully protected bike lanes. Paint is not going to stop someone from driving too fast around a curve and swerving into the bike lane.

You’ve got to pick your battles. Lower (enforced) speeds will make our roads safer for everyone. Stubbornly demanding miles of special infrastructure won’t get us anywhere, and it definitely won’t get us closer to vision zero.

demanding miles of special infrastructure won’t get us anywhere

Go ask The Netherlands how that special infrastructure is working out. It certainly got them somewhere.

Ah, but you must be realistic, Adam H. You see, ODOT has already blown $200M to study the, what was it called? Oh, right. The Columbia River Crossing. See, there’s no money left for bike infrastructure.
Sorry.

Of course the infrastructure itself would get us somewhere. I think Scott’s point is that the demand for it, in the current reality, likely won’t get us anywhere.

That kind of attitude is how Portland got complacent with bike infra. Either demand what works, or don’t even bother.

“I believe the vast majority of lives lost on Barbur have been people in cars or on motorcycles. …” Scott H

Late night-early morning closing time excessive speeders, rather than the vast majority of people using the road. For normal driving, nothing much wrong with the road really. Neighborhoods adjacent to the road would probably enjoy a quieter environment that would result if the road’s posted speed limit were dropped considerably.

Give the road a road diet to provide presently lacking road space for continuous bike lanes across the two bridges, and people wishing to bike in Barbur’s congested, smoggy motor vehicle environment will have a little less stress and danger across those two points on the road.

I’m glad someone with power is finally lighting a fire under ODOT’s ass. Anything less than fully protected bike lanes on Barbur is negligent.

You will never see protected lanes on Barbur and as a commuting cyclist, I would not want them.
The roadway barely gets swept now, protected lanes in the woods there would be constantly filled with crap.

It is a bike lane…
If you worry about cars running off the road and running into you, I would stay on your couch…
The bike lane on Barbur is fine, I know no one who actually rides on Barbur who thinks it is scary or more unsafe than any other road.
It has no intersections for a 2 mile stretch, so is safer if you ask me than most neighborhood streets.

Possible, although PBOT has a sweeper for that specific purpose. If jurisdiction were transferred, it’s possible they would use it on protected bike lanes where a standard width sweeper would not fit.

The warning lights that detect cyclists seem to work quite well on full sized bikes, but I don’t know how well they work with the BMX’s or the skate boards. I use either Barbur or Terwilliger either direction. Speaking of narrow bike lanes much of Terwilliger northbound is less than 2 feet. I feel better on Barbur than Terwilliger. Fewer patients and handicapped vans on Barbur.

Dream bigger, sir/madam! The primary benefit of protected bike lanes on Barbur would not be for the relatively small number of people who bike on Barbur now – it would be for the much larger number of people who would bike if comfortable infrastructure were installed on the most direct route to their destinations. Those people would gain great health benefits from biking.

The debris in Southwest is certainly an issue. It would require regular maintenance and we should demand that as part of a protected-bike-lane solution.

She needs to be advocating for city-wide improvements of ODOT roads, not just Barbur.

If she has the influence, where’s the results?

“She needs to be advocating for city-wide improvements of ODOT roads, not just Barbur.”

It’s her responsibility to advocate for her constituents, who are not city-wide.

“If she has the influence, where’s the results?”

Isn’t that what this entire article is about?

I thought the ODOT position certainly had jurisdiction beyond her district. Am I mistaken?

Never mind. I was under the impression she was more important than just a regional spokesperson. It’s important she’s speaking up, but this probably won’t do much. ODOT needs a total shakedown and reappointing of officials that have vision zero as the prime directive.

Without a gas tax increase there is very limited ability to do anything to make improvements to any elements of the transportation system. Even renewing the paint on the roads, replacing signs that fade in the weather, and power for traffic signals cost more every year.

Even if we never expand another road for autos, we need lots more money. Increase the gas tax, only then we can expect to see some results. Until then, it’s fighting over the crumbs.

The problem is, they won’t use the money for bike anything if they get the money with their current political climate. This pressure to change the narrative in the organization is important.

…Good news for once, what with all these crashes and pedalcyclist deaths on the City roadways.

I commute every day from NE Portland to the Wash Square area on Barbur.
It is an easy and pretty safe commute. The transition to Naitto coming home is a nightmare and needs a bunch of paint and signs but the bike lane and travel on Barbur is as safe as any high speed road as there are no crossings to worry about. The bridges are not a problem, there is rarely a car on them at the same time I am.
If you worry about getting struck in a bike lane, I would suggest you not ride a bike in Portland.
Barbur needs a few more signs maybe and a big fix at the Naitto transition but other than that, it is a flat easy way to get to the West suburbs from the East side of Portland.
The Rep should talk to bike commuters who actually ride on Barbur for proposed fixes……

No, primarily, the Rep should talk to people who *don’t* ride on Barbur because it scares them. The health benefits of biking over not biking are so great (much greater than the risk of traffic collisions) that, although reducing the instance and severity of traffic collisions is imporant, the #1 public health benefit of good bike infrastructure is to get more people on bikes.

I would ride it more with lower traffic speed and more bike space, continuous across the bridges please.