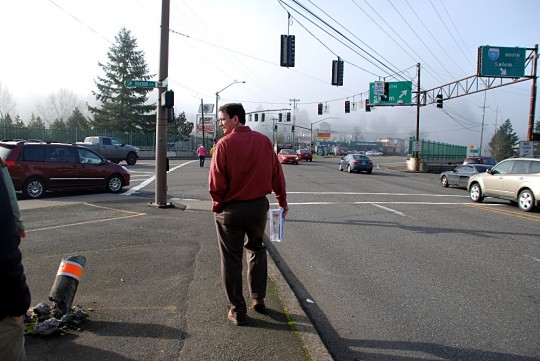 Under a bill due for its first reading in Salem this afternoon, the state of Oregon would create a new task force to “examine strategies to reduce and eliminate traffic crashes … by a specific target date.”

House Bill 2736 would be “kind of the first step in the conversation” about a statewide Vision Zero policy, Bicycle Transportation Alliance Director Rob Sadowsky said in an interview Wednesday.

In addition to the Oregon Department of Transportation, the task force will include representatives of the Oregon Health Authority and State Police.

“It’s not completely bypassing, but it’s taking the step of getting the legislature actively engaged on Vision Zero, not waiting for ODOT to come up with a policy,” Sadowsky added, referring to the Oregon Department of Transportation.

Sadowsky said his biking advocacy group, working in partnership with its counterparts at Oregon Walks, have been pursuing such a bill for a while.

“We didn’t know until this morning whether ODOT was going to stand aside,” Sadowsky said. “If it’s gotten this far, we believe that they’re at least standing and letting it pass.”

The task force would prepare a report to an interim committee of the state legislature by September 2016.

Other groups and interests to be represented on the committee: people with disabilities, seniors, freight carriers, passenger cars, transit providers, people walking, people biking, people of color, the Federal Highway Administration, the governor and two people “who have knowledge of Vision Zero policies.”

HB 2736 wasn’t always intended to cover Vision Zero; when it was first introduced it was intended to study speed bump height and markings. But because the deadline for introducing a bill has passed, the Vision Zero text was inserted using a method referred to as “gut-and-replace.”

Sadowsky said that ODOT’s top safety executive Troy Costales, who has in the past “been reluctant to use the words Vision Zero,” seemed to be more open to the concept.

“Instead of deaths, he’d rather talk about the number of days where they don’t have fatalities,” Sadowsky said. “In return, we’ve said ‘OK, give us Vision 365.'”

But a meeting this morning, Sadowsky said, “was the first time I ever heard [ODOT Director] Matt Garrett and Troy Costales openly talking about vision zero as inevitable.”

“we believe that they’re [ODOT] at least standing and letting it pass.”

But a meeting this morning, Sadowsky said, “was the first time I ever heard [ODOT Director] Matt Garrett and Troy Costales openly talking about vision zero as inevitable.”

Glad to hear the BTA and friends are making this happen. If we lead eventually the leaders will follow, eh?

It’s high time we get a state-wide bill to mandate infrastructure to protect everyone, not just people driving. Hoping this passes and results in more protected bike lanes.

* As long as it doesn’t take away existing car parking spots in the public right of way or impact private SOV operators to drive at any speed they wish.

“Instead of deaths, he’d rather talk about the number of days where they don’t have fatalities,”

I would like some day to hear Mr. Costales’ explanation of this stance. Vision Zero has coherence; is being pursued in quite a few cities and countries around the world, can point to impressive results. It is I think a more serious approach to the worldwide scourge of death-by-automobile than anything I’ve seen otherwise, and certainly than what ODOT has cooked up, so for ODOT to object, suggest they’d rather take their own approach is rather bold—not to say self-important—since they have no coherent strategy, plan, or approach that I’m aware of, nor have they shown much in the way of results.

Andyc of Linnton
Reply to  9watts

Yep. It kinda makes one feel like they don’t really care, doesn’t it? At least that’s how it sounds to my ears.

9watts
Reply to  Andyc of Linnton

I know that to me it sounds like dissembling; like what we tend to hear from ODOT: Lots of words, but no compassion, no soul, no humility at past failures, no willingness to try something new, no commitment to much besides (more) asphalt and (more) cars.

Must be nice to collect a paycheck and not have to do any real work. All Matt and Troy have to do is appear once in a while and say look, we had a day when no one died? Really, that’s living the dream right there.

Likely because it sounds better and easily obfuscates data. Days without a fatality doesn’t include crashes that cause serious injuries not resulting in death. Nor does it say anything about the frequency and total amount of deaths. 200 non-consecutive fatality-free-days is nice and all, but what happened on those other 165 days? ODOT doesn’t want you to know.

If anyone knows traffic victims or families/friends of traffic victims willing to gather together and start speaking up from our perspectives that we are unwilling any longer to tolerate the indifference to the deaths and injuries by automobiles, please have them contact Oregon Walks, the BTA, or me, at finnekk@comcast.net. We are trying to get something started like New York City’s Families for Safe Streets.

Good for you, Kristi! I hope you report back here on how this goes.

Keep applying pressure until you see the policy in action on the ground. I have my doubts they are actually acquiescing more than just acting like they are to get things to die down so they can resume the status quo.

Keep putting pressure on ODOT to achieve vision zero, even AFTER it’s implemented. This is an ongoing battle. ODOT needs to realize this, and we need to make them know it if they keep acting like it doesn’t matter.

There must be something in the air bc this morning I started work on a Vision Zero PAC. https://twitter.com/visionzeropac

Our focus is on sending the message to politicians that victim-blaming and dragging their feet on safety is unacceptable. I was surprised to see there is not already a more policy-oriented PAC.

Our website isn’t up yet but I think our message will be lightning clear, especially once we’ve turned a few elections.

Keep at it Chris! In fact EVERYONE needs to keep at it until ODOT has the concept firmly imprinted in the way they do business. Kind of makes me think that fuel taxes should be based on the same rule as most of the European countries have. If the retail price is $3.00 then the tax should be $3.00 for a $6.00 total.

Except money isn’t our chief problem. We have plenty of money; just no good plan for how to spend it in the twilight hours of automobility. Once we retire the compulsion to spread asphalt everywhere—widen freeways, raise bridges so bigger trucks can zoom under them, dredge harbors so even bigger ships can dock—we’ll discover that we have plenty of money to fix what we have, invite everyone who’s been shoved off ours streets for the better part of a century back into the mix by reinventing our public thoroughfares as places for everyone, not just the auto-mobile.

I’m a little concerned about how they are going about this, particularly their inclusion of *crashes* in the Vision Zero concept.

One example automated red light cameras. These may increase some type of rear end crashes, but they reduce T-bone crashes, which are far more likely to be deadly.

Lets focus the attention on fatalities and a serious injuries, an embrace low-speed fender benders that may be necessary for us to get reach our vision zero goal.