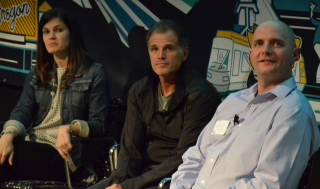 The user-owned bike share system due to launch in Portland in September says that participants won’t have to pump the tires in any bikes shared on their network.

That was one of several tidbits shared Thursday by the CEO of Spinlister, the Santa Monica-based peer-to-peer platform that is planning a first-of-its-kind bike sharing pilot program in Portland.

As BikePortland reported in March, Spinlister says it will buy a line of custom “Smart Bikes,” give them to selected Portlanders for free, and let them float freely around the Portland area like so many car2gos.

Anyone with a smartphone will be able to rent these bicycles, Spinlister says, and any revenue will be split 50/50 between Spinlister and the Smart Bike’s owner until Spinlister has paid off the bike’s initial cost.

After that, Spinlister has said it will pocket only 17.5 percent of the rental revenue — but Spinlister CEO Marcelo Loureiro suggested Thursday that this will be enough for the company to hire local contractors to provide basic maintenance for any bikes in its system. 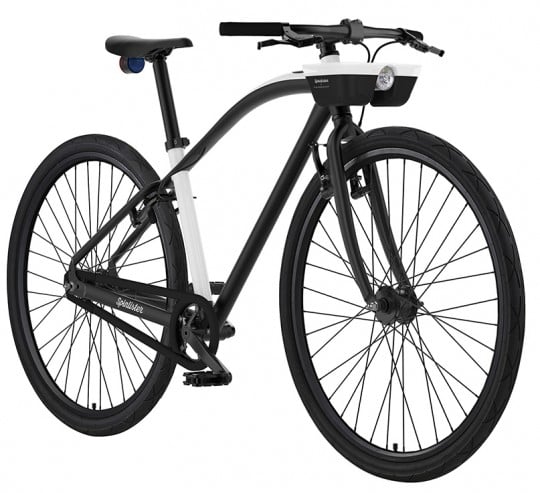 A Spinlister image of one of their branded shared bikes, built by Vanmoof and to be owned by individuals.

Loureiro’s remarks came at the end of a panel about the sharing economy at Portland’s annual Tech Fest Northwest conference.

Speaking before a crowd of maybe 150, Loureiro was candid about the fact that the concept might or might not work.

“If it’s going to be good or not, I have no idea,” Loureiro said. “We have a great belief in the idea.”

The Brazil-born entrepreneur said the company he took charge of in 2013 is “here in Portland because this is where we have the best-engaged community.”

Choosing its listers carefully is key to Spinlister’s business model. “The shady listers, they don’t respond to emails,” he said.

Loureiro also said that instead of buying an insurance policy to back its novel business model, it is self-insured. Spinlister promises to fulfill any bike damaged, lost or stolen during one of its rentals for up to $10,000 in value, he said. 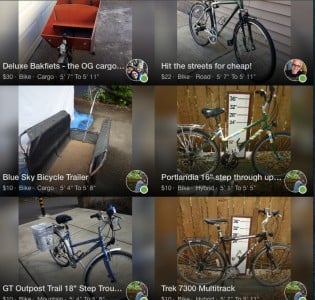 “Everyone worries about the risk,” Loureiro said. “We are taking the risk.”

Another detail: Spinlister’s Smart Bike owners will be in charge of “rebalancing” their own bikes, as the phrase goes in the bike share business. They’ll get mobile alerts to warn them if a bike has been dropped in an odd location and isn’t being used.

“If you want your bike to keep making money, it’s up to you,” Loureiro said.

Finally, in response to a question from Malia Spencer of the Portland Business Journal, Loureiro explained his company’s plan for addressing another seeming challenge for the Smart Bike system: theft.

Spinlister bikes, Loureiro said, will have electronic tracking devices in their tubes, presumably able to share their location via wireless signals to passing smartphones.

“The bike’s going to be stolen for sure,” he said. “But we’re going to get the bikes back. After a certain number of times, you will stop stealing these bikes.”

Spinlister’s plan is daring. And if it works, it could indeed be transformative. It’s also gaining momentum and positive headlines at a time when the City of Portland’s own bike share effort continues to lag. It will be interesting to see if this “smart bike” approach is able to get up and running before PBOT’s system.

There are some really interesting ideas here, but I don’t understand who the anticipated market is for this program. I get Car2Go, because the cost of car ownership is so high. Is there a market for bike-borrowing based on the same concept? It seems to me like the barriers to bike ownership are lower than those involved in using a scheme like this. What am I missing?

Same benefit as bike-share. Not all trips are out & back. Asymmetrical trips make sense to use a bike for part if you can take 1-way trips.

Yes…rebalancing could become quite a chore. I would need a bike trailer for my bike.

The whole theft piece of the equation still doesn’t make sense to me…maybe why they’re giving free bikes to early adopters, because it’s just really hard for me to see how that will work / how these bikes won’t end up in the East Side chop shops.

Since when did sharing become a money maker.

If I share something with someone, they get it free of charge.

By this new definition of “share”, Hertz and Avis are part of the “sharing economy”.

If you get paid for it you aren’t sharing.

My landlord “shares” his apartment with me!

Do you know how many people are trying to make a living off of uber, buying a car to provide rides to paying customers???

This stopped being sharing a long time ago.

No he rents you an empty unit, unless you are living in “his” apartment and not paying rent.

Do you really not see the difference?

Buying something with express interest of renting it out (Hertz) vs. renting out something you own for personal usage when it isn’t in use (GetAround). Seems clear to me.

Of course there is a difference… but that doesn’t make one into an example of “sharing.”

with you on that. renting is renting.

No fenders? In Portland?!?

Novel idea. I hope it succeeds. Some thoughts:

1. Self-insured: does this cover liability if the renter injures themselves or others on the bike? Is that covered under real liability insurance?

2. Self-rebalancing: this seems onerous considering if a bike is far from home, the amount of time and potentially gas/transit costs to retrieve the bike and move.

What is stopping someone from just taking a bike share bike and keeping it in their home, using it as their own bike, locking with their own lock, etc.? The tracking data would still show that the bike is moving around town and in use.

I’m going to rent these and leave them in goofy parts of town, where’s there no GPS or cell signal and what signal there is bounces all around, so the owners will never find them. Washington Park lower Max station, anyone?

OK, I’m kidding, but what’s to stop this kind of foolishness?

Want to stop the wireless signals? Remove the seat post and fill the frame tubes up with water. Most frequencies don’t travel through water very well, even if the electronics survive the drenching.

I’m skeptical that the “electronic tracking devices” in the frame tubes will work well or for long or have any anti-theft effect.

Powered by a battery, signal weakened by being encased in aluminum tubes – seems like the range will be short and the working life will be short, assuming the device is even powered on when the bike is stolen.

What are the chances that a smartphone (1) passing close by the bike chop shops (2) will have the appropriate app running (to report the signal) and (3) is owned by the right person (someone who will bother calling the police), (4) during the weeks or days – or more likely minutes – that a stolen Spinlister bike’s tracking device will be functioning? And then (5) what are the chances that the police will do anything about it?

I don’t understand how this works.

Suppose I need a bike to get from my house to downtown this afternoon. Would I rent a Spinlister bike for that?. How long does it take for me to find and rent a bike, how much does it cost, what do I do with the bike when I get there?

Or is Spinlister meant for renting a bike for days or weeks, instead of minutes?.

Currently you rent someone’s personal bike for a day or more. This new system will have the special GPS equipped bikes parked around town locked to PDX staple racks. You find the closest one, unlock it with the app, ride it to your destination and lock it to a staple rack. I’m guessing prices will be comparable to bikeshare systems. A couple bucks for an hour or $5 to $10 for 90 minutes.