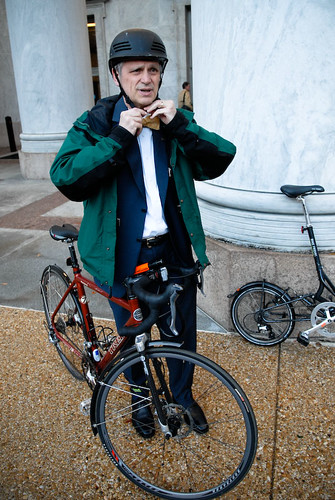 Blumenauer would like to be safer on the road.
(Photo: J. Maus/BikePortland)

On the same week that the nation’s bike advocates roll onto Capitol Hill for the National Bike Summit, U.S. House Representatives Earl Blumenauer (D-OR) and Vern Buchanan (R-FL) have introduced the Vision Zero Act of 2015 (H.R. 1274).

The bill would set aside grants worth $30 million for cities to plan and implement road safety projects.

In a statement, Blumenauer’s office said the bill is a recognition that “communities across the country are recognizing that there is only one number of acceptable deaths on our streets: zero.” The goal of the legislation is ambitious: “eliminating all transportation-related fatalities, including pedestrians, bicyclists, transit users, motorists and passengers.”

Blumenauer and Buchanan are co-chairs of the Congressional Bike Caucus.

The Vision Zero Act creates two new US Department of Transportation grant programs. One sets aside $5 million a year for communities to develop Vision Zero plans, the other grant will award five communities a share of $25 million to implement their plans.

While this is federal legislation, Portland’s Bureau of Transportation Director Leah Treat is already showing her support. Treat, fresh off testifying in front of lawmakers in Salem yesterday for the first time in support of a speed camera bill, said in the official statement, “People of all ages and abilities deserve safe streets that support multimodal uses. We appreciate Congress’ support to help cities across the country develop and implement comprehensive safety programs that will not only save lives, but add to the resiliency of the urban environment.”

To learn more about H.R. 1247 and track its progress, visit Congress.gov.

Three cheers for Blumenauer! Maybe this kind of push (from Congress and AAA(!) no less) is just what ODOT needs to get with the program.

And notice he didn’t say “I just wanted to start a conversation.” 🙂

Awesome! Please send some of that money home!

Is it hopeful or merely ironic that the bill’s other sponsor is from Florida?

Because the greater Portland metro area far exceeds any greater metro area in Florida regarding commuter and/or enthusiast worthiness? That aside, cycling needs significant buy-in from all parts of the country to advance the industry and promote cause at the national level.

No, because Florida is the deadliest place to bike and walk. I guess they need more help, so maybe they should get the funding?

Florida transportation and officials are well aware of their poor track record on safety. I don’t see it as ironic that they are taking a leadership position – I see it as appropriate and responsible.

Florida DOT isn’t taking any sort of leadership position, but a Congressman from FL is. It’s great to see some bipartisanship. Hopefully FL DOT will enter the 20th century….

Florida DOT and FHWA are in fact investing lots of resources into improving pedestrian and bicycle safety in Florida.

That’s great to hear! I lived in various parts of FL for 45 years, moving here in 2010. There’s so much potential there….

I’ve become accustomed to ignoring national politics and supporting the city policies most of my life. Now, it’s difficult to say this, but our city leadership sucks. Perhaps the only way we can get safe streets in is to lobby our national congress?

Thirty million dollars spread across 50 states, distributed among interested communities, and further reduced by administrative and reporting requirements will produce nothing meaningful by way of implementation. It looks like just enough money to keep grant writers and planners busy with little actual effect on traffic and pedestrian safety. It’s hardly worth the bother.

It says that “5 communities will be awarded the share of $25 million” That’s a pretty good chunk of change to put towards a plan on a community level.

If the money was simply spent on robot photo radar that would result in hundreds of municipalities getting dozens of devices, each, that would immediately save lives (as well as improve livability)

While the $-amount isn’t exactly mind-blowing, I think the symbolic value of such an initiative could pay greater dividends than the actual cash. If—and it’s a huge if—ODOT treated this as inspiration, cover, whatever and got over its hangup about Vision Zero I’d consider the effort successful, even if Oregon didn’t see a red cent.

I agree. It’s such a paltry sum that it’s almost an insult.

Trying to keep the cynicism in check here… driving at or below the posted speed limit would be a good start. Let’s see what the response to the speed camera bill is, and whether it gets a 5 out of 6 thumbs up. Especially once they start handing out tickets.

While the $-amount isn’t exactly mind-blowing, I think the symbolic value of such an initiative could pay greater dividends than the cash. If—and it’s a huge if—ODOT treated this as inspiration, cover, whatever, and got over its hangup about Vision Zero I’d consider the effort successful, even if Oregon didn’t see a red cent.

Good to see that this bill is bipartisan in nature, and hopefully it’s seed to produce greater fruit. I agree that the dollar amount is 1/10 of a drop in the bucket, but you have to start somewhere.

Our police department just received a grant from (state) funding similar to this. They are doing a few free bike training classes, but most of the stipulation of the grant specifies that it is primarily for crosswalk stings. A good start for us, but hopefully this money will go towards a breadth of solutions.

Not sure why people knocking the amount.

First it is better than nothing. When dealing with the Fed.s it’s usually an all or nothing situation, and this is just the first round. If proven to be successful, future funding will likely increase- dramatically.

It’s enough to seed some decent projects, but not enough to matter much to the financial slash and burn budget types in Washington.

And second many projects like these are funded from national, state, and local agencies.

The difference between a 3 million dollar project and 8 million dollar (with 5 from the feds, assuming that the $25m is split evenly) project is a pretty significant difference. One in which a project goes from spray painted bikes on a road shoulder (excuse me) I mean bike lane, to one with buffers.

@Earl Blumenauer I will vote for you every time sir. Thanks you for all you have done for cycling.

I like how you ride a Trek Portland btw.