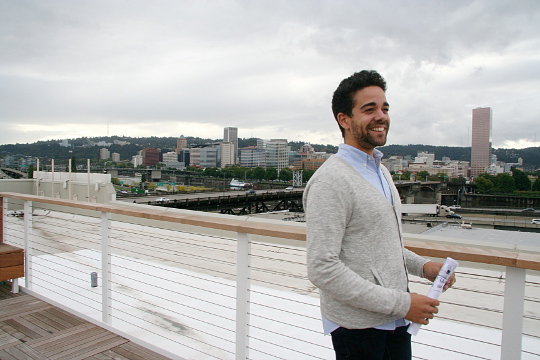 Leonard Barrett of Beam Development atop an eastside office building remodeled in 2013 that now houses 350 workers. In 2005, Beam had planned to demolish it for a parking lot, but high biking and transit use changed the owner’s mind.
(Photo: M.Andersen/BikePortland)

While the organization that says it speaks for local business interests continues to oppose major investments in biking, walking and mass transit, actual local businesses are continuing their embrace of the amenities we’ve built so far.

Hillsboro-based Lattice Semiconductor said this week that it’s sold its Hillsboro headquarters and is moving 100 executive and administrative workers to U.S. Bancorp Tower in downtown Portland. The Oregonian described it as part of a “tectonic shift in Oregon technology” that is channeling tech jobs to the central city rather than Washington County.

Meanwhile, just across the river, Beam Development owner Brad Malsin told the Portland Tribune this week how unexpectedly high bike and transit use convinced him to scrap his plan to demolish the 90-year-old Convention Plaza and make room for a parking lot.

Instead, as we reported in 2013, Malsin’s company has remodeled the building at 123 NE 3rd Ave., now known as the Eastside Exchange, to house 350 jobs. The on-site parking lot has only 126 spaces for cars.

“Originally, I wanted to tear the Convention Plaza down to create parking I thought the (Burnside Bridgehead) project needed,” Malsin told the Tribune. “But over the years, I learned the people who want to work in the district support bikes and transit. That made saving the building viable, and it was the key to the new project.”

Then there’s this, from the Tribune article:

Much has changed over the past 10 or so years. Back then, the city council thought a big-box store was necessary to revitalize the neighborhood by attracting suburban shoppers. Now the inner east side already is one of the fastest growing parts of the city.

Times certainly have changed. But The Oregonian’s piece about the Lattice relocation from Hillsboro includes a reminder that central-city job growth and low-car commuting aren’t actually new trends. They’re returns to the way things were before the mid-20th century.

Washington County has been the state’s main tech hub since the 1950s, when Tektronix moved from Southeast Portland to new offices near Beaverton.

Tek spun off generations of other companies, among them Planar Systems, Floating Point Systems, Cascade Microtech and Merix Corp. – most of which also found offices west of Portland. Intel picked Washington County for its Oregon outpost and a successsion of other manufacturing outposts did, too.

Now if only the building they’re moving into could get that bike parking right, we’d be all set.

A lot of these new jobs are being filled by transplants from California. Now is the time to reconfigure our streets and properly price parking, lest we let them think that they can transplant their California car culture with them.

“lest we let them think that they can transplant their California car culture with them”
exactly!!!! we must price car parking everywhere (on street and surface lots) at its true market rate. It is pure insanity to have so much asphalt just holding private property for free or “virtually free”.

Just think about how much rain runoff would occur if 1/2 of car parking was bioswales? I think we’d have two fewer big pipes in Portland.

If business leaders are touting bikes and transit, how come the word “bike” seems to have been censored out of our mayor’s vocabulary?

Great question Anne! I ask myself that same thing several times a week it seems.

What I was most struck by this week is that Lattice sold its 194,620 sq ft Washington County headquarters for $15.15 million, or $78 a sq ft. Meanwhile, an office building in the Pearl was just sold for $500 a sq ft (http://bit.ly/1LtRReP). The two buildings aren’t totally comparable, one having been built in 1990, the other in 2011; one is being vacated, the other one has the Federal Government as a tenant. However, I can’t help but notice that the building that commands a huge premium is the one without any off street parking, located a couple blocks from the streetcar, with sharrows painted on the street it faces.

Nor is this a Portland phenomenon. There have been a number of articles recently about jobs flocking form the ‘burbs into downtown Seattle (Weyerhaeuser), Chicago (Walgreens, Sara Lee, United Airlines), and others. Sad that our current mayor and council can’t seem to see past the cars when it’s the bike, ped, and transit infrastructure that is powering downtown and the inner neighborhoods.

“California car culture”? Berkeley, San Francisco and Los Angeles, California are making huge strides in bicycle improvement, while Portland stagnates. Car culture is not unique to California, and Portland did not invent bicycle culture. Perhaps Portlanders need to be a little less parochial and complacent. Blaming your troubles on incomers is an old, established and rather hypocritical human behavior. I know of several communities that have been more revitalized than hurt by an infusion of new blood, new ideas and new energy.

I disagree with your assertion that there is no such thing as California car culture. I believe

Where does most of CA have to go but up? Tell me how bad Portland is doing when SF or LA is at 6% average bike commute share.

How are Portland businesses letting the Portland Business Alliance get away with opposing popular trends like biking, walking, and public transit??

Vote Up0Vote Down  Reply
« Ask BikePortland: Is it legal to ride with my dog?
Comment of the Week: The challenge of speaking up as a woman who bikes »