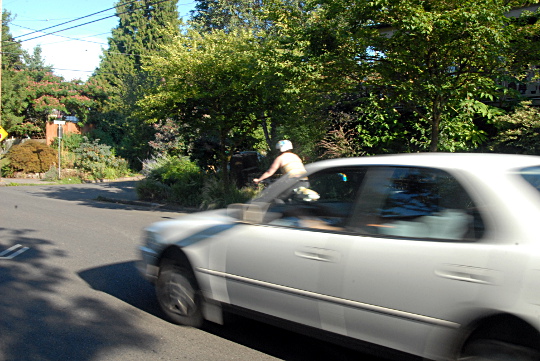 As we wrote beneath the last Comment of the Week post, BikePortland has decided to be the only blog we’re aware of that pays for great comments. The person whose thoughts we select for this feature gets a crisp $5 bill in the mail, as a way for us to appreciate the site’s amazing discussion community. So watch your email — we might be in touch.

Street safety matters to cities. So does street comfort. But only one of those issues will land you in court.

That’s the insight shared this week by BikePortland reader paikiala, responding to the discussion on Wednesday’s post about a guerrilla traffic diverter installed on Clinton by anonymous activists.

Paikiala, who often weighs in with thoughts about a city’s perspective, was responding to another reader who asked why “safety issues” stemming from Clinton’s high auto traffic hasn’t awoken the city’s fear of a lawsuit.

You’ll need to clarify what the safety issues are, or perhaps you mean the fear of safety issues? There is no need to worry, because frequently the City is sued regardless of the events of a collision simply because of the deep pockets and distribution of responsibilities that typically result from trials. This is also why the City, prudently, negotiates settlements to avoid going to trial. That said, much of PBOT’s efforts go into making roads safer.

‘Safety’ is a subjective word. In the last ten years there have been twelve reported bike involved crashes on Clinton between 12th and 50th, representing 12% of the reported crashes. Of those 12, 7 (58%) were blamed on motorist errors while 5 (42%) were blamed on cyclist errors – all crashes involved injury to cyclists.

Clinton has been retrofitted more than once (three times in the last 20 years) to alter the patterns and behavior of users. This process is happening all over the city on an annual basis where problems are occuring as resources permit. Citizens of portland see their local street or commute problems, while City workers see the problems of the City as a whole. The perspective is different.

What guidance are you citing? If you mean the most recently adopted ideal plan, true. But most streets fail to meet new policy every time new policy is adopted. It takes time to massage current systems into the new paradigm.

Lastly, regardless of those that say ‘do both’, daily PBOT front line staff is faced with choices. Say you’ve got $80k today to do what you want with for traffic safety in Portland. Do you add 2-5 diverters on a single greenway (that’s not so bad), or do you add one rapid flash beacon ped crossing (without refuge island) on a busy road in east Portland? You choose, and be prepared to defend your choice in court.

America’s tradition of litigation has been a huge shaping force behind the scenes of our society. Sometimes that’s for the better and sometimes it’s not. But as the bicycle advocacy priorities in this country have shifted further from safety and closer to comfort, it’s clear that there are some things litigation may no longer be able to help with.

Having worked in finance for the State of NH, I can back up the deep pockets claims. The state would get sued for various thing relating to traffic, weather, street conditions, inmates, etc. Depending on the particular case, you would see certain policies or even legislation come out to mitigate future instances.
People have a tendency to look at things that are self serving to their particular needs, forgetting that a government entity has many constituents it has to please. Not all of them bike on Clinton. Often in government decisions it truly is the “squeaky wheel that get’s the grease”. If the city has 200 cycles complaining about Clinton, but 1,000 about a safer pedestrian crossing, guess which is going to get done first.

“…Often in government decisions it truly is the “squeaky wheel that get’s the grease”. If the city has 200 cycles complaining about Clinton, but 1,000 about a safer pedestrian crossing, guess which is going to get done first.” Peter R

What your example suggests, sounds much more like greater need, than squeaky wheel. Reverse the numbers, and level of vulnerability of respective user, and the response would likely be the concerns of the people riding being given higher priority.

I think Paikiala’s comment reflects that he or she has got the general idea of difference in perspective that citizens and city officials and staffers have about improvements made to and maintenance of roads and streets. If citizens want changes from the standard way the city goes about doing things, they’ve got to somehow put a strong and convincing argument before the city, so it’s their item that can receive the higher priority.

As an example of “distribution of responsibility,” I once was a juror on a wrongful death suit involving crash of a motor vehicle. (Definitely not an accident, JM!) We found plaintiff 51% responsible and defendant 49% responsible.

Oregon has a comparative negligence standard, which is why such things matter. Because the facts and circumstances were so mixed this was a case that had to go to trial. I think our jury did a good job.

But do avoid trial if at all possible!

Yes, that is the reality. Far more people are injured or killed as pedestrians or in motor vehicles, than on bicycles, in Portland. All of them could potentially sue the city. So from a legal risk point of view, fixing the problems on Clinton probably ranks pretty low as a priority. Improving bike infrastructure is a public policy issue – the familiar issues of urban planning, public health, sustainable city, quality of life – far more than it is a public liability issue.

Start with the basics such as monitoring Clinton for safety. Yesterday I observed cars traveling on Clinton at a high rate of speed.

that isn’t statistics, that’s your personall anecdote. I’ve ridden on Clinton twice a day, every work day, for the past 5 years….and sorry, I really haven’t noticed that much of a problem. I see far more cyclists behaving badly than people in cars. but again, just anecdotes…

Steve Fritz and his companion die on I-5 due to a pickup crossing the median; one month later, Matt Garrett finds $7M for an emergency extension of the cable barrier that has been erected down the median for much of the rest of the freeway.

So you’re implying that we need a body to get something done?

Not quite. It must be someone who was in a car.

It appears to me that nearly all vehicular injuries result from illegal operation of a vehicle. However, enforcement is weak to non-existent for many of the things that can injure a cyclist.

For example: the paint is worn off the bike lane marking by vehicles crossing into the bike lane, but no one has ever been ticket for driving in the bike lane. If I get hit in the bike lane, can I sue the city for failure to uphold the laws that are intended to protect me? The guy that actually hit me likely drove off and doesn’t have insurance even if they do investigate and catch them>

The only time I have ever seen or heard of this law being enforced is as the fallback citation when field sobriety tests fail to produce an arrest for DUII.

cars don’t run ppl down, ppl run people down, seems almost everyone that cuts thru the street drives like a mad person…

Really? I’m having a hard time remembering the last time a ppl—not in a car—ran down someone else down.

you get the idea…