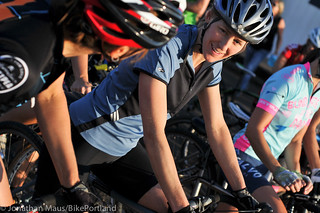 What happened when Rebecca lined up
for her first race?
(Photos by J. Maus/BikePortland)

I never intended to do a cyclocross race.

I’d been to a race before, several years ago when a roommate was competing at Barton Park. But the actual racing part of the affair was entirely lost on me as I happily settled into what I assumed was the True Meaning of Cyclocross: drinking beer under a tent, with the faint sound of cowbells clanging in the distance and the occasional blur of muddy spandex warriors providing momentary yet unimportant distractions from the rotation of hot dogs on the grill.

Racing myself seemed entirely out of the question. My position in the bicycle world has always been firmly ensconced in the advocacy and bike-fun camps. My bike-related skills consist of dressing up like David Bowie for Pedalpalooza and sending indignant tweets to @PBOTinfo about drivers parked in the bike lane.

But then this beautiful new bicycle came into my life: a Creamsicle-colored All-City Macho Man with disc brakes and internal top tube cable routing, built for adventure. The first day I rode it to the office, my boss (and avid racer) Todd took one look and said, “Oh, you got a cross bike!”

No. This was a gravel bike, I explained, designed for touring the off-road Oregon Outback or perhaps hauling disco balls to a Rocky Butte Sunset Dance Party.

“But you should try a cross race!”

I solemnly shook my head. But after a steady peppering of encouraging suggestions over the course of the next three months, the conversation evolved from “NopeNopeNope” to “But I don’t know how to jump over a barrier…” to “Just one race.”

Fast forward to the first Wednesday night of Blind Date cyclocross series at the Alpenrose Dairy. Someone had to tell me to take the water bottle cages off my frame and I’m feeling conspicuously amateur in shorts and my lucky green sparkle t-shirt, but the lycra catsuit-clad racers aren’t throwing me any shade about it. There’s a supportive air of patient understanding – like when your cousin shows up to the wedding wearing a “Who Farted?” T-shirt and no one says anything because, hey, it’s his best shirt and it looks like he even ironed it. You get some points for trying.

Portland Bicycle Studios hosted a pre-race event for noobs and I gratefully joined in. Serious Racers Suzanne and Alexandra began by teaching us how to dismount and hop barriers before realizing that there were other fundamental skills we lacked, such as how to pin our race numbers onto our shirts.

The Beginners Women (all 13 of us) line up at the start, some smiley and nervous, some with game-on faces. I see sweet carbon fiber-ish frames, some mountain bikes, even one lady who was out to kill it on a commuter with a rear rack. The women look a lot less like the Mad Max gangs I’d envisioned. I adore all of them instantly and hope I can pass them.

Some signal is given and then everything starts moving in fast and slow motion simultaneously. The fading autumn sunlight strikes the dust cloud and soaks every angle in a Kodachrome filter. Who is in my group? Who am I racing against? I have no idea. Every distinct thought melts into a puddle of crayons. The reptilian core of my brain starts rapid-firing commands that skip my mind and shoot straight to my muscles. I feel but don’t think: 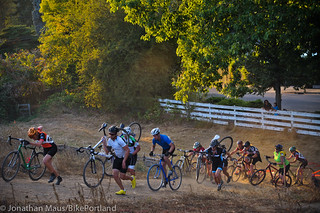 We lap the course again and again. I’ve never moved for so long with so much intensity in my life and I feel like throwing up. Do I have to get off my bike for that or could I keep riding? And somewhere in between the yelling and skidding gravel I hear my name. My co-workers, the lady standing behind me in the registration line, a girl I’d met once at a dance party – they’re cheering for me? Where did these people come from? I steel my stomach for the last lap. I’m flying. I have full control and no control and enough adrenaline to launch a small rocket.

But then…it’s over. That was the last lap. The rest of the women cross the finish and we gasp for air, exhausted, soaked in dust and sweat and endorphins. I meet some of them. We chit-chat and make fuzzy plans to go riding together in Forest Park. I love everyone. I still might throw up.

I stick around for a few of the subsequent races and discover the particular joy of heckling your comrades. “C’MON MOVE YOUR ASS, POTATO CHAMPION!” I yell to the respected Senior Engineer from my office as he cranks up a hill. Normally this would not fly but he smiles through his suffer face.

The sun drops and I ride slowly back to my home. I’m exhausted but my mind is a live wire and I can’t sleep. I keep thinking about winding through the sharp curves of the course… how I could have passed that rider, how I’ll take that hill… next week.

— Cross curious? There’s still four weeks left in this cross series and the Beginner’s Women class could use a few more riders. You’re awesome and you can definitely do this. Check the local ‘cross race schedule at OBRA.org.

“Some signal is given and then everything starts moving in fast and slow motion simultaneously.”

EXACTLY!!! That is such a good description of a CX race.

This is beyond awesome!

Rebecca, this was a joy to read! I loved it, you’re definitely selling it to those of us who have never considered it…

One if the best things i’ve read about a first cross experience. Thanks for sharing your experience Rebecca, and thanks to Jonathan for putting this on the site.

Really, really excellent article. Hey, maybe I could… yeah, I better stick to spectating. I inherited my father’s side of the family’s lack of grace.

I always love hearing about more women coming over the the “Cross Side.” Welcome, Rebecca. Can’t wait to see you at the races.

I loved the reptilian brain chatter :-9

What a great piece. Put Rebecca on the payroll Jonathan!

Well written and a great window into the world of cyclocross. A great sport in a great community of people.

Well done Rebecca!!!!! And thank you for coming out to play with us!

Glad we could help!

So good to see you out there tearing it up!!

Rebecca, that was so fun and dare I say exciting to read. Well done with the visceral description. Thank you.

Now I am totally looking forward to your next race’s story.