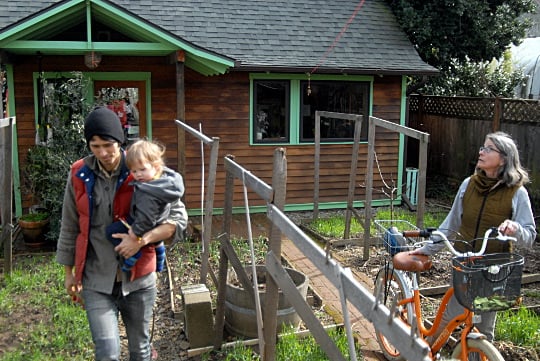 Sally Spear, 63, moved into a 200-square-foot backyard cottage designed by her son-in-law Schuyler Smith, 33, in 2010. Smith now designs ADUs for a living.
(Photo by M.Andersen/BikePortland)

When it comes to cars, accessory units in backyards and basements are nearly as low-impact as big apartment buildings next to bus lines.

That’s the conclusion of a new state-funded analysis (PDF) that combines the results of a survey of Portland accessory dwelling owners with other recent studies to start examining one of Portland’s newest real estate trends.

The average rental unit in Portland brings 1.31 cars on site, according to the U.S. Census. For transit-oriented apartment buildings, that falls to 0.83 cars — and for accessory dwelling units, it’s 0.93 cars.

In other words, transit-oriented apartments have been bringing 37 percent fewer cars into the city than the typical rental unit, and accessory dwellings (usually defined in Portland as being less than 800 square feet with a private entrance, bathroom and kitchen, among other requirements) bring in 29 percent fewer cars.

That’s the case even though Portland doesn’t restrict ADU construction to the blocks facing bus and rail lines, as it often does for new apartments.

As we reported in February, the number of tiny homes being built and permitted in Portland has jumped to more than 100 a year following a city decision to subsidize such homes by waiving development fees. Unlike many cities, Portland also allows property owners to rent the primary and secondary dwellings on a lot to different tenants.

In the study, author Martin Brown speculates on the reasons ADUs haven’t attracted many public complaints compared to “TODs,” the transit-oriented developments that have become a lightning rod for some central-city neighborhood associations.

“TODs add a high number of living units to a small area, so any increase in vehicles will be more noticeable,” Brown suggests. “In contrast, ADUs are dispersed through neighborhoods, and each additional dwelling creates only a small incremental change.”

On the larger scale, though, Brown calculates that ADUs and transit-oriented developments have almost exactly the same impact on street parking, because ADU residents are slightly more likely to have off-street parking spaces. According to the state survey, the average Portland ADU adds 0.46 parked cars to city streets, compared to 0.49 parked cars for the average transit-oriented apartment unit.

All this summer, Brown will be writing blog posts about this and other findings from his wide-ranging study on AccessoryDwellings.org, the local website dedicated to all things ADU. Other questions include whether ADUs increase senior housing more than average (conclusion: not really), whether they increase affordable housing more than average (only inasmuch as people seem more willing to let friends or family stay in them for free) and whether they are something renters truly demand (almost certainly).

Brown tackled the project with help from Jordan Palmeri of the Oregon Department of Environmental Quality’s green building program.

— The Real Estate Beat is a weekly column. You can sign up to get an email of Real Estate Beat posts (and nothing else) here, or read past installments here. This sponsorship has opened up and we’re looking for our next partner. If interested, please call Jonathan at (503) 706-8804.

Re: “… a city decision to subsidize such homes by waiving development fees”.
Is this really a subsidy? I understand the need for one-time development fees or taxes when a new greenfield neighborhoods is built. A new residential area will need new streets, utilities, schools, police and fire facilities and so on, if it is big enough.
But in-fill of small units in existing residential areas has very little up-front cost. Sure, in the long term the city and school district will have more costs, but property and income taxes will cover that.
Why should small infill developments be charged a one-time fee, then they do not require any new utilities, streets or other public projects?

Check today’s Mercury for an analysis of where property tax dollars go. Very little of them go toward transportation. Gas tax revenues have dropped significantly as cars are more efficient and people are driving less. The Transportation SDC’s (System Development Charges) are levied, I believe, based on projected trips generated. So, an ADU would be charged the same as a single additional apartment unit. That said, it’s still something, and waiving that fee means the other builders pay more to make up for the loss of these fees (if the same amount is to be raised). Hence, a “subsidy”. Others more deft with statistics will no doubt want to fine-tune my analysis.

Very interesting. Thanks for the article.

However I’d suggest taking a slightly different approach to this. We are not, I don’t think, chiefly interested in the average, the mean. Let’s face it: ADUs are already an outlie, even if a trendy one.

What if we looked at this by asking (of any demographic or architectural category, but ADUs are as good a place as any to start): How many ADU residents are carfree? How do you get around? What lessons can you share with others contemplating giving up their car or who don’t have one but wish to learn a few new tricks? Tell us about your life. Do you sometimes miss having a car? Or was getting rid of it the best thing you ever did? Perhaps you never had one to begin with? The outliers are the ones whose behaviors, choices, knowledge, experience we should be investigating.

My feeling is that perhaps half to three-quarters of us could do without our cars. But no one’s pushing us, challenging us to figure out how to get along (well, happily) without them, offering incentives. To me, frankly, 0.83 cars is about as depressing as 0.93 cars/dwelling. What if we instead asked what the 17% or the 7% who DON’T HAVE A CAR could teach us?

I’m glad the city is encouraging ADUs, more housing is better. But I don’t think they’re any kind of solution.

– 100 units a year? How reliable is an extrapolation from that, specifically with regards to car ownership and neighborhood response?

– How much of the reduced car-ownership relative to a city wide average reflects geography? Are ADUs concentrated in the inner east side where car ownership in all housing types is below city average?

– How many people who can afford a house close-in and invest in building an ADU will rent it out to a stranger? Section 8?

They’re not a bad thing, especially for giving people access to the inner part of desirable neighborhoods away from commercial corridors. But it’s tiny compared to Portland’s housing needs and I don’t think it will scale up.

bjcefola
– How much of the reduced car-ownership relative to a city wide average reflects geography? Are ADUs concentrated in the inner east side where car ownership in all housing types is below city average?

My nextdoor neighbor lives in an ADU. Her moving in added a vehicle to the block, but she shares it with the neighborhood: http://www.getaround.com/SEpickup?carid=100003944842718.

Sweet deal for all of us.

Now I’m confused. I thought that there were significant tax penalties involved in putting in ADU’s and I seem to recall that the costs per square ft were quite high.

I’m in a lovely and tiny ADU and can +1 to the low/no car as my urban transport is always cargo or normal bike.

100 a year with permits, how many of these are going up without permits?
What’s the cost to the city in lost tax revenue?
What is the tax impact to those who build an ADU legally?

And why is this more acceptable than infill and increasing density by doubling up housing on large lots through out the city?

Sure they’re cute but in most cases these domiciles don’t include parking and while they bring fewer cars, any cars that do show up end up on the street.

Let us start with a citywide zoning change allowing any, and all, garages located wherever they are on the property to be converted/replaced with tiny houses or second floor ADU’s…regardless of whether they butt up to the property line.

It is time to prioritze housing people over stuff. Think of all those alleyways lined with tiny houses constructed with salvaged wood.

Right now it’s a trend for People With Money. Let’s see if ADU’s become, through zoning and tax code changes, a meaningful and affordable housing option for low-income folks living east of 82nd Avenue, and then we’ll have ourselves a real conversation.

ADU’s are overwhelmingly being built by wealthy individuals who can afford the $50-$80,000 price tag. We have very little idea who the occupants are, but the photo ironically shows an ADU as a mother in law suite. I’ve seen others being listed on AirBNB.

Does this say anything at all about car free lifestyles? I don’t think so.

Seriously, most of Portland doesn’t live along Division / Clinton / Burnside between 52nd and 22nd but sometimes Bikeportland seems to think so.

Come to Kenton’s Salvage works next “Third Thursday”, July 17th to meet Dee Williams, one of the pioneers of the tiny house movement and co-founder of PAD (Portland Alternative Dwellings). She will be here along with one of her mobile tiny homes, “Vardo” and will also be doing a presentation shaped around her new book, “The Big Tiny”. Tiny homes built on small trailer chassis are one of the more popular alternatives to the ADU backyard homes.

What about bike parking for ADUs?

Speaking personally, as someone who’s a good candidate for renting this kind of development and as a longtime watcher of the ADU/tinyhouse movement as it has gained speed, I think ADUs and carfree transportation are a great fit. But often that lifestyle comes with at least .25 of a parking space worth of bikes to store. I know if I got the chance to rent an ADU I’d be budgeting to front the cost of a personal wave rack or nearby garage storage for some of my herd.