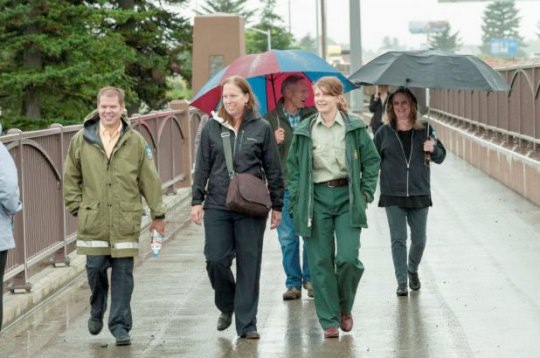 ODOT officials and assorted dignitaries walk across the path alongside the new I-84 bridge over the Sandy River.
(Photo: ODOT)

Things are looking up for bicycle access in Troutdale along I-84 and the Sandy River. 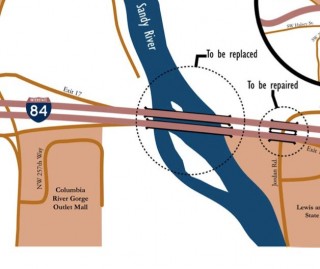 Last week the Oregon Department of Transportation (ODOT) opened the new Sandy River Bridge, a $93 million project that replaced the the I-84 bridges (in both directions) over the river and also repaired the bridges over Jordan Road. Troutdale is the gateway to the Columbia River Gorge and the project has been heralded by state officials as a key part of the region’s tourism and recreation strategy.

A big part of that tourism is bicycling, so it’s good news that the new eastbound Sandy River Bridge comes with a new bicycling (and walking) path. Currently, connections from the this new bikeway aren’t complete but ODOT tells us there are several other nearby projects in the works that could significantly improve riding opportunities in this area.

ODOT Region 1 Transit and Active Transportation Liaison Jessica Horning recently shared this map graphic (you’ll have to excuse the hand-written bits) and a few updates on the projects (below): 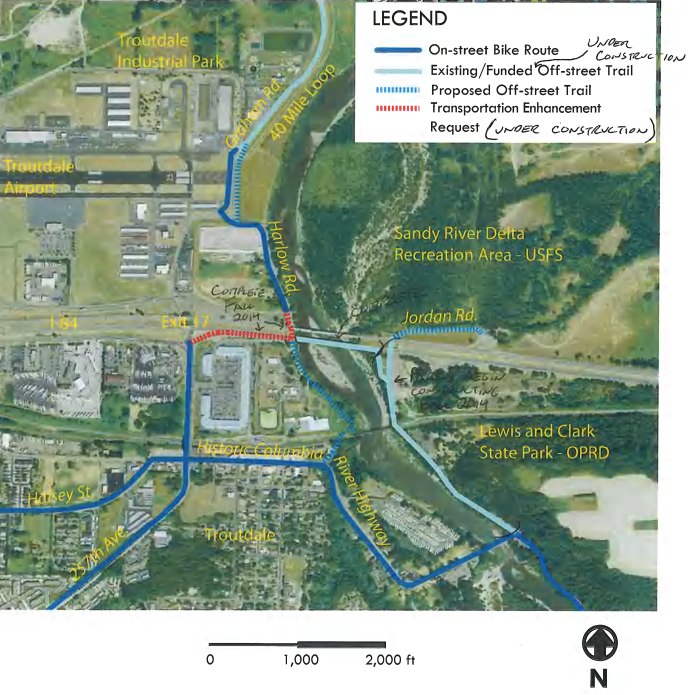 As Horning shared above, that blue dashed line south of I-84 and west of the river appears in Troutdale’s Transportation System Plan (updated May 2013). Here’s how it looks on the official map (in purple): 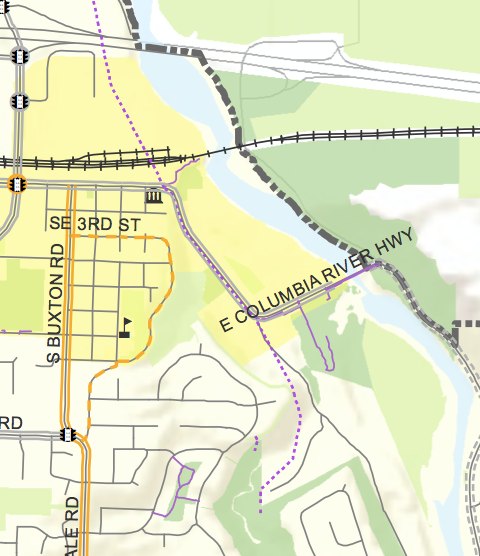 Taken together, these bikeway improvements will offer some nice riding opportunities for Troutdale residents as well as some new connections and options for the many people who ride through this area en route to other destinations.

I’m confused. Everything on the diagrams has annotations saying it is being constructed this coming fall… What has already been constructed then? Where/what was the photo accompanying this article taken? Sounds like a great project. The maps are a little confusing though!

Man…I wish it were raining here on the north side of the Columbia.

Puts the cost of the Tilikum bridge in perspective, doesn’t it?

Peejay: There are actually two bridges: one for eastbound I-84 and one for westbound. Because I-84 needed to be kept open to traffic during construction, each had to be wide enough to accommodate two-way traffic as the other bridge was torn down and replaced. Then there was the complication of managing traffic and keeping the Troutdale interchange functional at all times.

Looking at the price and saying that’s just for the bridge is like complaining that your dentist is charging $200 for 2 grams of amalgam filling. It’s the putting it in place and keeping you alive and comfortable that takes time and costs money.

Not to pee in anyones Cheerios but…. just wondering how its gunna work out when the Federal transportation trust fund expires in August.

The shortage of work for planners, engineers and designers is already a concern. Projects aren’t starting because necessary funding is not in the pipeline. That will of course reverberate into the realm of surveyors, botanists, wetland biologists, archeologists, geotechnical engineers who perform preliminary work prior to construction. And construction workers and the businesses that supply materials for construction will also find themselves short of work. The results of this will be a great deal more than the employees of living wage jobs cutting back on lattes (which they will certainly do)

State and local governments will cut back, and skim more from tax payers in new clever funding schemes. (Street fee anyone)

I suppose the anarchists who frequent this blog will be delighted with the thought of a cleansing flood remaking the economy. My prognostication is that a large portion of the middle class will evaporate, the 1% will grow more lofty and the rest of us will be either be in line, or checking groceries at WalMart.

Chris I
Reply to  Granpa

The only potential benefit I see is more transportation control at the state level. Oregon would be better off if we didn’t send gas tax money to the feds, just to get it back for a few mega-projects.

J_R
Reply to  Chris I

Chris: Your understanding of the way the federal transportation funds are distributed is very far from the truth. Almost 1/3 of the ODOT budget comes from the feds and it’s NOT used for just mega projects. There are literally hundreds of transportation project for all modes (NOT just highway projects) that receive federal funding. Take a look at ODOT’s website for their budget document and the State Transportation Improvement Program.
Granpa is absolutely right that the lack of federal funding will have huge impacts on all users of the transportation system and on various professionals and construction folks who have worked to make it better. I’d further predict that the projects and funding that are cut deepest will be those most benefiting users of bike, pedestrian and transit components of the transportation system.