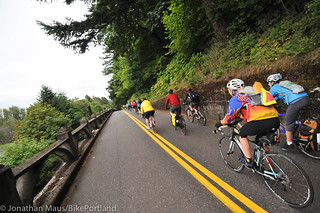 A new online survey just launched by Travel Oregon wants to know more about your bicycling experiences in the Columbia River Gorge. With exciting cycling momentum — both on and off road — in the Gorge, state tourism officials now hope to analyze the impacts of recently completed projects as they prep for new ones already in the pipeline.

As we shared back in November, nearly two miles of newly paved cycling paths opened adjacent to I-84, completing the connection between Troutdale and Cascade Locks. That new path is already spurring economic development in Cascade Locks, a small town that is quickly becoming a bicycling epicenter in the Gorge.

And Travel Oregon says more projects are in the works, including a new trail segment between Wyeth (Exit 51 on I-84) and Starvation Creek State Park (Exit 56 on I-84) and the completion of the trail between Viento State Park and Hood River. Once those sections are complete, it will be possible to ride through Gorge from Troutdale to Hood River without ever having to ride or walk on the I-84 shoulder.

Travel Oregon is conducting this survey in order to get a clearer picture of where people are riding, how often they’re traveling to the Gorge, whether or not they’re staying overnight, and so on. The results will be used to make better decisions about project planning, funding priorities, and advocacy efforts.

The Northwest Trail Alliance is encouraging their members to take the survey because, “This is the first official survey we have seen that asks meaningful questions about Mountain Biking in the area.”

Here’s more from an email sent out by the NWTA last week:

“Imagine packing some gear on your mountain bike and riding to Troutdale to ride along the new Historic Columbia River scenic bikeway to a bike-in-only campground near Cascade Locks (after filling your growler at Thunder Island Brewing and buying some supplies at the store). The next day, you hit the new CLIMB trail next to easyCLIMB for a few hours, then pack up your stuff and ride to Hood River along the scenic bikeway. After leaving your gear down the hill at another bike-in-only campground, you take a new trail up to Post Canyon from the scenic bikeway for another epic day. After that, you swing through Hood River for a killer dinner, a few supplies, and then back to camp.”

If that sounds good to you, take five minutes and complete the survey.

I haven’t seen a good map of this trail system yet. Is there a link somewhere that I missed?

Try OSM- openstreetmap.org They have a lot of trails on their maps.

Note that the questionnaire does include both road biking and mountain biking; I was a bit confused by the reference to Mountain Biking above. Bike-only campgrounds in the Gorge? I’m there!

Hood River currently feels like an Island to bicycle travel, since not many sane people would enjoy riding i84 into Hood River. The alternative is a long detour to Hwy14 to the Dalles and then back to HR, which I can only label as unreasonable. I would love to do a two-day ride, day 1 to Hood River and day 2 back across Lolo Pass.

Hood River is an island to bicycling – quite a few residents west of the downtown won’t even risk riding across it to get to the trailhead on the east side (they drive instead). As someone whose logged frequent trips riding (in the lane) through downtown I can see why. It’s not that the city itself is averse to improvements for bicycling, it’s just that the infrastructure has left them with very narrow streets and not much budget to work with. There are new bike lanes in on the west side that came with government funding to move a street whose intersection was too close to an off-ramp (which federal rules disallow now). Any connectivity to ‘Da Hood’ would also have to include connectivity through it, but the city is open to that and planning for it. OTOH, The Dalles has really nice bike lanes through it – but it’s also flat and wide, not narrow and hilly. Someday Hood River will have a pedestrian/bike path along the waterfront as nice as that in TD, but not soon.

The Tour de Hood ride (http://www.tourdehoodride.com) that accompanied the now-defunct Mt. Hood Classic used to do 96 miles out to Dufur over Lolo Pass and back up to Meadows. Man, I loved that route!

I doubt you’ll see the day where there is bike-only camping in Hood River though. Many attempts at putting in campgrounds through the booming windsurfing days were thwarted, and now that Walmart no longer allows overnight camping you will see many RVs in summertime evenings parked along dark streets (such as Wasco’s west end).

When you say “trail,” are you referring to the Columbia River Scenic Highway exclusively? Or are there bike paths and/or other roads for part of the route?

It refers to roads and mtb trails.
The Wyeth section, to clarify, is like 26 miles of future MTB singletrack, while the Columbia River Highway sections are bike/multi-use paths..

Personally I have my Rouge Hoe and shovels sharpened, ready to start digging the Wyeth Section of trail.