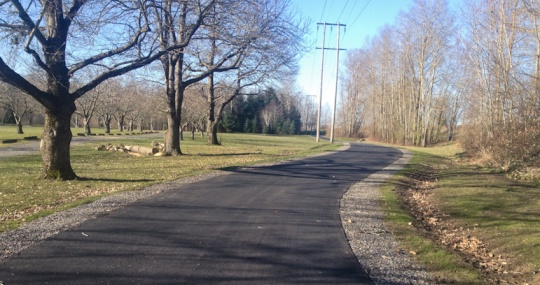 Congressman Earl Blumenauer will be in town next week to celebrate the opening of a new bicycling path along Marine Drive. The path curves for about one-half a mile through Metro’s Blue Lake Regional Park. Blumenauer will be joined at the event by Metro Councilor Shirley Craddick on April 22nd (which is also, not coincidentally, Earth Day).

I’ve ridden the new path several times in the past few months en route to Troutdale (and points beyond) and I can say it’s quite nice. Not only is it smooth and scenic, it’s an oasis from the high-stress riding alongside fast auto traffic on NE Marine Drive. My photo at right is from January, but these days the path is even nicer as it winds through a grove of cherry blossoms and a carpet of gorgeously green grass.

Here’s more about the path:

At the junction of the Gresham-Fairview and Marine Drive trails, the new half-mile path takes pedestrians and bicyclists through a scenic portion of the park. The Blue Lake trail eventually will connect with sections of the 40-Mile Loop being developed by the cities of Fairview, Gresham and Portland and the Port of Portland…

When it’s done, the 40-Mile Loop will stretch from Kelley Point Park at the confluence of the Willamette and Columbia rivers to the Pacific Crest Trail in Cascade Locks – putting Oregon on the map with one of the nation’s premier trail.

This path is one of just several sections of the Marine Drive Bike Path that will allow you to ride east-west along the Columbia River without riding right next to fast-moving cars and trucks. It’s a real gem of a path network, but unfortunately it’s not fully completed yet. Hopefully getting Rep. Blumenauer out to see it first hand will spark his interest in taking the Marine Drive Path from good to great.

Excellent. I find all kinds of my anatomy clench up while riding Marine Drive.

The Metro web site is helpful in explaining how to find parking for this event. Happy Earth Day!

Guess I should acquaint myself now that Sandy is so bad. It used to be a fast bypass, now it’s got a bike lane full of tire shredding debris.

When was the bike lane ever not full of debris? I’ve been riding it for six years and nothing has really changed.

Champs
Reply to  Chris I

With the curb, glass doesn’t find its way onto the gravel shoulder anymore.

The last time I tried to ride out that way from Troutdale, staying off Marine Drive wherever possible, I ran into a very difficult and dangerous crossing trying to get from the south side to north side of Marine. I believe it was at 122nd, or one of the other through streets to Airport Dr.
The traffic on Marine was so heavy I gave up and turned around. There wasn’t even a crosswalk there, even though the paved path continues on both sides of Marine.

That’s one of the ugliest spots in Portland. When heading westbound, don’t use the bike path between 138th and 122nd. Just stick to the shoulder. The crossing at 122nd is horrible.

Gresham -Fairview barely goes anywhere near this. Unless you count Halsey and 223rd of course.

I like the path, but east of it, the path is almost unridable where trees roots have grown under it, then it has a poor crossing at Interlachen on the west end. Then you have 2 or three more unsignalized crossings.

Champs and falcon, be sure to call in a work order to safe@portlandoregon.gov to fix the root bulges and shoulder debris. Those are maintenance issues.

A half mile of new path is good and all, but if Portland wants to complete with minneapolis for the #1 slot it’s going to have to build longer paths and open them more often.

Meh, this still dumps you out on Marine Drive at Interlachen, sure it’s a step in the right direction, but still a far cry from a continuous facility.

I agree. Marine Drive is a great example/illustration of what plagues many bicycle facilities in the Portland region. It’s good, but far from great. Even before hearing about this event, I’ve been planning a story about Marine Drive, showing how nice it is (in parts) now, but how amazing it could be if we just finished the dang job!

This brings up a lot of other interesting issues… like I wonder if we would get more usage/quality out of our bike network if we took our existing bikeways from good to great… instead of embarking on new projects? Unfortunately new projects tend to be more exciting for advocates/electeds so guess what we tend to focus on?

Anyone feel like starting a Friends of Marine Drive Bike Path group? 😉

I’d love a longer story on Marine Drive in the future.
My lady and I tried once to make it out east, but turned around.
Maybe we are not the most brave cyclists, but it just felt pretty bad, and we never got to experience the nicer parts of the path.
Thanks.

Ill just keep the hammer down on Mar Dr , i dont have time to go down to your little cute path.

It would be helpful if posts like these had a map showing the new section. You know, for those of us who haven’t by chance “ridden the new path several times in the past few months.”