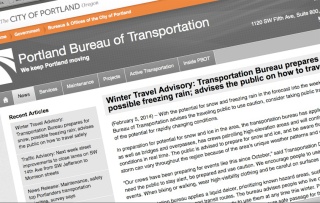 Are all road users equally served by traffic advisories?

We think the words people use say a lot about their perspectives and priorities. That’s why I always enjoy reading traffic advisories and press releases from our local transportation agencies.

When it comes to severe weather warnings, I have communicated directly with both the Portland Bureau of Transportation (PBOT) and the Oregon Department of Transportation (ODOT) that their statements should not ignore the fact that many people in this region ride bicycles in winter. Yes, even when it snows and rains.

So, with this week’s big snowstorm on its way, I sat back and waited to see how each agency would handle the inevitable bad weather road advisories. I’m happy to report, that while not perfect, both agencies have improved a lot in recent years! Let’s start with ODOT…

I had high hopes that ODOT would recall past advice I’d given them and would not solely address “drivers” in their Region 1 (Portland area) weather alert. While I still feel their statement was more auto and driver-centric than it should be, I was very pleased to see how they at least mentioned — albeit not front and center — something other than driving.

Here’s their headline and introduction. Notice how it’s directed toward just one type of road user:

Forecast predicts dangerous driving conditions: Travelers should watch the forecast and stay off the roads if conditions deteriorate

Motorists should use extreme caution this weekend if bad weather makes for treacherous roads in the Portland area.

As a road user who primarily rides a bike (and I know there are many others like me, and others still who almost never drive), this type of language makes it seem like my experience isn’t as important as others. As the statement continued, ODOT did include some safety tips; but they too were completely auto-centric.”Pedestrians” and “bicyclists” were only mentioned as barriers one might encounter while driving:

“No one can safely drive on ice. If roads get icy, consider not driving or delaying your trip until the weather warms and the ice thaws. In ice or snow, allow plenty of stopping distance and watch out for pedestrians and bicyclists because stopping distances are so much longer.”

Then it got better:

“Consider leaving the driving to the professionals and taking mass transit. Consider walking, riding a bike, working from home or taking the day off until the roads are clear.”

But in the last sentence, it was back to ODOT’s expected default behavior:

“Driving on ice is never a safe choice. The safest thing to do is stay off the road.”

It have been just as effective and a lot less auto-centric to write, “Traveling on ice is never a safe choice”. After all, that would have applied to everyone — whether they were driving, walking, biking or taking transit.

I am very happy with PBOT’s “Winter Travel Advisory”. They avoided mode labels and used the neutral “traveling public” or just “public” when warning folks to use caution out on the roads. The only time mode labels were used was to share specific tips and advice.

Here’s their headline and intro:

Transportation Bureau prepares for snow, possible freezing rain; advises the public on how to travel safely

See how everyone will feel like that message applies to them? They even managed to get a plug in for public transit.

And then there was a word from Transportation Director Leah Treat. Again, she suggested not driving: “We encourage people to use public transit during storm events.” Then she advised, “When biking or walking, wear high-visibility clothing and be careful on surfaces that could be slick.” Notice how she used the verbs “biking” and “walking” instead of “Bicyclists and pedestrians should wear…”? That’s a great approach and it’s a trick I use — and recommend — whenever possible. Verbs are almost always better than labels.

It’s great to see bicycles included in PBOT’s messaging. I recall just a few years ago in 2009 when bicycling was completely left out of a PBOT storm response survey. And going back to 2008, bicycling didn’t even merit a mention in a snowstorm traffic advisory.

Overall, both agencies did better than they have in the past. In the future, we’d love to see statements that have equal appeal and value to all road users — whether they drive a car or not.

— We think about language a lot here at BikePortland and we only sometimes write about it. Check out our “language matters” story tag for more.

In their defense, the people with the biggest problems right now will be the motorists. Cars suck for snow (unless you got some wicked tires and AWD)… for the rest of us bus riders, rail users, bike riders and pedestrians, there isn’t much of an issue anywhere out there.

But I digress… everybody be safe… and don’t go caging out there in the snow, it’s way sketch! 😉

Along that line, it is indeed motor vehicles that cause the greatest carnage on the roadways when out of control, hence warnings that are directly mostly at drivers. Sure, I can slide out on my bike and take out a person on foot, but a 30lb bike moving 10mph has a lot less kinetic energy than a 3,000lb car at 40mph, by several orders of magnitude.

A language flub just jumped out on at me in a new video on the PMLR Bridge project. Why aren’t bikers considered real “commuters” as well?

text: “The project’s Park & Ride at the SE Park Ave MAX station will do more than provide commuters a place to park cars. It will also have secure bike parking…”
http://www.youtube.com/watch?v=pQX3tAGnbD0
at 1:20

transcript: “This Park & Ride does much more than provide commuters a safe place to park. It will also include a secure, enclosed Bike & Ride facility, with 73 bike parking spaces…”

Josh, i probably should just keep quiet, as I was most certainly not paying attention is Mrs. McLeary’s 8th grade English class when we were diagramming sentances (zzzzz….), but I read the “commuters” as rerferring to both people parking cars and parking bicycles.

Can you clarify the “as a road user who doesn’t drive” – don’t you/wife own a mini-van (you’ve mentioned this previously)? Is she the only driver in a family with multiple kids?

Yes. I do have a mini-van. And yes I drive it. Although in a daily context I do not consider it an option. The intent of my sentence is on target, but I understand it should be clarified. I’ll go edit it right now. Thanks.

I think your reporting on the ODOT language is much less valuable than some of your other work. It seems like you’re just looking for something to criticize. The way I read it, they’re telling drivers to watch out for other travelers and consider staying off the road altogether. And, really, how many bike commuters look to ODOT for info on their commute? I sure don’t.

Language is important. Thanks for thinking about this and reporting on it.

I wonder what would happen if we tried to reclaim the word “drive.” Take it back to an older meaning of providing both the force and the direction, and what is done in a motor vehicle is reduced to little more than steering. I am driving my bike by that definition far more than someone letting gasoline move their car.

I think about this too. my theory:
bike = horse
car = vehicle pulled by team of horses

One rides a horse; one drives a team.

Jonathan, great to read this. i always enjoy paying attention to language!

So far this morning, the ratio of cross country skiers to cyclists on Clinton is about 7 to 1.