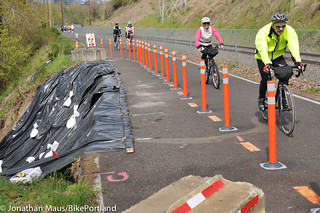 Hang in there. It should be done by the end of this month.
(Photo by J. Maus/BikePortland)

By next month, the Springwater Corridor bike path will be in the best shape its been in since early 2012. It will also boast a new, 2.25 mile section of pavement at its southern end in the town of Boring.

Portland Parks & Recreation is currently trying to finish up its repair of major damage to a section of the popular path just south of the Ross Island Bridge. A portion of the path fell into the Willamette River in March of 2012 and Parks is still working to repair the damage. The project has led to a full closure of the Springwater from 9:00 am to 4:00 pm on weekdays since the end of September. Due to wet weather that prevents paving, the City now says the path will remain under construction until “at least this coming Friday” (the 22nd). For more details on the construction and why it has taken so long, read this article published by The Oregonian on Monday.

Clackamas County is also working on the Springwater. Their project is paving a 2.25 mile section between SE Rugg Road and Dee Street in Boring. 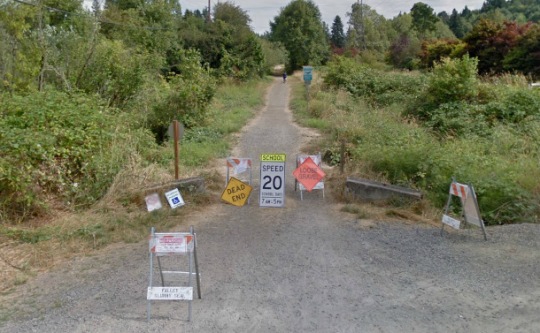 And here’s a section almost completed as of October 22nd… 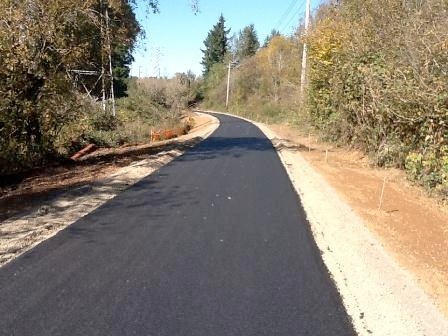 This $1.9 million project ($1.2 million of which came from a federal Transportation Enhancements grant) will convert the existing narrow gravel path into a 10-12 foot wide paved path (with a gravel shoulder) that’s similar to conditions on other parts of the path (which currently ends at SE Rugg). Rain has forced delays in the completion of this project and Clackamas County tells us they hope to be finished by November 25th. In the meantime, this section of the path will be closed to all public access. For more information on this project, check out official website.

In other local bike path news, we have confirmed that the new paved path along the Columbia Slough between N Vancouver Avenue and N Denver is now open to the public.

How did rain slow the progress a month? We had one of the nicest Octobers, and only one bad week in September. One week set the whole project back a month?

The connections for the Columbia River route are also delayed.

And we’ve been waiting 18 months!

the included link from the oregonian, had you bothered to look at it, explains that the special nail gun they’re using to reinforce the shore was broken and needed repair before they could work on the project and finish paving.

To be more clear, the article refers to the part on the Willamette.

I’ve so far seen no explanation for the paving past Rugg except for “rain.” We’ve had some very nice weather, so either they were overly optimistic about the weather, or are blaming the delay on it rather than the real reason.

The paving is complete. I rode out there last weekend … it’s really nice. There is still some shoulder work to do, and signs to go in at the crossings. Although there are signs stating that the trail is closed, it is not barricaded and there were quite a few people using it.

I only wish there was a better connection to the Cazadero Trail in Boring, but I guess that is a different project.

Is there any update on actually trying to connect the trail through Sellwood? Is this being actively pursued? The rail line is right there, seems like it would be so easy if they just get the right of way.

Chris I
Reply to  Todd Hudson

That seems odd. The trail already parallels the track, so the risk of a derailment squashing a bunch of people is only marginally increased. I wonder if Waverley is part of the opposition?

ErinC
Reply to  Chris I

Railroads are notorious for not “playing ball” when it comes to folks asking to use a sliver of their right-of-way. In the land of transportation, the railroads are gods… or at least that’s how they see themselves.

Used to be rail companies played god-like roles with ROW, but they’re probably more paranoid than anything these days of losing whatever they give up forever. This is a fascinating read on the history of railways in the U.S. and how they were forsaken for highway and airport subsidies (and continue to be): http://en.wikipedia.org/wiki/Amtrak It’s a wonder we have a rail system at all.

Joseph E
Reply to  Chris I

The problem is right here: http://goo.gl/maps/Q2VuW
See how the track crosses from the north side to the south side of the right-of-way in this section? The bike path would have to cross the tracks from south to north (going east), like this:
https://mapsengine.google.com/map/edit?mid=z63l2xapyReA.k3Hkx8nRWWT4

Does that really seem that insurmountable? We put a man on moon over 40 years ago. “We’ve landed on the moon!!!”

I heard, or read, somewhere that the trail can’t follow the rail line through Sellwood neighborhoods because the MUTCD doesn’t have any crossing markings for a path and train track to simultaneously cross a street.

Seems like this is a barrier that could be gotten over with a group of stakeholders willing to work with the city for a couple years to come up with some viable designs and test them out.

I don’t see markings and signing as any sort of significant issue for the Andover crossing. It is the same geometry as the crossings nearby at Spokane and Umatilla.

Nice ‘mac, indeed! Rode it a week ago, very pleasant –

Anyone know what’s up with the (unpaved) Cazadero trail that continues beyond Boring? Can you get through to Hwy 212? How’s the surface for riding?

“Can you get through to Hwy 212”
No, not without crossing thru private property, or fording the creek (in a deep gully).

thanks ! pics very helpful – looks manageable on touring tyres. Will give it a go next season.

That last two miles before Boring was one of the best stretches on the whole trail. Now it’s just, well, boring.

Only quasi related to the topic, but still SpringWater MUP:

At the diagonal light crossing @ Johnson Creek Blvd: the green bike boxes over the light signal sensors are faded and ratty and many new to that crossing seem to miss them and wait and wait , eventually giving up. yes, I know there are signs, but the green painted boxes look like they’ll be completely gone by next year.
Also on the east end of the orange bridge over Mcloughlin , there is a gap/chasm that’s opening up … about 3 to 4 inches wide now.

awesome thanks lets keeping building this forward and towards every city in Oregon. green paths yay!

Just today I rode Springwater from se 111th to Sellwood. At the spot where it crosses LUTHER , the “Bike Xing” sign is hanging upside down by 1 bolt, has been for a couple of months. APPEARS that some meth-head was trying to liberate it.
It’s now positioned perfectly to block a cyclist’s view of oncoming traffic.
Is that Multnomah or Clackamas Co. right there ? I do know that the diagonal crossing at the bottom of the hill was installed by Clackamas, but the county lines kinda run right along the trail in some places.

I think that’s Clackamas, Mulnomah ends between Harney and Luther (in a crazy line that jumps all over the place depending on the block).