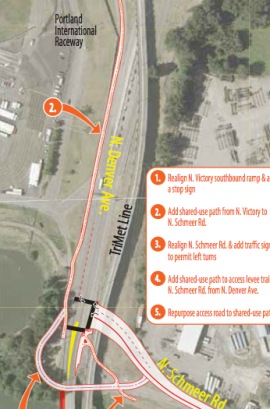 The Oregon Department of Transportation (ODOT) is entering the design phase of a project that will bring major changes to bicycling conditions between the Kenton neighborhood, N Denver Ave, and connections to Schmeer Road and Portland International Raceway (PIR).

On the project website, ODOT says the changes come from issues with traveling in the area that were first identified through a study completed during their I-5 Delta Park Project in 2006. That study, says ODOT, “pointed out multiple safety and operational concerns along the Denver Avenue corridor, including poor sight lines for drivers, deficient turning movements, gaps in bicycle/pedestrian paths, and the poor conditions of the Denver Avenue bridge decks and railings.” ODOT won $2.5 million for the estimated $4 million project through the 2012-2015 Metropolitan Transportation Improvement Program.

Denver Ave is a key connection between the growing Kenton neighborhood and PIR, as well as a main corridor for folks headed northbound to Vancouver via Delta Park. This project covers about a one-mile long stretch and will come with big changes, including a new dedicated bike path. These changes will also connect to a City of Portland project that has recently paved a new portion of the Columbia Slough path between Denver and the Vancouver Ave Bridge (more on that later).

Here’s what’s in store (from ODOT):

Download the full project map here (PDF). Construction is due to start summer of 2014.

As you can see, there’s a lot to talk about! This is an exciting opportunity to improve bicycling in this area. To learn more about it and ask ODOT your questions, they’re hosting an open house on October 22nd from 5:00 to 7:00 pm at the Kenton Firehouse (8105 N. Brandon Ave).

I’m not sure I would describe Kenton as “growing”. There is no new land to develop and infill development is pretty minor. It seems that it’s just gentrifying and the commercial areas are becoming more shiny

Yay!! Just wish biking over the bridge to Vancouver was more pleasant, but at least the rest of the ride will be better.

The traffic light is an interesting addition that I suspect will be vehemently hated by the Washington-bound evening commuters. I wish someone would find a way to reduce this freeway cut-through traffic in downtown Kenton. This light might make a tiny dent in it, but probably not much. Seems like they need to find a way to divert people from Denver to Interstate. I lived on Denver until just recently and freeway-bound auto traffic is smothering its liveability between Lombard and Interstate.

Chris I
Reply to  Nick

You can always tape down the crosswalk button. That should produce a nice backup during rush hour, and would effectively create diversion.

Agree. I think that reducing Washington bound traffic from neighborhood streets all through North Portland requires more freeway access. (Something that hasn’t ever even been considered as far as I know)

There’s only one northbound freeway access from the East side of i-5 between Broadway and Delta Park (at Rosa Parks) and no way for drivers to access I-5 north of there without using Denver.

I used to ride that area fairly regularly when I worked in Vancouver. I admit the pavement on the Denver Bridge was poor, but I don’t think this is much to get excited about. Useable shoulders on Schmeer would be really nice.

why is ODOT in charge of these Portland surface streets? shouldn’t PBOT be doing this? or did PBOT let ODOT do it because it’s so close to I-5?

Here’s the question I’ve got: seeing as ODOT isn’t putting any bike facilities on Schmeer (because they’re expecting people to use the new 40-mile Loop extension instead) how will people connect between the 40-mile Loop path and N Whitaker? N Whitaker is that street immediately east of I-5 that goes to Delta Park. Kenton to Delta Park is an incredibly common maneuver for folks biking and this project SHOULD help improve it.

Looks like I was wrong. Separated facilities on that section will be better.

Carl @ BTA: the City is building that connection from their new 40-mile Loop facility to Schmeer at Whitaker. It’s not part of ODOT’s project. It’s part of the City’s.

Perhaps some clarification, how does this improve access to Delta Park? Are people going to start going on Whittaker via Schmeer? Or is there an improvement which makes the connection from Victory to Delta Park (northbound) easier than the left turn across two lanes of traffic?

These improvements seem to help with access to the Slough Trail (or whatever it’s called) coming from Kenton. Welcome improvements, esp since I ride out to Kelley Point via this route with some frequency, and really hate the current connection with the poor pavement and scary crossing to get on to the trail from 99.

In a year when ODOT can’t catch a break on any other front, this is some nice news. Thanks, ODOT.

Now if we can just get PIR to do something about their beat up plywood fencing. Riding past that yesterday i was thinking “what a way to disrespect the neighborhood.” How much would it cost them to put up something decent looking facing our street.