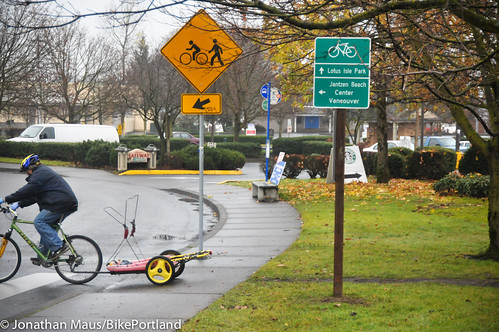 Even for the many Portland-area residents who ride bikes but aren’t inclined to object to expensive urban freeway expansions, the Columbia River Crossing has always had one small thing going for it: it’d widen the Vancouver-Portland bike crossing and simplify the maze of trails required to reach it.

With pro-CRC lobbyists hastily re-gathering votes for a possible Oregon-funded version of the project, it looks like the bike facilities are being scaled back.

During its years of planning and outreach, one of the features of the Columbia River Crossing concept was a shared-use path through Hayden Island that would put bike traffic at a different height (or “grade”) from auto traffic. A Sept. 25 memo (PDF) from the CRC’s environmental manager, however, shows that the new “phased” project would save money by indefinitely postponing the grade separation and sending bike and foot traffic through “at-grade intersections on Hayden Island.”

Does this mean a shared sidewalk with crosswalks, like there are now? A row of posts in the street? A painted bike lane? How steeply would bikes have to descend from the 116-foot peak of the crossing into Hayden Island’s street network?

When we spoke with longtime CRC supporter Sen. Rod Monroe in August, he said a dedicated bike path across the Columbia was “an absolute quid pro quo” for his and other Democratic lawmakers’ support of the project. But as close watchers of the project know, most of the CRC project isn’t actually the bridge itself. How many cost savings north and south of the bridge are necessary before lawmakers, voters and federal officials start thinking of this as a categorically different project? That’s not clear, either.

Update 11:21 pm: Columbia River Crossing spokeswoman Mandy Putney has responded with the answers: “On Hayden Island, there would be painted bike lanes. There is no shared sidewalk. … Our current conceptual plans illustrate a 4.5 percent grade. The design build contractor will be responsible for finalizing the grade and design.” (For comparison’s sake, 4.5 percent is about the slope of the road descending on Southeast Morrison Street at 11th Avenue.)

In related news, Oregon Senate President Peter Courtney issued a statement today saying that he doesn’t think the CRC should be discussed at the legislature until the regular session begins in February.

I’m sure those of who can will enjoy carrying our bikes up and down the 100+ feet of stairs, or taking an elevator (that is sure to double as toilet) WHEN it is working.

And too bad if you have a cargo bike, tandem or use a trailer.

Everything that is not part of the freeway expansion is just window dressing to be dropped when needed to make political hay.

was carless
Reply to  Rider49er

You can’t put stairs on a bridge. Period.

Panda
Reply to  was carless

How do explain the stairs at the end of thw Wausau bluff pedestrian and bike bridge?

Dan America
Reply to  was carless

Broadway, Hawthorne, Morrison, Burnside bridges ALL have staircases on them.

How about this charming $60 million court case…lets just keep spending.

ODOT seems to think they can just keep spending no matter what anyone tell them.

I’d like to hear wsbob’s take on this. He’s typically keen to remind us that ODOT is beholden to the citizens and only spends money according to majority priorities. Hm.
“Documents show state officials say they can burn through another $60 million, if they need to, without lawmakers giving their OK to the Oregon-only project.”

Bait-n-switch might just be par for the course for this kind of project. The WWeek recently ran an article about the Tappan Zee bridge replacement in New York, mainly focusing on the lesson to be learned about how much less federal funding than expected was available for that project. But another lesson from the Tappan Zee is that, now matter how many nice-sounding transportation alternatives are promised to sweeten the deal, they can be yanked at any point should they get in the way of the primary mission of building a certain kind of infrastructure:

After years of public comment in favor of including public transportation on the Tappan Zee Bridge replacement, and after all previous replacement alternatives studied by the New York State Department of Transportation (NYSDOT) as part of the required environmental review included transit, New York Governor Andrew Cuomo and the Federal Highway Administration in October 2011 abruptly reversed course. The new project they advanced lacked transit, and transit advocates assert that, if built as proposed, the replacement bridge would lock in new auto- and truck-only infrastructure for years.

State rep. Kevin Cameron’s likely going to be disappointed. I know he was looking forward to tolling cyclists using the CRC.

Wow this POS just keeps getting better and better.

They probably figured that they won’t get our support anyway, so they might as well take the bike facilities away and double-down on business, labor, and freight support.

I like the part where Oregon has to agree to compensate upstream shippers (all in Washington) when they can’t get their loads under the new, lower bridge span. So far that cost is estimated at $86 million/year. And Oregon pols seem to be willing to buy it! Who elects these guys?

I believe they are appointed by the Governor, Kitz.

Leave it to Portland to find a way to fix the only thing that wasn’t broken with a plan that will never happen. Seriously, anything that’s not a draw bridge or requires moving the river channel isn’t going to get coast guard approval, and this new design doesn’t satisfy that. Oregon’s literally got a quarter of it’s population starving and/or living in the streets because they can’t find adequate employment, and it’s wasting countless billions now on paper bridges that will never, ever see reality.

The most recent plan, a fixed bridge with 116 feet of clearance, HAS gotten Coast Guard approval.

“The Coast Guard’s blessing clears the way for a new Columbia River span with 116 feet of clearance over low water. CRC planners scrambled to reach that number last year after initially designing a fixed span at just 95 feet high — a level dismissed as too low for the economic and navigational needs of the river. The existing I-5 Bridge offers up to 178 feet of head room when lifted.

“The revised height of 116 feet still isn’t high enough to accommodate all existing traffic on the river. Earlier this year, the CRC reached mitigation deals with three upriver manufacturers whose largest products wouldn’t fit under the proposed bridge. The agreements would pay the companies a combined $86.4 million.

“Vancouver-based Thompson Metal Fab would receive the largest share of that, at almost $50 million…”

If Oregon literally has 25% of its population homeless and or starving, I’m going to recommend to my legislators that we blow the existing bridges and sever all ties, as pestilence is almost certain to follow.

Seattle isn’t in any better shape.

As J_R mentioned, the bridge has attained Coast Guard approval, but I agree completely with your sentiment. Permanently blocking river freight is simply wrong on its face. The Coast Guard approval proves this is a boondoggle an a juggernaut, not that it is an acceptable concept.

What did everybody think was going to happen when the original bridge got scrapped a few months ago? That a BETTER bridge was going to be offered to cycklists? The bridge that got scrapped was our best bet for a good bike facility to Vancouver. That is now gone forever. You know what they say- be careful what you wish for- it might just come true.

It’s too bad that Senator Monroe still thinks this is a good idea, especially given his district. Economist Joe Cortright’s study shows how conjested and polluted I205 and the rest of East Portland will be when toll avoiding drivers change their routes. Senator Monroe should be ashamed of himself, his constituents deserve better than this.

If you vote for this monster, I’ll vote AGAINST you.

Already planning my vote against Jules Koppel-Bailey for county commish.

And Jackie Dingfelder, one of only 2 to vote against CRC, has resigned to join Hales’ staff.
FU K’haber.

Does he maybe own land in the right of way ?

I am just now becoming aware of this CRC. What is so bad about it?

Instead of the CRC, Hayden Island could have the first real-world test of autonomous automobiles in the United States. It would provide autonomous taxi service around Hayden Island.

Hayden Island is only 8 miles from the Daimler manufacturing facility on Swan Island. Daimler makes the electric SmartCar.

A demonstration project with 10 cars would attract capital and talent to Oregon. It could reduces congestion and provide better access to shopping and natural areas at lower cost.

Phase Two would add access to and from the Expo Center Light Rail and Jantzen Beach Super Center. A new AutoCar/Bike lane would added to the West side of the North Portland Harbor bridge.

Phase Three would add access to and from Vancouver. Access would be proved by a new AutoCar/Bike lane added to the side of the bridge, similar to the Hawthorne Bridge extension.

The idea came to me today after reading about Milton Keynes. What do you think?

Federal money is still available for the proposed Columbia River Crossing, according to Gov. John Kitzhaber, who said Friday that the controversial bridge and highway project remains on track.

He AIN’T getting MY vote if he runs again. NOPE, No way.