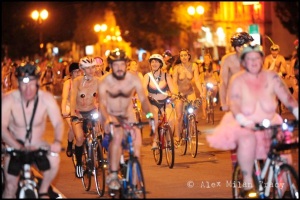 The official count is in: Portland’s World Naked Bike Ride broke a record this year with an estimated 8,150 participants.

The last two years, ride organizers put the number of riders at 4,500 and 4,200 people respectively — so this is a substantial increase. The count was performed by volunteers who sat down tonight and watched video taken of the ride last Saturday. Ride organizers installed an overhead video camera on SW Jefferson just past the starting point of the route specifically to document the turnout (there has been a bit of controversy in the past about inaccurate counts, especially the inflated numbers that were originally reported for the 2010 edition).


According to Chris McCraw, one of the volunteers who watched the video, it took 73 minutes from the time the first riders passed the screen until the last one went through. McCraw the video showed a few minor crashes, one guy on a Segway, and “many more skateboarders and runners than expected.” McCraw also said that a significant amount of people were likely not counted since they either joined the ride after the point where the camera was mounted (what often happens on the Naked Ride is that onlookers get so overcome with emotion and excitement they end up disrobing and joining the fun!).

The 8,150 rider tally is considered a “high confidence, conservative number.” Prior to 2010, the only other count was an estimate by the Portland Fire Marshall of 5,000 riders. Naked Bike Ride volunteers have been wanting to get a more accurate count in hopes of going for an official run at the Guinness World Record. However, after learning that it costs $8,000 just to have the Guinness folks show up, that idea has been put on the back burner.

I wasn’t on the ride this year; but I suspected the turnout was huge when I heard that people had finished the seven-mile ride while there were still folks leaving the starting area. I also heard reports that the ride completely jammed up downtown streets for over an hour.

The buzz around the ride was especially strong this year due to the great weather and the attractive starting location. Unlike past years when the pre-ride gathering was in a vacant lot in an industrial area, this year the ride’s organizers collaborated with the Portland Art Museum to allow the ride to meet on the South Park Blocks in downtown Portland.

The result was a massive crowd that is by far the largest ever recorded for a naked ride in Portland. Well done everyone!

Fantastic! 73 minutes sounds about right. Mrs Dibbly & I live near the Art Museum and could hear the participants until 11:15 or so.

any site i could find that 73 minute video/?

While I liked the pre-ride gathering in the park blocks, I found the start this year too much of a bottleneck (with crowds and two quick turns), which strung out the ride a bit too much for my taste. But it was a big ride, no doubt!

You posted another NSFW picture on the front page. I thought you’d said you’d stop doing this.

The only thing I see in that photo is breasts, and I apologize if you feel that in this patriarchal society that mammary glands are nasty and vulgar.

I also want to know what size monitors all you work browsing people are using! Those teets are barely bigger than sz 12 font on my screen. You’d be surprised what shows up in my temp file history from things that you never even “browsed” as well, just from the img file being in the website server or from an advert. All the unintentional smut will blow your mind. Have fun browsing at work.

the thing is, when you take 5 or 10 min to study a pic for any potential offensive skin that might get you in trouble with your boss you probably should be fired. http://bikeporntour.blogspot.com/2013/06/willy-wonker-and-obscenity-factory.html

BIG THANKS to the volunteers involved in getting a high-confidence tally. No small task. You rock!

Today’s numbers are much better thanks to a dedicated crew of volunteers who filmed and counted for the last couple years. Now that I’m not really involved in the actual event, I feel it’s totally not self-serving to say that everyone should give a great big round of applause to the tireless volunteers like Chris, Meghan, Halley, Steven, and about a dozen others (sorry not to name everyone!) who make this ride not only possible each year, but an outstanding example of how to organize and accomplish an event of massive scale with very little formal training, organization, or guidance. This crew learned most of it from the ground up, and many have been involved for quite some time. They are, simply, rock stars.

I remember being at the volunteer booth 2010 (as I have been 2009, 10, 11 & 12) and kept getting volunteers coming back throughout the night saying”it’s 7000″ “it’s 9000” “it’s 1000” “it’s 13000” and being like “where are you getting these numbers??” Afterward, when we were able to sit down and go over our photos and videos and come up with the more confident numbers, of course it’s going to be lower, but when you’re in the heat of the moment, it’s very easy to get carried away with the veritable endless sea of people.

Also Matt, thanks for the credit this year, but while I was able to assist in the pre-game show, I was benched for the night of. There is months of effort put in by volunteers who have a passion for bike fun! And the thing is that when I think of planning out naked events, I think of a bunch of weirdos. Then I think of the people that I’ve hung out with for the last several years to plan this event and we are unfortunately very normal.

I hope that last bit didn’t come out wrong. I meant – not to be afraid to volunteer for this event or think we’re a bunch of weirdos – because most every day we’re sadly pretty generic (extraordinary, awesome) people just having bikey fun.

2013 I was the Naked Spartan, just my helmet, backpack, shoes and a smile and was my first time riding. I thought the whole thing was really well done, a fun time, thanks to all who help organize and put this on.

Hope it doesn’t start from the Park Blocks this year again. Honestly, it was note like the World Naked Walk for the first third of the ride. Most spectators were duly unimpressed. It’s supposed to be a ride, not a trudge!!