NYC advocates get political with launch of ‘StreetsPAC’ 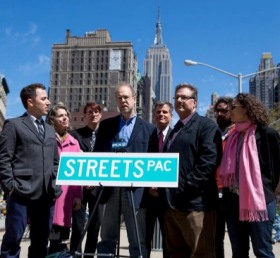 The latest enviable livable streets advancement in New York City isn’t another excellent bikeway or public plaza project: It’s StreetsPAC, a lobbying arm for activists aimed at flexing political muscle for the cause. Launched with a press conference yesterday, StreetsPAC feels like a natural development for a city that has the most mature livable streets advocacy ecosystem in the country.

Here’s how they define their mission:

StreetsPAC is a political action committee dedicated to improving the safety, mobility and livability of one of New York City’s greatest assets: its streets. The space between buildings, including sidewalks, roads and plazas, account for the majority of all public space in the five boroughs, and are a precious resource to be used and enjoyed by all.

And lest you think this is some rag-tag group of grassroots activists, the list of founding board members is as impressive as their mission. It includes several names that might sound familiar to some of you including Aaron Naparstek, the founder of Streetsblog and Doug Gordon, a TV writer and producer who also writes the Brooklyn Spoke blog.

StreetsPAC will focus on garnering support — both in terms of voter turnout and campaign cash — for city council candidates that understand the necessity and value of safe streets where people can walk and bike in comfort. They’ve registered with the state and city as an official lobbying organization and they plan to make endorsements and write checks to politicians. Both the Wall Street Journal and Streetsblog reported yesterday that they’ve already secured $30,000 in donations and board member Eric McClure (a neighborhood activist who I met during a visit to Brooklyn last year) said they expect to get “well into six figures.”

While New York City has made amazing strides in recent years with the dynamic duo of Mayor Bloomberg and DOT Commissioner Janette Sadik-Khan, they have a lot of work to do (as evidenced by the non-troversies surrounding the launch of Citi Bike, ongoing lawsuits against bike lanes, and the ongoing battle for respect from the NYPD).

Portland has a similar group in Bike Walk Vote, but they’re a 100% volunteer-driven, grassroots organization. The potential is there, but they need more cash, a stronger agenda, and more powerful and sustained leadership to really make a difference. Maybe StreetsPAC, like much of what New York City has done recently, will inspire Portland to get off our laurels.

For more on StreetsPAC, check out their website and Facebook page, and read coverage of their launch from the Wall Street Journal, Streetsblog, and Atlantic Cities.

Thanks for covering this, Jonathan! I’m very excited to see this happening in New York. I appreciate the BWV feedback as well.

One interesting thing I noticed in the WSJ article:

“The PAC would be permitted to give up to $2,750 to council candidates, and more to citywide candidates. ”

That is, New York state has campaign finance limits and the city has a public financing option:

Given that in the lead up to the November elections both mayoral candidates were trying (more or less successfully) to follow self imposed campaign finance rules, I believe there is a fair amount of public demand for some kind of reform in that area.

Changing those rules could be a first step toward not just making grassroots groups relatively more powerful in an arena where some entities have more money than God (e.g. Nike, labor, health insurance, etc), but also and perhaps more importantly, making the contributions and participation from the everyday members of the general public more important to campaigns.

Thanks for the great coverage, Jonathan!

Jonathan, thanks for keeping an eye on what we’re up to in NYC.

This is how you do it. Get smart people with good political acumen and access to dollars to present a professional front. Notice that they have a well defined mission statement, stay focused on that mission statement, and don’t give themselves cutesy little titles like “tactical urbanists”?

They are adults advocating for livable streets and influencing those who can get things done, not fashionistas with too much time on their hands and too few ideas beyond stunts and themed happy hours.

And of course Seattle has had BikePAC for a while – Washington advocates should check us out!