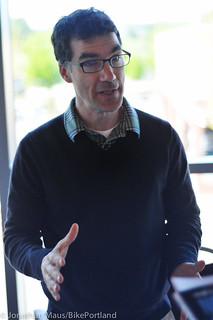 Following the tsunami in Japan in 2011, the idea of using bicycles in response to major disasters has quickly gained momentum around the country. Now the former Deputy for Planning and Preparedness for Multnomah County’s Emergency Management Disivion, Joe Partridge, has left his job at the County to launch Genevieve Consulting. One of the main focus areas of Partridge’s new company is, “integrating bikes and active transportation into emergency management”

You might recall Partridge’s perspective on bikes and disasters from an interview we published with him back in May 2011. Now Partridge is combining his expertise from 15 years of working in emergency management with his respect and appreciation of bicycles to take his ideas to the next level. Partridge had a booth at the Oregon Active Transportation Summit yesterday and is already making connections with government agencies and advocates throughout the state.

Here’s more about his new business:

“During a disaster, being able to move around or get out of town without the use of a car could be very useful. Disasters like Hurricane Katrina, Superstorm Sandy or the Fukushima showed that sometimes the best method to evacuate is by bike.

But there is more to including bikes and other forms of active transportation in an emergency management program than just recognizing that sometimes they are the best way to leave town in a hurry. Cargo bikes can be an important method of delivering emergency supplies when the roads are otherwise impassable. Buses and walking are methods to move people around a community efficiently and safely when private automobiles are unavailable. 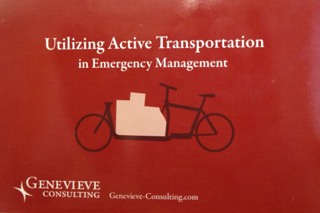 Partridge says he’ll also work on other specialty areas of emergency management but, “the active transportation piece is the most exciting to me.” (He also happens to be an avid competitor in ultra-endurance bike races.)

In addition to his new business, Partridge is putting together a grant program (in cooperation with Portland-based, livable streets non-profit Umbrella) that will, “will support individuals and small businesses that want to add an active transportation element to their existing disaster preparedness efforts.” Partridge says he’s still working out the details but the program will also, “Support innovative uses of active transportation tools like cargo bikes in disaster preparedness and response.”

This is a great development in the ongoing evolution of human-powered vehicles claiming a larger role in how cities respond to disasters. Good luck Joe!

For more stories about bikes and disasters, browse our archives.

That brochure title page is beautiful!
<random musing>
The first thing I noticed was the profile of the boxes; it kinda looks like the silhouette of a generic city’s high rise buildings.
Thought it might look cool to show a version of this image with buildings where the boxes are. This implies that in a disaster cargo bikes would carry the city.
</random musing>

Thanks q’Tzal. I have to give a shout-out to Kristin Wille at Quik Interactive for the cover design. She does an awesome job, and is also a local cyclist/commuter/racer! You can contact her at http://kwikinteractive.com/

OR…
The same basic format but instead of boxes:
5 gallon bottles of water,
First aid kits,
Tools for demolition and reconstruction.
Maybe a diamond frame bike towing a trailer with similar supplies or a litter.

Tsunami comes in like a flood from a broken dam then rushes back out just as violently.
If I had to design something to survive being in a tsunami it would be one of those emergency personal flotation vests that you pull the cord to inflate but made out of kevlar instead of nylon.