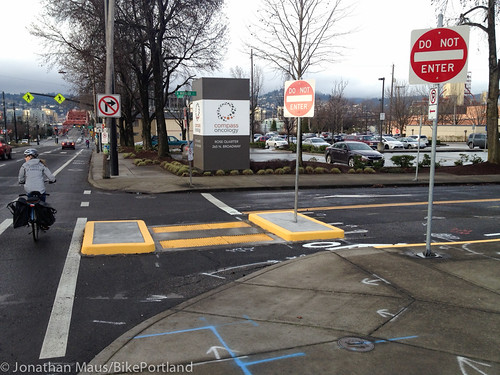 PBOT has made the prohibition of right turns onto N Wheeler from Broadway permanent.
(Photos © J. Maus/BikePortland)

The Bureau of Transportation has made the closure of northbound access on N Wheeler Avenue permanent. The move comes after a temporary closure that was put into place back in August in order to prevent right-hook collisions.

The closure of Wheeler came after intense public pressure on PBOT to do something that would stop the frequent right-hooks occurring at this intersection. Former Mayor Sam Adams, who made a habit of saying safety was his top transportation priority, stepped in and made the decision that people in cars would no longer be able to turn right from Broadway onto Wheeler.

PBOT crews have now made Adams’ decision permanent by replacing temporary barricades with median islands, new striping and signage. As you can see in the photos, people on bikes can still easily make the right turn (via a cut-out in the median and a bike lane symbol to encourage it) but it’s clear that people in cars cannot. 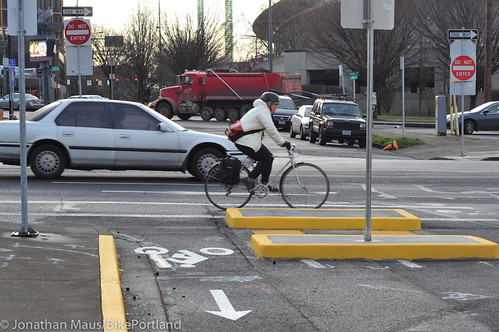 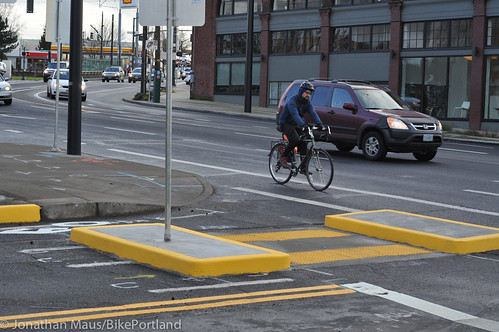 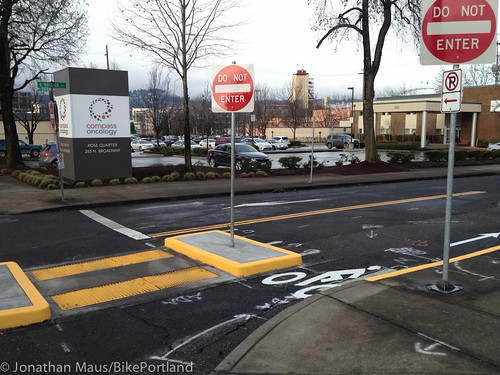 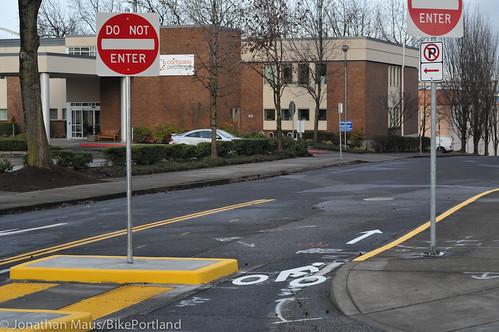 While this new infrastructure is a welcome addition, it is a tiny improvement in an area rife with danger and many other traffic issues. Thankfully, there could be more changes coming that will further improve bicycling conditions (and safety of all users). PBOT has applied for a $1.5 million state grant for a project that will: install a new traffic signal at Wheeler; narrow the width of Broadway by removing one left turn lane and extended the sidewalks on the south side, close an existing “slip lane” offramp from I-5 east of Wheeler (that causes much of the crossing danger); install a “signalized pedestrian crossing”, and more. If awarded, money from that grant wouldn’t be in PBOT coffers until 2018. That’s a long time to wait, so hopefully we see improvements before then.

Stay tuned for more coverage of efforts to improve traffic safety in this area.

Any update on Bob Huckaby and his bike licensing bill?

No news, but he was in the paper last week testifying against the Portland sick leave bill. Never get between Bob and a news camera….

Not much of an update, but I spoke to Bob several months ago and he said he’s staying the course and prepping a measure to be put on the ballot in 2014. Once his measure language is finalized, he’ll share it with me and then you’ll see it here on the Front Page.

Did a double take when I rode past the intersection this morning. Great to see how quickly this stuff can happen once someone gets a mind to do it. Thanks, PBOT!

> While this new infrastructure is a welcome addition, it is a tiny improvement in an area rife with danger and many other traffic issues.

Indeed! Let’s work towards a lot more fixes before 2018.

How is the campaign to force “bikers” to register their bicycles being waged by that guy who’s angry about this change going?

See the reply to the similar question upthread that had a link to the original story here at BP.org

How cool is that?!
Let’s have more of this kind of bold action, PBOT. Thank you!

uhm… shouldn’t there be a small sign under the “DO NOT ENTER” saying “Except Bikes”? I’m certain that Mr Huckaby would complain about people using the cycling cut out.

It is explicit with the bike “dude” marking in the cutout. That should be clear enough for legal clarity, but good point.

I was thinking the same thing… they put up a Do Not Enter sign even though you can enter with your vehicle… then they wonder why people riding bicycles don’t obey the other signs they put up… we’re left to think about whether our actions are safe, not whether they confirm to signs that may not apply to us or aren’t in our best interest…

Thanks, Jonathon! The Lloyd TMA approved funding for about 1/2 the cost of this project at our last Board Meeting. I’m glad to see that the improvement went in very quickly. I’ll share your article with our Board at our next meeting. Looking forward to my next ride past here.

was Bob Huckaby at that meeting to protest the action?

Looking at the pictures I would suggest some steel pipe bollards to make sure people don’t try to use the ADA ramp on the curb to bypass the obstruction. Should only need the one on the far side of the curb-cut to completely obstruct the turn for all non-bicycle traffic, and it would make a good place to put a beg-button for pedestrians to cross.

If ODOT is already considering this, I suppose it’s a done deal. But I haven’t seen how the slip road from I-5 (or from Greeley->5->Broadway) is a problem.

When turning onto Broadway, it’s intuitive to look left anyway, which gives you pretty good view of bicycle traffic and motor vehicle traffic coming down the hill.

It has never seemed particularly busy when I riding or driving through there.

I think forcing right turns from the offramp that uses the traffic signal @ Broadway/Vancouver will create a bigger problem for both bicycles and cars due to the acute angle a right turn from the light onto Broadway.

Do we know why ODOT wants to close this?

The intersection was a place where motor vehicle operators would commonly pass bicyclists, then turn right, resulting in serious accidents. With the road blocked, that can’t happen.

Jonathan wrote, “…people on bikes can still easily make the right turn (via a cut-out in the median and a bike lane symbol to encourage it) but it’s clear that people in cars cannot. ”

At the intersection of SW 2nd and Arthur there is a similar no right turn for cars from eastbound Arthur onto southbound 2nd. Northbound cars from 2nd can turn right onto eastbound Arthur. Nonetheless, I occasionally see cars turn illegally right anyway from Arthur to southbound 2nd. I would not be surprised to see that illegal move here at Broadway and Wheeler, too.

At the semi-diverters at Lincoln/Chavez and Clinton/Chavez, there are “Except Bicycles” signs posted below the “Do Not Enter” signs. PBOT may already be planning on doing that here.

Funny, no mention in the comments about how this kinda resembles the Dutch approach to intersections where cyclists can make a free right turn without conflict and allows for a pedestrian refuge to make crossing distance shorter. Great to see Portland leading the way with such innovations!

The turn does seem a little tight though, can anyone speak to that? Is there any trouble or awkward swivel one needs to make?

Now can we have these diverters, every ten blocks, on ALL our bike streets please?