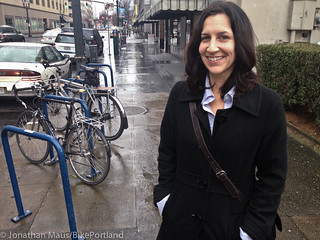 Yesterday I met April Economides, a self-described “green urbanist” who is growing a solid reputation for making bicycles — and bicycling — a more visible and respected part of doing business. Through her firm, Green Octopus Consulting, April works with business associations, advocacy groups, and government agencies to plan and implement bike-friendly business practices. She stopped in Portland en route to Eugene where she’s speaking and giving a workshop today thanks to an invite by the University of Oregon and the City of Eugene.

April, 37, seems poised to capitalize on the growing awareness that “bikes mean business.” That’s a term that emerged in Portland in May 2011 and has since ridden a wave of acceptance and high-profile attention: Research has proven the buying-power of bike-riding customers; bikes and business panels are common at transportation conferences; the idea of “bikenomics” has taken hold thanks to activist/journalist Elly Blue; and the League of American Bicyclists has made “Bicycling Means Business” the theme of the 2013 National Bike Summit.

April’s work in tying business to bicycling goes back to 2010 when she was hired by the City of Long Beach (where she currently resides) to create and manage the nation’s first Bike Friendly Business District. While education about bicycling as a transportation option is baked into Portland’s transportation bureau (thanks Active Transportation Division!), other cities aren’t as fortunate and having someone with April’s experience and outlook is invaluable. (That’s not to say Portland couldn’t use more bike-friendly business programs.)

In Long Beach, she worked with business improvement districts (BIDs) to create an informal merchant bike share. Each district purchased 2-4 bikes and a cargo bike. The bikes were stored at a participating business or at the BID office and any employee could check them out and use them for running errands, making deliveries, and so on. The program also included installation of bike racks, bike valet services, free bike repair, and a host of community rides to promote the various business districts. And there are other, more subtle things she implemented like making sure there are bike directions on company websites and putting a bike-friendly logo on shop windows.

“It’s not reinventing the wheel,” April said about her work, “It’s taking what businesses already do and squeezing bikes into it.”

“It’s not reinventing the wheel. It’s taking what businesses already do and squeezing bikes into it.”
— April Economides

April’s work in Long Beach lead to other jobs throughout North America. An invitation from the San Diego Bike Coalition to speak to the 18-district strong San Diego Business Improvement District Council led to creation of a 20-page plan on making them more bike-friendly. Now business leaders in San Diego are hopping on one of the 18 custom bikes purchased as part of the program and they’re lobbying for bike corrals.

What makes April’s perspective different is her background and passion for small business. She has an MBA and has worked as a staffer for business improvement districts so she’s not simply a bike advocate making the case to business owners; she’s a business booster who just happens to believe bikes are the key to Main Street’s survival. “I’m not only passionate about this because it’s getting people onto bikes, ” she says, “it’s also helping small businesses.”

According to April, the business case for bicycling is simple: “We’re traveling at human-scale speed, not surrounded by metal, so we notice businesses we’re passing. We can easily hop off, not circle the block for parking, and we can park our bikes for free.” What about that engrained dichotomy that bike access means less room for car parking? “Yes, the number one concern of business owners is they say they need more parking; but when you convert some of their existing customers from drivers to bicyclists, you open up more car parking and you alleviate those problems — or perceived problems.”

“The whole point is to make more short trips via bicycle instead of cars, and to make them into the business districts. Bike local, shop local.”

Sounds good to us.

Fun to hear about these efforts; this recognition of bikes as serious business.
The future of transport is human-powered.

Wow… April and her work are incredibly inspiring! It’s nice to see someone with business credentials drawing connections to the economic benefits of bikes, and the idea of BFBD’s is genius. Would love to see us implement these here in Portland (I can already imagine Alberta, Mississippi, Hawthorne, and even Broadway downtown as potential locations with relatively easy/affordable conversions).

Thank you for sharing this 😀

I was in Long Beach last fall and noticed that all the major arterials had nice wide bike paths. What I hardly ever saw though, were cyclists.

You are correct in your observation of Long Beach. To be fair, I’ve noticed a tad increase in bicycle riders, but nothing worthy of celebration. Btw, I ride everywhere in Long Beach, about twice a week. I’m pretty confident I have more miles ridden in Long Beach then most bicycle advocates in that area.

Unfortunately, April Economides works for Bike Nation, a bike sharing company in Southern California. Bike Nation is part of a bigger company that deals with advertising. Their primary goal is their own financial gain rather then the livability of our streets. I prefer to support companies who are the exact opposite. Bike sharing is detrimental to the long-term goals of the livability streets community. 2013 will be the beginning of the end of bike sharing regardless of any success stories reported by cities who have already implemented a bike sharing program.

edit: “….companies and people who are the exact opposite.”

Care to elaborate? Bike sharing is a mobility tool, like mass transit. In a certain sense mass transit, bikes, and cars all have a certain tension with a purely walkable community where are the necessities are easily walked to. It’s pretty clear Americans can’t be satisfied with just a walkable community and want the freedom to go other places. Bike sharing works really well for those short spontaneous trips. Where do you see it failing?

For me to answer your question, I would have to reveal something that I’m not ready to reveal yet. It’s kind of the same reason I believe autonomous vehicle technology, such as the one developed by Google, will also be detrimental to the long-term goals of the livable streets community. I would like to discuss this further, but I just don’t have time right now, may be some other time in 2013.

Please. We live in a capitalist society, and plenty of good things happen because someone believes they can make a dollar doing them.

“Yes, the number one concern of business owners is they say they need more parking; but when you convert some of their existing customers from drivers to bicyclists, you open up more car parking and you alleviate those problems — or perceived problems.”

I don’t think that’s the right way to look at it at all. When you replace one car parking space with a bike corrall, you add parking spaces for 8-10 customers. 8-10 customers who are likely to spend more money in a given month than their car-driving counterparts, and who have a higher density of parking available closer to your storefront.

Freeing up car parking is all well and good, but framing it that way just gives false credence to the idea of the primacy of motorists over other shoppers.