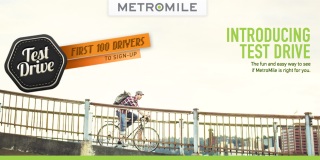 MetroMile, the pay-per-mile car insurance company that set up it’s national headquarters and launched in Portland back in December has an offer for BikePortland readers: The first 100 people to sign up for a “Test Drive” of their service get a free month to see if it’s a good fit. The basic premise of MetroMile is that if you drive less, you pay less, so their insurance is a great complement to the growing number of “low-car” Portlanders.

Regular auto insurance premiums are based on an average expected number of miles driven; but my household (and I expect many others) drives way less than the average. The result is we end up paying more than we should. The MetroMile system tracks your mileage and charges you based on how much you drive. Here’s more from CEO Steve Pretre (via a BikePortland comment):

“Our pricing is not based on where, when or how people drive. It’s simply the number of miles driven times a set rate per mile, plus a low base rate (because some things do happen when the car isn’t being driven). We do capture GPS data to map trips so people can look for patterns to lower their driving, but you can turn that service off at any time if you want. For those of you thinking about the occasional road trip, we cap charges at 150 miles per day specifically to give people that freedom.”

When we’re not biking, my family and I get around in Honda mini-van. Beyond the occasional road trip, it spends most of its time parked in front of our house. I’ve been curious about the MetroMile insurance, but haven’t switched from our current policy. I figured I’d sign up for this Test Drive just to see what’s like. The first 100 people to join me will get a “Metronome” device to plug into their car for 30 days. We’ll also get access to a profile page on the MetroMile website that show us all types of trip data and other cool stuff (including being able to vote on other, yet-to-be-released features). 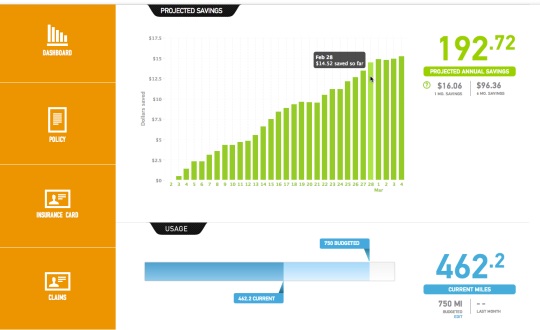 The first 100 Test Drivers selected by MetroMile — and anyone else who wants to join us — will then be invited to a big party on February 13th at Union/Pine (525 SE Pine Street). There will be food and drinks, a short chat with MetroMile CEO Steve Pretre (I’ve met him a few times, he’s a neat guy who thinks data can revolutionize just about anything), and I’ll be there as well.

To sign up for the Test Drive, you’ll have to fill out some basic info on the MetroMile site.

Too bad they, for some dumb reason, only work on cars 1995 or newer… that eliminates our 100% biodiesel fleet from consideration. Not sure why they wouldn’t be able to track mileage with a GPS unit/accelerometer or some such. Oh well, too bad for them.

Oh, come on… Are you also upset your iPhone doesn’t connect to your dot matrix printer??

Excellent! Another excuse not to buy an iPhone.

All you need is a “COMBO Bluetooth Printer Adapter for USB or Centronics Printers Class” (http://www.usbgear.com/USBG-0260.html) to hook to that old OkiData 220 and you can print from your iPhone or Android smartphone, easy peasy.

I have to admit – the pay by mile model is intriguing.

Shucks! I just signed up for MetroMile last week! Should’ve waited and gotten a free month. 🙂

Hey Gabbi, welcome to MetroMile! We’re inviting current customers also! You should be receiving an email with details!

I tried signing up, but once I put in my SSN / etc, the rate jumped up 50%, and was no longer competitive with my existing insurance. Perhaps this will work better or others, though!

I’d be willing to try this. I mostly use my car for longer trips to go hiking or visit family but rarely use it in the city and was wondering how this would average out over the course of a month. Of course, February would be an underestimate – most of my winter month pursuits stay close to home…close to the bar…so it would be nice to run this trial during the backpacking season.

Yes, get a free month of insurance for your drunk driving home from the bar.

Unfortunately, this is not an offer for free insurance. Rather, it’s an opportunity to test out the technology portion of the service. You’ll start gathering data about your car/driving habits and see a report on your milage and trip data.

Riiiight…so, you kind of missed my point. I like to use a car to get out to the mountains – not around town or to get home from the bar. Thx for your concern.

Sad that my old Mercedes doesn’t qualify for this.
I was just about to sign up!

I was going to try this a while back, but I have a 1994 car and it won’t work. Too bad although I did look at how much it would cost here and my current and did not seem too much different. Plus, I would lose the multi-line discount for the house.

If I drive just 188 miles in a year it breaks even with my current insurance. I work from home and don’t drive all that much, but this service definitely doesn’t work for me.

I guess I should’ve looked at my actual insurance costs before posting the first two times. At 2000 miles a year I’d save over 50% compared to what I currently have. Going to try this out.

re: Older cars. The OBD-II port was made mandatory in 1996 and that’s where the Metronome device plugs into. There’s potential that in the future we’ll have a non-OBD-II workaround but right now we can only offer this service to 1996-newer car owners.

@MetroMile, from the FAQ at your web site:

Is the Metronome device optional?
Nope. It must be plugged in to your vehicle at all times so mileage can be accurately measured.

Can you elaborate on this a little bit? The OBD-II port is used by a variety of tools and devices. Does the Metronome consist of a pass-through connector, or is it going to monopolize my OBD-II port? What if I or my mechanic need or want to disconnect it for some engine monitoring?

Also, you say the GPS-based trip tracking can be disabled, but I’m not seeing it stated anywhere what data beyond mileage information is gathered by the Metronome, or what guarantee customers have the data being gathered won’t change in the future. For instance, obviously time records are kept so you know when it’s a “new day” of driving. Well, how precise are those time records? If Metro Mile were subpoenaed what records does Metro Mile store (this is distinct from the Metronome device itself) and for how long?

Back when this insurance first came out, I plugged all our numbers in (2011 car, <4000 miles/yr) but got a rate that wasn't any better than our current rate. We might try this anyway, just to see if the numbers I used were somehow wrong.