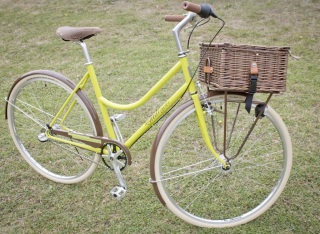 Made in Portland for Anthropologie.
(Photos: Signal Cycles)

North Portland based bicycle makers Signal Cycles‘ new “picnic bikes” will soon be available for sale at Anthropologie.com. The national retail chain contacted Signal after several months ago after learning about the “Fremont” bike they created for the Oregon Manifest Design Competition last year.

Signal Cycles co-owner Matt Cardinal says a buyer from Anthropologie was interested in a picnic-themed bike and it was an idea he and his partner Nate Meschke had already been thinking about. The bikes feature a 3-speed rear hub, a large front wicker basket, a step-through frame, and a hub-powered front light. 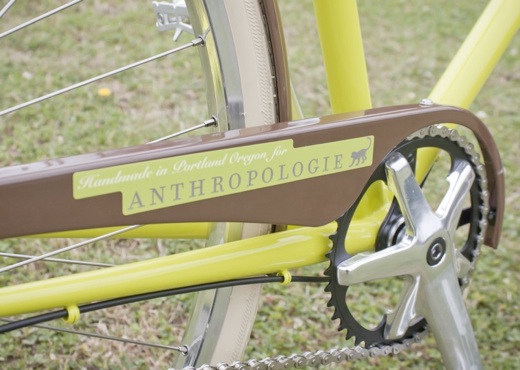 The bikes were fabricated at the Signal shop here in Portland and they also feature hand-built wheels by locally-based Corsa Concepts. Cardinal says Anthropologie plans to sell the two bikes they’ve purchased for $6,000 a piece (got to love that retail margin huh?) and they plan on using them to decorate their stores for the holiday season.

This isn’t the first bike Anthropologie has sold. They also sell bikes from Linus on their website and they even list a $10,000 rickshaw. And Signal isn’t the only Portland maker you’ll recognize on their website. They also sell the fantastic leather saddle bag made by none other than Geoff Franklin of Walnut Studiolo (who many of you might recall from his attendance at BikeCraft).

For Signal, the project was a great chance to further their experience into making bikes in more of a production model, instead of a one-off custom approach. Cardinal says the picnic bike project was similar to how they developed their Saltzman model; a production bike that comes in standard sizes and starts at $3,600 all built up.

Once Anthropologie sells the two they’ve bought, Cardinal says Signal will likely sell a very similar model direction (and I assume, at a much more reasonable price).

See more photos and learn more about the project at SignalCycles.com.

This reminds exactly of the bicycle preferred by certain women described in “Stuff White People Like” 🙂 http://stuffwhitepeoplelike.com/2008/02/10/61-bicycles/

The basket’s full of cash, then, right? Nice monkey.

Nice idea to have a local bike manufacturer get some visibility for one of its bikes. Just the bike for people that love the droopy noodle frame style. The unique paint color choice brings that out even more. Quite the fashion accessory for the Anthropologie customer with $6000 to buy the bike.

Related in style, the vibrant green bike designed for and sold last year in Kate Spade stores was also nice; a lot less money, so the build quality is likely to be considerably lower than that of the Anthropologie bike.

I suppose the sleekness of a basic double bar top tube mixte was maybe more modern than the company was looking for. Some of the graceful loop variations on the basic mixte design are also very nice. Never can tell when we may see on the street, happy buyers of this $6000 bike.

the perfect steed for a tweed ride

Its nice that Anthropoligie likes to sell $6,000 bikes labeled “hand made in Portland OR” but they could care less about promoting hand made in Portland or our Oregon ideals. This is just a marketing ploy. It smells like Teen Spirit to me. The owner of Urban Outfitters, their parent company has given $13,500 to Rick Santorium’s political campaigns.

These are the same people with the Free People clothing line. They look like hippie clothes but they’re made in Chinese sweat shops. And they sell for ridiculously silly prices.

How is that any worse than tens of thousands of properly liberal Portlanders carrying the latest iPhone? Those are made at FoxConn factories in China where the employee safety program consists of putting up nets to keep suicide jumpers from dying.

ALL retail and consumerism is a marketing ploy.

“…The owner of Urban Outfitters, their parent company has given $13,500 to Rick Santorium’s political campaigns. …” esther c

There’s a bunch of stuff online about Urban Outfitters CEO Richard Hayne’s political contributions and position. Here’s a link to one piece:

Apparently, it’s he, and his wife that have made those contributions privately as their own personal viewpoint, not as an expression of the store’s outlook on American society or politics. He’s a businessman, who has perhaps from time to time, found the nature and character of the successful business he’s helped to create, to be somewhat at odds with his own personal views. I just read the politifact story, so I wouldn’t know other than rumors offered in that story, and suggestion that he and his wife aren’t very open to discussion about their personal political views.

About the $6000 bike, I suppose I’ve mainly been kind of curious whether anyone really would find the Anthropologie bike’s design and build sufficiently attractive or otherwise appealing, to spend that kind of money, or even half that amount for the bike. I don’t mean to be unappreciative of this particular bike having been hand built, or that a local builder is getting some visibility, but for the use it’s likely to be put to, about $300-$600 could probably buy new, an attractive, decent machine built bike of similar design.

simply put, why would you buy a bike at Anthropologies? Especially a $6k one. Maybe you dont care about service after a sell, etc. But really, it just seems extremely odd, especially when you could get this bike from Signal direct, probably get a better price and be taken care of after the sell. Not to mention youd more than likely end up with a bike that fit you better. I guess we’ll see if anyone plops down the dough…
As for quality vs price. I understand the frame and its accessories are pretty expensive as having been built locally. I dont argue the reasoning or the price behind that at all. However, the components are mediocre in quality. square taper crankset, a $25 Shimano ST BB, single ring, no derailleurs, an affordable internal rear hub with a single inexpensive front hand brake. If you paid Matt what he wanted for the frame/accessories and paid full retail for the components, Im sure youd still be well under $6k. Its great Matt got this gig, but go see him yourself if you want the bike. Im sure you’ll end up better off in every way and you’ll support a local crafter not a retail chain that has no passion for it.

Would of expected better cable routing for the money…