When it comes to making a city safe for cycling, it’s often very minor things that can make the most difference. A pothole, a poorly installed storm drain grate, overgrown vegetation. Or in the case of one very unlucky person, a chain strewn across the road.

On Wednesday night just after 7:00 pm, a man was biking on Northeast Holladay Street under the I-5 overpass near NE 1st Avenue when he was suddenly tangled in a chain and thrown head-first over his bars. The impact led to significant injuries to his arm and both wrists. He also suffered minor impacts to his head, although he (thankfully) was wearing a helmet.

As you can see in the image the rider sent, the chain was nearly invisible and there was no forewarning it was even there. The location is Rose Quarter Transit Center where multiple light rail and bus lines converge. There’s also a major bikeway that runs through the transit center. And although this section of NE Holladay isn’t as popular for bicycling as nearby NE Multnomah, it’s still a designated bike route.

Someone made a huge mistake by putting up this chain! This is a public street that might have been closed for a special event (it’s adjacent to the Oregon Convention Center), but that event was well over before this crash happened. This is a good example of why transportation agencies must pay attention to detail — especially because a mistake that would be a mere inconvenience to some road users can be catastrophic for others.

I’m happy to know that the rider in this case has done his homework and is seeking legal representation.

Are you sure it’s public, and not controlled by TriMet? But ideally, there would be warning stripes on both sides of the metal sign

I don’t know what “controlled by TriMet” would even mean. It’s a public street. TriMet might “control” Max tracks that aren’t part of a street, but this is the public ROW. TriMet should only be able to close it with the city’s OK, and comply with any city regulations about signage and warnings of the closure.

It would mean that they consider it part of their property where their regulations are in force, as in part of the transit center. Remember that the bike lane on Wheeler next to there is a recent creation and before that bikes were totally banned.

Trimet is public and so are all the spaces it controls.

Chris I
Reply to  Jd

Sure. Go ahead and walk down the tracks along I84 and see what happens.

No, Trimet is quasi Governmental. You don’t vote for the Trimet Board.

And reflectors, they’ll have a good lawsuit

That chain’s come and gone for a long time, usually around when trimet parks work trucks there. It seems like one of those “the way we’ve always done it” kind of things that’s never had a clear process. It’s easy to find a bit of history in the google street view timeline, especially since it’s visible from multiple streets with different street view histories. Here’s one from 2011 where the chain with a sign wasn’t available, so they just tied little scraps of caution tape to whatever chain was on hand:

Cut and recycle it ♻️

Someone deserves a payout on this mistake.

At 7 PM, lots of daylight, very visible chain and shiny metal sign. What was the rider looking at?

I’m kinda wondering about that myself. Does the photo show the back side of the sign? Is that the side the rider was approaching it from? What does the other side of the sign look like? When I first read this I was all ready to take up arms for the cyclist. But after looking at the photo and not knowing the answer to those questions, I’m not so sure. I hope there’s some follow up.

JM has a strange tendency to jump from reporting to commentary – as in “Someone made a huge mistake in putting up this chain!”

Well, the cyclist who ran into it certainly feels it was a mistake, but what if that chain stops motor vehicles from cutting through a ped/bike area and injuring more peds or cyclists?

BP does a valuable service in pointing out these problems but I wish it were more circumspect about causes, responsibility, and underlying conditions. What is the best infrastructure for keeping cars out of public spaces? Should planners assume that cyclists will ride *everywhere*, or should cycles stay out of some pedestrian areas? These are good questions for responsible journalists to answer.

I don’t think it’s “strange” but I do acknowledge my style isn’t like some more traditional, classically-trained journalists. I also think my statement about the chain is factually accurate. It’s a huge blunder in my opinion to leave that chain over a public street that people would have every expectation would be open at that time. And yes I realize when I mix a statement like that in with a news story it can hit some folks off-guard. But keep in mind this site began as a blog and my style has always been more opinionated and blurs the news/opinion line more than other journalists.

As for considering those other questions. I’d love to! The thing is, the current way I run this site doesn’t give me the luxury of spending as much time on every story as I might like to. Unlike other news outlets where a writer might have a day or two to consider a story, I write most of my stories very quickly. A few hours for one story is a long time for me. I realize that’s not always ideal, but that’s just how I roll.

Is it a “huge blunder” to keep out cars and other traffic though?

And your words arent “factually accurate”

2. “No forewarning the chain was there” is also not true. Stripes on road stantion, metal sign affixed to middle of chain. And really no good picture of the surrounding signage and area

This is an opinion piece that rides on a factual event.

The picture shows the direction of travel on an eastward 1-way road.
The other side of the sign, which people driving the wrong way on a one-way road would see, had angled interleaved yellow & white reflective stripe pattern. Thus, the bicyclist riding east in the correct direction on a one-way road, only saw what was in the picture included in this post report
This after turning left about 150 feet to the west of of this confluence of green bike lanes as seen in attached pic from maps.
The bicyclist had just turned east off of wheeler (was heading south on) onto Holladay, which is the eastward one-way road just to the south of the Rose Max Transit station under the i5. 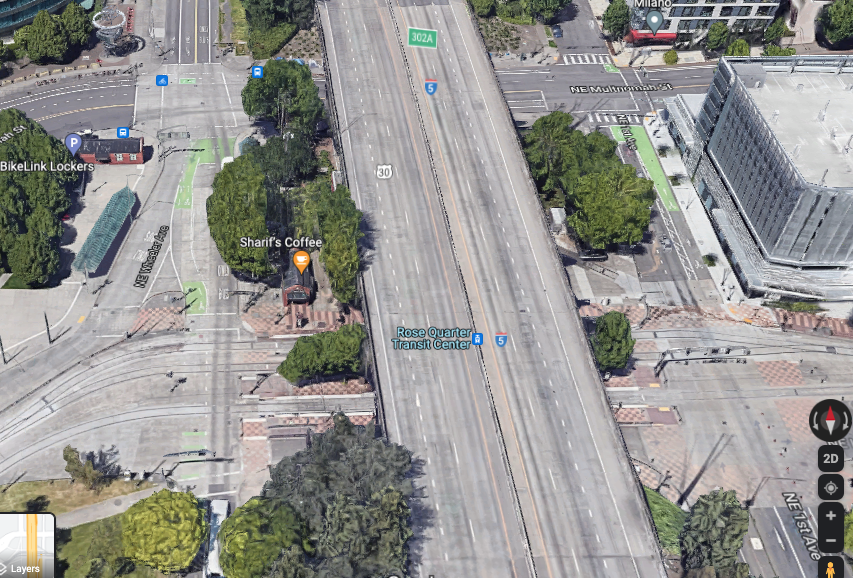 Your argument is just silly. He didn’t hit the stanchion, he hit the chain. The sign has nothing on the visible side except graffiti. Chains and barriers need high-visibility markings if they cross a right of way (even if they are temporarily blocking that right of way). This is for the safety of all road users: pedestrians, cyclists, and drivers. Good design makes roads safe for all users, not only the most alert, sharpest eyed, able-bodied users. Blaming the victim is unhelpful.

It should have colored pieces of cloth tied on the sides, to make it clear that there is something strung across & not just in the middle. It’s not a super thick chain, you you could totally miss that.

#WorldBollards would have been safer

Very visible if you’re close enough, and you aren’t going too fast, and if you have good vision.

Chris I
Reply to  Serenity

Free-floating sign. Seems to violate the laws of physics.

Serenity
Reply to  Chris I

A chain is just not a great solution here for a lot of reasons. I believe Trimet owns this section of street. It may have been a public street before the original MAX line went in, but Trimet clearly controls the space now. They can exclude road users from sections of their facilities for any reason.

If they want to exclude all users, they need to install full removable barriers at the east and west ends. If the goal is just to prevent auto traffic, they could use removable bollards. This seems like the ideal solution, as it would allow cyclists, scooter users, etc to use the space. A chain isn’t going to stop a determined driver, and it’s a hazard to other users.

There’s a case that sets a precedent for this when a cyclist recently was paid $300,000 by city and Metro in similar incident. https://www.google.com/amp/s/www.oregonlive.com/portland/2022/04/portland-metro-to-pay-300000-to-cyclist-who-rode-into-wire-strung-across-bike-trail.html%3foutputType=amp

Probably because this happened in daylight, the discussion about visibility focuses on visibility in daylight. Personally I’m not surprised someone missed seeing the chain, especially with dappled light, focusing on traffic ahead, the chain being in an unexpected place…

But TriMet itself provides the best argument that this chain was wrong and dangerous, in the form of large, high-contrast striped, reflective strips plastered all over every one of the several bollards on both sides of the street:

The reflective material has no purpose except in the dark when people are using headlights, so TriMet’s using it proves that TriMet 1) expected people to be moving through here in the dark, and 2) knew that the bollards could easily be overlooked unless they were covered with large amounts of reflective material. Otherwise, there’d be no point using it.

This happened in daylight, but TriMet is lucky it hasn’t happened at night. And the reflective material proves TriMet agrees that un-reflectorized obstacles are dangerous here at night.

So then TriMet’s argument is, “You could blame us if it happened at night, but not in daylight”. At that point you see that the reflective material on every bollard is large, high-contrast red/white or yellow/black stripes. That helps visibility at night (not as much as reflectivity) but its real value is in daytime, and TriMet’s use of high-contrast striping on every bollard proves it knew that obstacles without it could be overlooked even in daylight. At that point TriMet would have to argue that a large bollard could be overlooked, but not a narrow chain…

While I agree that this chain is an unsafe installation, I completely disagree with this opinion (which was stated as a fact): “As you can see in the image the rider sent, the chain was nearly invisible”

Plainly visible to me; nowhere near invisible.

There is a sign on the middle of the chain…pretty hard to miss that big sign floating in the middle there…seems like the cyclist was negligent.

I remember that part of Holliday being chained off since the change in the transit center when the “moda center” part of the thing was first built back in ’93 or so when I first moved to town. I don’t recall it ever being readily, regularly available for anyone (but the occasional pedestrian to use) to ride or drive thru.

Given it’s been 30ish years & how many incidents has it “caused”.. Yes, while even one is too many; aren’t there far more pressing, far more dangerous, issues that need to be addressed?