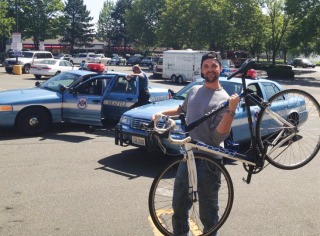 It’s been a good few days for bike lovers and a bad few days for bike thieves. In the past week I’ve come across three local bike recovery stories that deserve your attention. Each one of them shows the power of social networks and a community knows how — and cares enough — to use them.

The first is a wild saga six years in the making. As reported last week, Justin Labo, who had his bike stolen from a storage unit in San Francisco, found his bike on Craigslist in Portland. Unfortunately, after trying to contact the seller, the bike was sold and vanished again. A massive social media campaign was launched by Justin’s friends and lo and behold, the bike was found on Saturday. The remarkable story of how it all happened has been documented by Jenny Oh Hatfield.

“So what have we learned from this?” she wrote on her blog, “I think most importantly, the biggest takeaway is to never give up; you never know when you may find your stolen bicycle. It may take 4 days or 6 years, but keep the faith.” 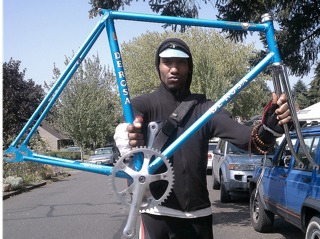 Our next recovery story is about a bike that was stolen in Portland and recovered yesterday up in Seattle (a trend that might be on the rise). After discovering his bike on a Seattle Craigslist post, Jake Gillum and his friends worked with local police to organize a sting operation. It worked! And the thief not only got a felony; but Jake got his bike back and a cool photo of him and the cops (at top of this story).

Now Jake says he wants to empower other victims to stand up for themselves and get their bikes back too. The guy who stole his bike was caught with two other bikes and Jake is sure they’re also stolen. Check out his post on Reddit and view these photos to see if they belong to you.

UPDATE: Jake has just posted the amazing video of him confronting/chasing the thief and then the police arresting him… 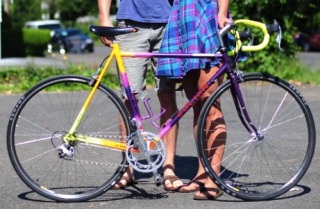 This gorgeous Colian is back with its owners.
(Photo: Johnnie Olivan)

Our last story today comes from our friend and local bike maker Johnnie Olivan of Rejuiced Bikes (profiled on BikePortland last year). His partner, Paige Common (who operates the “Eatin’ Alive” bike-based foot cart) had her custom Colian road bike stolen on July 28th. Johnnie, Paige and their friends posted flyers and scanned the Web to see if the unique bike would turn up. It never did; but on Friday they got an email with some great news.

Someone had found the bike hanging from tree limbs on the bluffs off of Willamette Blvd in North Portland. The BikePortland Stolen Bike Listings played a big role in getting this one back. The good samaritan found the bike, went home and Googled, “stolen bike colian” and the BikePortland listing — with Johnnie’s contact information — popped up. “I can’t believe it’s back!” says Johnnie.

It’s so encouraging to hear that people are getting bikes back. I’ll go out on a limb (without any statistics to back me up) and say that Portland recovers more bikes (per capita) than most other cities. We have the three main ingredients necessary for people power to flex its muscle against bike thieves:

Nice work everyone. We may not get them all back; but it’s good know that at least there’s hope.

— For more recovery stories and other coverage of bike theft, check out our archives.

When someone stole my bike, it was like the had stolen my dog.

I later saw it going down outer SE Powell, but what could I do, I couldn’t jump the girl riding it, she probbly paid someone and thought she was legit.

You can call the cops, prove it’s yours, and get it back. If she didn’t know, then she doesn’t go to jail.

Jenny Oh Hatfield’s weblog chronicle of the social media pursuit and recovery of the stolen De Rosa is great reading.

It’s awesome people are getting their bikes back!

Not long ago, there was a PPB press release saying they had recovered a bunch of stolen bikes and components from a homeless camp on the east side of the Hawthorne bridge. Just yesterday, I saw a man with a Chariot bike trailer (~$600 new) loaded with at least 3 nice ($1000+) looking frames ferrying them into that pirate boat/dock thing that’s been anchored near the Hawthorne bridge for months. I’m guessing the stolen bike ring has been moved onto that boat. I’ve contacted the police several times when I see expensive looking bikes and components where they don’t seem to belong. I hope they look into that boat. More bikes might be recovered.

I agree – that pirate ship moored near the Hawthorne Br looks very sketchy although I doubt you could fit many bikes on that boat.

Probably preaching to the choir and all that, but here goes… can’t stress enough how important it is to –

1) write down the serial number of your bike! (found under the bottom bracket)

2) take lots of photos of your bike! (both close-ups and photos of the whole bike)

3) write down things about your bike. what size it is; what changes you have installed on it; any weird quirks; what type of tires it has etc etc

4) make sure you have at least one photo of yourself with the bike! (as proof it is yours)

5) lock up your bike properly! pretty sure half the bike thefts out there could be prevented if folks stop using those pieces of dental floss (sorry, ahem, cable locks) to lock their trusty steeds. Always use a good u-lock. ALWAYS! your bike will thank you!

I’m going to add a #6 here: use *two* U-locks. (In Jake Gillum’s case he was using a Kryptonite U-Bolt that was somehow defeated. )

It’s a good idea to email the serial number and photos to a Yahoo! or Gmail email account. That way you can call them up from anywhere with Internet access and the email has a time stamp on it.

Now if we could only get a lead on that large haul of 29 bikes stolen from the Vancouver nonprofit Bike Clark County. On an unrelated sidenote, everyone should pick up a copy of the August 9 issue of the Portland Tribune to read a great front page article on Jonathan and BikePortland.org.

How long ago was this? There’s a sketchy looking house on the south side of West 39th st. between Grant and Harney that was selling a large number (about 10-15) of kids and adults bicycles. The front yard looks like a permanent yard sale when you drive by. You can’t miss it.

I just checked the previous article. The bikes shown in the photo are all identical (Silver MTX 225). This was not the case at the “yard sale” I mentioned above. All the bikes there were completely different from one another, and both kids and adult bikes.

My bike was stolen in May, 6 days after I bought it. I posted it in BikePortland, and a few days later it showed up – sans wheels – at Community Cycles. A homeless guy living in a van emailed me about it. Apparently the wheels are less traceable than the rest, and easier to hide. I’ve heard that this has been happening a bit… Community Cycles says they’ve been having good luck selling wheels and tires lately.

I think the bike owner was lucky he wasn’t hurt when he confronte this guy and I wouldn’t recommend people confront suspected thieves in this manner.