(Note: This article is written by Jack Blashchishen, a University of Oregon student who grew up Portland’s Parkrose neighborhood.

East Portland is home to some of the city’s most dangerous streets, and residents have been calling for better active transportation infrastructure for years. One group of people who have suffered from this poor infrastructure in east Portland are Slavic immigrants from the former Soviet Union, some of whom are required to walk on busy streets because of religious practice – but until recently, have had to take big safety risks in order to do so.

I am from this community. I grew up in the Parkrose neighborhood in east Portland, in a Russian-speaking community centered around the Church of Christians of Seventh Day located just off NE 102nd Avenue and I-84. This church has around 700 members, mostly from Uzbekistan, Ukraine, Moldova, and Russia.

One of the core tenets of the religion practiced at this church is to treat the Sabbath – every week from sundown on Friday to sundown on Saturday – as sacred. Driving is expressly forbidden on the Sabbath, so members of the church have to prioritize living close enough to walk there.

Every week, hundreds of people walk to the church, some who live within the relatively cozy Parkrose Heights neighborhood. Others travel farther and have to cross I-84 or I-205, with some people coming from as far south as Division Street and as far east as 136th Ave. 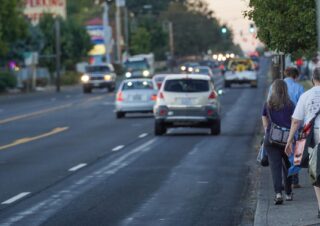 Some of these people are pushing strollers, some are elderly and many are children no more than three feet tall. Unfortunately, the streets in these neighborhoods are some of the most dangerous in Portland, with many lacking sidewalks or enough protection for people mere inches away from high-speed car traffic.

Although churches have had an enormous role in shaping cities in the past, serving as architectural monuments as well as gathering places and town centers, today they occupy a pretty small role in American cities. Rather than being neighborhood centers, they tend to conform to the built environment around them. This church is adjacent to I-84, a mere block away from an exit ramp, in a neighborhood without sidewalks.

My childhood is full of memories of walking to church with my family along some of the most dangerous streets in Portland, often taking quite a long journey, passing around blind corners in the rain or at night. When my parents immigrated to Portland from Tashkent, Uzbekistan in 1998 when I was two years old, they moved to this area because it was the part of the city they could afford to live in, not because they wanted to live in an area with too few sidewalks and too many cars.

Bicycle infrastructure benefits pedestrians by creating buffers between us and car traffic.

Many of the streets these churchgoers travel on, including 102nd Ave, 122nd Ave, Halsey and Glisan Streets, are part of Portland’s High Crash Network. There were 258 total crashes on 102nd Ave, the street I traveled on to get to church, from 2012 to 2016, three of them fatal.

In recent years, the Portland Bureau of Transportation has put work into making east Portland safer for people walking. These projects have benefited people in my community by creating more distance between people’s bodies and fast-moving traffic, as well as slowing the traffic by removing automobile lanes and adding marked crossings. One project that has been particularly impactful has been the NE 102nd Ave Corridor Safety Project, which BikePortland looked at in detail in 2019.

Until the summer of 2019, NE 102nd Ave had seven vehicle lanes, two in either direction with a center median, as well as parking on both sides of the street in most places. There were no bike lanes and some sidewalk gaps. According to PBOT’s description of the street conditions prior to the safety project, three out of five cars drove faster than the speed limit of 35 mph, and one in four drove faster than 40 mph.

This project replaced a car lane with a two-way bike lane, which not only helps people biking but also benefits people walking on the narrow sidewalks on 102nd Ave – people like my family, who have had to cross I-84 using the bridge on 102nd to get to church. Bicycle infrastructure benefits pedestrians by creating buffers between us and car traffic, as well as slowing traffic down by narrowing the roadway. When I was eight years old, I lost my balance on the narrow sidewalk and stepped with one foot into the roadway. My parents could only watch as a truck zoomed by just a couple inches away from my body. Having a bike lane buffer between people walking and automobile traffic going 40 mph has been a lifesaver – maybe literally.

I feel lucky to survive growing up in east Portland because of the dangers on these streets. These projects make me feel more confident that the children walking to church with their parents today will be safer than I ever was.

Guest opinions do not necessarily reflect the position of BikePortland. Our goal is to amplify community voices. If you have something to share and want us to share it on our platform, contact Publisher & Editor Jonathan Maus at maus.jonathan@gmail.com.

Important and fascinating article. Thank you for contributing it Jack, and thanks BikePortland for publishing it.

There’s lots of overlap between universal design and good bike infrastructure. And the safety of pedestrians should always be a higher priority than the convenience of cars. (When PBLs or a greenway diverter or a HAWK or lower speed limits actually puts someone in an SUV in physical danger the way dozens of poor street designs do to walkers and rollers, maybe I’ll be interested in listing to these people who think safer streets are “ruining Portland” etc etc)

Pre-covid I walked down that stretch of road every day on my way home from Gateway TC. It was great having a buffer from the sidewalk to the cars passing on the street.
However, I could never be complacent. Crossing 102nd, even at the flashing lighted crosswalks, didn’t guarantee cars would stop. Also, when trying to cross a couple of the side streets (Morris Ct & St for example) cars would cut across the bike lanes to make their right/left turns without bothering to wait for pedestrians. Even caught cars using the dual bike lanes as right turn lanes.
Bad behavior wasn’t a car driver exclusive, had a cyclist on that narrow sidewalk in the picture riding towards me and wouldn’t get off the sidewalk to go into the bike lane. I had to, otherwise I would have been run over.
So, the improvements are great, but even with them, some drivers and cyclists, can and will still be a-holes that will endanger you.
Keep Alert!!

Just looking at that picture makes me shudder at how much exhaust a cyclist would inhale. There needs to be a study of which is more risky, breathing fumes day after day or the slight risk of getting hit by a car. I’m only half kidding; I have seen reports of the risk of exercising in a scenario like this, and it is not pretty.

That sounds mocking. In that area of NE, many lower-traffic streets don’t connect through, and the ones that do often have speeding traffic and/or no sidewalks. When I was in that area often on weekends, I’d regularly see people walking to and from churches (not the one in the article) on low-traffic streets with sidewalks–so people DO use safer routes IF they’re available.

In other areas, such as SW, there is literally no possible route from homes to churches (or shops, parks, bus stops, etc.) without walking for blocks on busy streets, which don’t even have sidewalks, good lighting, or shoulders.

Some of those people you so flipantly disparage have to walk along Fremont, a “main arterial” that has NO sidewalks to get to their church on 102nd.
Dare you to go out there and watch them pushing a baby stroller and several young kids by the hand. See how you feel then.

I’ve already said I support the expansion of sidewalks and protected bike lanes in east Portland and anywhere else in the city where they are lacking. I feel bad for the kids being dragged to church. The two biggest factors that will influence what if any religion you follow once you’re an adult is where you were born/raised and the religion of your parents. That your religion is a product of the environment you grow up in doesn’t make a strong case for God. Sorry, kids.

I don’t think there’s any reason this comment about religion should be allowed here. It’s irrelevant to the discussion, hostile to people who believe in religion, and doesn’t really make any sense anyway.

Given the prominence the article’s author gives to his experiences being taken to church by his family, and to the current experiences of other families going to church with their children, the “kids being dragged to church” and “Sorry, kids” comments seem especially hostile.

This is but one of the improvements that will be made in East Portland in the coming years.
This is an essential piece of East Portland improvements. With the issues facing the I-205 MUP (real, or perceived), it is the safest way in, and out of that area of Parkrose.
Great article. The East Portland In Motion Plan tried to route bikeways for access to schools and places of worship. https://www.portland.gov/transportation/planning/east-portland-motion

This is a beautiful article, thank you Jack. I apologize for not doing a better job with the comments. I’ll keep a closer eye on it.

This article is great. I never knew about the Sabbath prohibition against driving–one more argument for safe walking routes. Not one that affects lots of people, but on the other hand it opens the possibility that transportation policies that don’t adequately support non-vehicle modes are a form of religious discrimination.

What stood out most was the mention (and photo) of my own greatest fear/complaint about infrastructure–cars speeding feet from people walking, so that the same tripping on a curb– that would at most skin your knee on a playground–could kill you.

I don’t like driving in curb lanes past children or dogs on narrow sidewalks for that reason, and I don’t like riding or walking my dog on places like the Hawthorne Bridge sidewalk where misjudging how close you are to the curb could be deadly. It’s not so much that it’s likely, but that the stakes are so high for a slight mistake, and those locations are so prevalent around town.