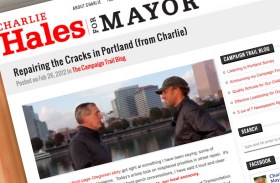 The Charlie Hales campaign has significantly edited a page on their website that explains the mayoral candidate’s priorities on transportation.

Since the end of February, Hales has been parroting themes from an article in The Oregonian that blamed the City’s (alleged) priority on “bike routes” as a main reason why we don’t have enough money to pave and maintain “crumbling roads.” The article was the height of bicycle scapegoating and anti-bike sensationalism perpetuated by The Oregonian. The article received swift condemnation from the Portland Mercury, Mayor Sam Adams (who published a lengthy rebuttal) and the Bicycle Transportation Alliance.

Despite the questionable tone of the article, Hales made it a centerpiece of his campaign’s “roads first” (and by context, bike routes second) mantra. The same day The Oregonian article hit the streets (February 26th), Hales published a page on his website fully endorsing the article.

Given the frailty of our local public narrative around bicycling, I’ve been disappointed to see Hales pander to the The Oregonian’s anti-bike reporting just because he thought it would be a good political move. I’ve discussed my concerns with Hales and his advisors at length in the past several months, but the endorsement of the article remained up on their website. When I mentioned it again in a post last week, Hales defended his position in a comment on BikePortland. I took that as an opportunity to share with the public (via a comment in response to him) why I felt so strongly about his endorsement of the article.

This morning I’m happy to report that, over the weekend, Hales’ campaign edited the post on his website and the reference to The Oregonian article has been removed. Below is the text from Hales’ blog posting as it had read since February 26th (cached version here):

This morning, a front-page Oregonian story got right at something I have been saying: some of Portland’s priorities are out of balance. Today’s article took on misplaced priorities in street repair. It’s about time. In coffees, news interviews and front-porch conversations, I have said it loud and clear: We need to focus on the basics – our children, our streets, our local economy.

And here’s what it says now:

In coffees, news interviews and front-porch conversations, I have said it loud and clear: We need to focus on the basics – our children, our streets, our local economy…

I’m glad to see the Hales and his campaign distance themselves from The Oregonian on this issue. That paper has proven time and time again that, when push comes to shove, they would rather fan the flames of ignorance and divisiveness around our City’s transportation issues rather than address problems and solutions head-on. We need our mayoral candidates and local politicians to do more of the latter. If they do, the public will follow their lead.

In coffees? Does he mean cafes?

I hope so, otherwise it just sounds messy.

FYI: In politician-ese, a “coffee” is an event at which people stand or sit around and discuss topics of interest. It may involve coffee, or more often, wine.

Ah! Had no idea – sort of makes me look silly then!

Though I’d argue that the language on a site that is supposed to be digested by normal people not include “politician-ese” words. Then again I might just be ignorant. 🙂

nope, coffees, as in “let’s sit down and have some coffees”… he verbed it…

I see what you did there. Nice!

I thought your response to Charlie Hales’ comment here last week was masterful, and he seems to have taken it to heart. Bravo!

On at least a couple occasions, Hales has fumbled in his handling of certain ideas expressed in association with or in response to what’s been published in the media.

He came out looking bad in his efforts to clear up the confusion over what was published in the St Johns paper.
With regards to the Oregon road repair articles, he wasn’t careful enough to make an important distinction between the need for road repair and the true causes of the shortage of funding for it.

His comment to the bikeportland story Maus mentions was stale and formulaic. Overall, it makes Hales seem not too sharp.

Probably all that speaking in coffees has something to do with it. Gets all over the place, ruins your keyboard, stains your shirts…

I’m so not voting for Charlie Hales. This kind of backtracking and CYA politics shows a sincere lack of integrity.

That’s kind of funny. Another example of where he’s maybe not watching closely enough what he’s conveying about himself in what he writes. One two-letter word, especially for politicians, can mess up the whole idea being expressed. He probably should have written ‘at coffees…’. Then he wouldn’t have provided such an opportunity for jokes. People should be able to make some mistakes and laugh at themselves though. If you’re a politician, just not too many mistakes, and not the wrong kind.

I think this is a perfect example of the chameleon that Hales is. He doesn’t really believe anything, but will just say what he needs to get elected. Thanks for calling him out on playing both sides Jonathan. It was quite obvious that he was saying he sided with cars in the made-up Oregonian bike lanes versus auto potholes debate. To then backtrack and say that’s not what he meant is very weak. At least Smith has had the cojones to come out and say “Bike infrastructure will not be my absolute top priority”. I can respect that, even if I don’t completely agree with his stance. There are other things in this city that need to get done as well.

And it’s not just bikes by any stretch. The O had a really weird article about he firing to John Spencer by the Timbers yesterday, that looked to alienate the team’s owner from the fan’s. They’re just trying to drub up readership and it’s sad, because there is so much great stuff going on in this city that they could actually report on.

Jonathan, stop helping Hales appear more logical, it might make it harder for Smith to beat him in November. =)

Okay, fine – I suppose less spewage from both sides is better for us all.

Charlie was always good for bikes the last time he was in City Hall, so I took his position on this issue not as anti-bike or anti-bikes spending, but more as endorsing the idea that transportation spending in general needs heavy scrutiny if we can’t even find the cash to keep the streets in good repair. Those ideas are not mutually exclusive, so I’m willing to give him the benefit of the doubt on this one, based entirely on his track record in the 90s. Jefferson Smith has no such track record of supporting bikes and transit to stand on, so I would focus much more on his words with regards to these issues — is it just empty rhetoric and posturing to gain election, or does he actually understand the trade-offs required to balance a budget and deliver services?

Bud Clark didn’t have any track record on transit and biking issues to stand on when he ran, but he did pretty good on them anyway.

Paul, that’s a ridiculous statement. Bud Clark had a significant record of using a bicycle as personal transportation. Not to pander to a group of voters, not to seem hip, but because it’s a fun and practical way to get around. Hales has that same record.

No, it’s not, and you’re missing the point — just because I ride a bike or a bus doesn’t make me an expert on biking or transit issues. My point is that Bud managed to do well with both without previous City Council experience.

I’m not missing the point, but I’ll bite. You’ll agree then that Charlie is a transportation policy expert and has a record that backs that up?

Rep. Smith serves on the House Transportation Committee. I’m genuinely curious about what record he has there advocating for bikes and transit. I assume that had Bud Clark had prior elected experience, you would have expected more from him on this front.

I agree he’s got a background in transportation, which is experience, but that doesn’t necessarily make one an “expert” in the types of transportation issues that Portland needs right now. A lot of people think we need to pay more attention to basics and less on things like streetcar. Charlie is experienced in streetcar, but now he’s talking back to basics.

I don’t know Jeff’s history on transportation in Salem, but it is experience.

Point is, both of them have experience, and Bud didn’t, but he did just fine, anyway. And I would not have expected more from him had he had it.

Experience does not an expert make.

So which is/was the real Charlie & which stance is/was pandering? How do we tell?

When I saw a neighbor with a bumper sticker on his truck that said “CHARLIE RIDES A BIKE” ( and knowing full well which Charlie being referred to) my cynicism ramped up a notch or two regarding Hales. Or five notches, actually.

Where can I get one of those stickers?!

Something I have been heavily promoting to my local City Council was that bike infrastructure could extend the life of city streets by moving heavy motor vehicle traffic away from the edge of the road where it causes the fastest deterioration. Bikes do hardly any damage to roads, and moving motor vehicles away from the edges puts them in areas that have more tolerance for the pounding that motor vehicles cause to road surfaces. More bikes=less potholes.

-Jefferson voted against the highways-heavy transportation gas tax in 2009 (HB 2001), a signature bill of the House Speaker. He was one of only a handful of Democrats to do so (Rep. Nolan was another).

– Jefferson also made making transit stops safer a signature issue for him, an important issue to constituents in his district. His pilot project to introduce classical music at the Max stop coincided with a 41% reduction in crime. (http://www.politifact.com/oregon/statements/2011/jan/22/jefferson-smith/rep-jefferson-smith-says-classical-music-pilot-pro/

And Bud Clark had no elected experience before becoming mayor. http://en.wikipedia.org/wiki/Bud_Clark

You can get a Charlie Rides a Bike sticker from the Hales campaign.

Really stymied by the bike community and their reaction to Charlie. Is this Jonathan leading the lemmings? Charlie Hales has an exceptional record. Ask Mia Birk. I’ve seen him in action, and he is not only a huge bike supporter, he’s effective. Frankly feel that Jonathan is missing the proverbial boat.

(1) If you’re correct, Patty, why did Charlie take down his endorsement of the ridiculous Oregonian piece from his website following the exchange with Jonathan here?

(2) If you have you read Jonathan’s reply to Charlie Hales post here the other day, do you have specific points you want to raise, or disagreements of fact? I’d be interested to hear them.

Asserting something like Charlie is a bike supporter around here is something we like to see substantiated.

So much for BP being un-biased and politically nuetral.